Maritime expert, anthropologist, Malayologist and linguist Horst Liebner shares his deep knowledge of and love for the amazing cultures, language and history of Sulawesi, in which he has immersed himself for so many years.

What brought you to Indonesia and the island of Sulawesi?

Most of what I do has to do with the sea and the people living off it. I was raised in western Germany, quite far from the ocean. My grandfather lived in a north-German harbour town and wanted me to become a ship’s doctor so I could see the world, especially the southern seas. I decided to study Indonesian languages and culture plus social anthropology. When I learned that there were people building wooden ships in South Sulawesi, I applied for a scholarship in 1987 which concluded in building a traditional boat; the one-masted phinisi, without an engine, and sailed it around Sulawesi for a year. I got my M.A. for this in 1993.

I next applied for a research grant to look into what one would call the mental concepts behind Sulawesi’s traditions of boat-building and navigation. To reach the many islands for that research, I used a smaller boat, a seagoing outrigger craft called sandeq. I then sailed her for a couple of thousand miles up and down southern Sulawesi, studying traditional navigation, indigenous stories and manuscripts on the history of the local Sea Gypsies; the Sama people. I decided to leave Germany for good, and became a research fellow at an organisation associated with Makassar’s University, teaching and researching.

When the Government decided to start a ministry for marine affairs, I became involved providing expertise on what people call traditional fishermen, sailors, shipwrights and ships. In 2004 I was invited to visit the Cirebon wreck, a Malay trading vessel that sunk around 970 with a huge cargo of Chinese ceramics on board.

In 2009 I had enough of treasure hunting. A professor at Leeds University offered to write up the Cirebon find for a PhD, and that’s what I did. Then I built a house in Sulawesi.

Tell me about the history of the area and its maritime culture. 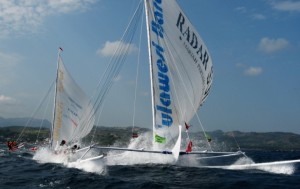 South Sulawesi is a rather late player in the archipelago’s maritime scene. We first hear about Sulawesi sailors and traders in Portuguese records of the early 16th century, and in local historiographies. It began with the Portuguese conquest of Melaka in 1511, and ended with the Dutch conquest of the great city that developed there until the mid-17th century. Makassan and Bugis traders and their Malay associates were the last to stand against the Dutch attempts to monopolise trade in cloves and nutmegs – and with the fall of Makassar many of them fled throughout the archipelago, and even to Southeast Asia, where they slowly rebuilt their trade networks. By the 18th and 19th century, it was mainly the descendants of those emigrants – be they from Mandar, Makassar or the Bugis lands – who became collectively known as ‘Bugis sailors’.

Sailing trading boats or fishing is largely the job of the wong cilik, the famous ‘small people’ of Indonesia. Our neighbours all are Makassarese, not Bugis. That was one of the first surprises when researching Sulawesi’s maritime heritage in the late 1980s. When I visited to collect words related to the ship’s rigging and such, I was given Makassarese terms, a language as different from Bugis as French is from Italian.

Then there are the famous boat builders of Tana Beru and Ara, where most of the so-called phinisi charter vessels are built – and they speak Konjo, a language related to Makassar, as do the sailors of Bira, who man those tourist ships. Another town famous for its sailors is Pallengu in Jeneponto. And the most courageous of all Sulawesi sailors possibly are the Mandar people who live in the north-western part of the peninsula.

Another common misunderstanding surrounds the all-famous phinisi schooners. ‘Phinisi’ actually only denotes the schooner rig, those two masts with seven to eight sails on them. The phinisi rig itself is a rather late development. Despite early reports by English and Dutch captains going back to the early 19th century, the famed shipwrights of Ara in Sulawesi claim they built the first phinisi only in 1906.

Today there are no true sailing phinisi left in Indonesia. All of the wooden cargo vessels now completely rely on their engines, and have at best only one short mast left. Even the last true bluewater sailing ships widely used in Sulawesi, the outrigger fishing craft sandeq, by now are mostly replaced by motor boats.

What is the Sandeq Race Forum and what inspired its formation?

When the sandeq I had built for my research on Sulawesi sailors was launched, we sat looking at her beautiful lines, and I asked the guys what we should do with her. They answered, “A race, from here to Makassar” – and so in 1995 the first Sandeq Race was born. The race became a true marathon regatta, running over more than 300 nautical miles along southern Sulawesi, advertised as ‘the longest, hardest, fastest sailing race for traditional fishermen’.

At the time, in 1995, there still were many big seagoing sandeq around, and all boats following the race were true fishing vessels, only modified for racing by a taller mast and a longer boom. In 2000, the first purpose-built racing boat showed up, and by 2003 none of the participants still used sandeq for fishing – they all had motorboats. Participating in the race had become a major moment of pride for the owners of sandeq and their villages, and it kept the sandeq alive. It even triggered their development: the racing sandeq quickly changed from fairly sturdy seagoing working vessels to true racing machines that, under favourable conditions, can go up to 25-30 knots, faster than the navy patrol boats used to accompany the fleet. The race activities in 2014 prompted Indonesia’s Government to declare the sandeq a national heritage, the second maritime one after the phinisi.

‘Save the sea, save the nation’ is a slogan of yours. When did we lose our connection with the great waters?

It highlights the importance of the sea for an archipelagic country, which only in recent years has become a government agenda. Until the industrial revolution in the western world, maritime technology was one of man’s greatest technical achievements, triggering innovations such as the effective use of naval artillery that allowed western powers to conquer half of the world.

Indonesia’s sailors and shipwrights had to tackle the same problems, and succeeded in building leviathans of ships and navigating them over vast stretches of ocean at a time when European shipping was still clinging to shores. The distinctive technical traditions they developed thousands of years ago are the basics of today’s ‘traditional’ shipbuilding.

Do you believe we can become a more respectful and nurturing culture?

There is this idealistic misunderstanding that only our modern civilisation endangers our natural environment. The ancients were possibly much worse: the hunters and gatherers of 10,000 years ago managed to exterminate various species of animals in the areas they settled, and throughout history most farming societies eventually ran into ecological problems caused by deforestation or overusing water resources. But with so many more people and such advances in technology, our impact on nature has become a problem. Increasing education creates more consciousness about our effects on the environment, and more people are developing technologies that reduce our impact.

To get in touch, email [email protected]