Watch out, Indonesia – our expert epicure is on the move, recently roaming the archipelago incognito to bring you the truth about the nation’s dining scene. No spoon is left unturned in the quest for honest, balanced reviews, from long-established favourites to the hottest new tables in town.

At the birth of the burgeoning Indonesian dining scene, long before any Potatoes got their Heads in Seminyak or Jakarta, Chris Salans was busy being Chris Salans. Though not a small step for him, the American-born, French-raised chef took a giant leap for the nation’s F&B industry in 2001, opening Mozaic Restaurant Gastronomique in Ubud. The multi-award-winning establishment put high-end Balinese fusion firmly on the map.

If you’ve ever eaten there, you’ll know Salans loves his spices – and he speaks fluent fine-dining. But does it translate to the hub-bub vibe of a relaxed, younger-sibling version?

Spice by Chris Salans opened just a few months ago on Jl. Raya Ubud. An ‘all-day dining’ concept, it is a modest-sized, bright space, with bench tables in the big windows. We sat at the bar surrounding the open kitchen, watching the team whizz around preparing our repast.

The usual starter-main-dessert format doesn’t apply here: they’d rather you order what you like, when you feel like; which is fine. But I must quibble with the requirement to place one’s order on a little form with a pencil. It was a cross between a day at IKEA and a multiple choice exam. Quite why this is necessary I’m not sure – this is dinner, not homework. Ever the anarchist, I extracted no small amount of pleasure from circumventing the system and ordering directly from the source as the chefs passed us each dish. 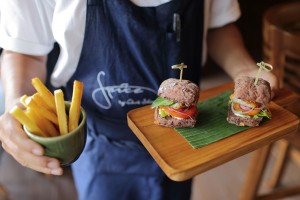 The menu does section itself though, into helpful if somewhat alarmingly-titled groups: Raw, Fins & Shells, and the vegetarian’s nightmare, Two Legs and Four Legs. We ordered several dishes at once, adding a few bits as we went along. As befits Indonesia, everything came when it was good and ready. This resulted in slightly discombobulated sequencing: for example, our side of Tapioca Fries (Rp.35,000, with Basa Gede ‘espuma’ – a chef-y word for foam) came pretty much first. In a relaxed establishment such as Spice, this isn’t a huge problem. Incidentally, this order turned out to be superfluous, since the same wedges accompanied our Steak Sliders (Rp.95,000). The meat on the mini-burgers was ever so slightly chewy, but the bread was good and the flavours worked with the sambal hijau. The fries pretty much did what they said on the tin, and were quite filling. The basa gede (Balinese spice mix) foam was intended for dipping and packed a punch. 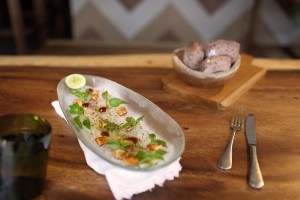 Snapper Carpaccio (Rp.95,000) featured tamarind croutons and a rujak dressing of shrimp paste, palm sugar and chilli. It was refreshing, as rujak should be, and the fish, fresh and tasty. Strangely enough though, the deceptively simple Quinoa and Tomato Salad (Rp.60,000) managed to outshine it, with its tangy Suna Cekuh (garlic and ginger) dressing.

It was a mistake ordering multiple portions of the Slipper Lobster (Rp.95,000), as the ‘per piece’ stated on the menu inexplicably turned out to be three halves. They’re also truly meaty little crustacean beasts. These were crusted with a thick layer of crispy tempeh, an innovative idea, and soaked in a curry-leaf butter – quite a heavy-handed treatment for the sweet, juicy meat, but it worked. This has all the hallmarks of a Salans classic: French base, Balinese top notes. It could be, to some palates, an acquired taste.

From the specials board we tried Laksa (Rp.95,000) and it was good, albeit fairly straightforward. I was surprised to find, however, that although the chef in charge that night was Singaporean (and had spent several years at Salans’ Seminyak outpost), this was not a recipe from his homeland. 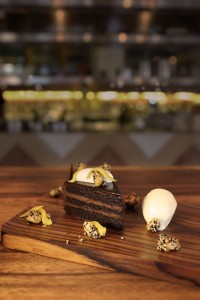 For dessert, unfortunately I was not bowled over by the somewhat unremarkable Chocolate Cake (Rp.55,000), although its accompanying jackfruit ice cream was great, and much more like the Salans I know. Better still was the Kalamansi lime sorbet (Rp.45,000). This unique, tangerine-y citrus fruit is having a bit of a moment on menus across Bali – it’s popping up everywhere, including in our Kalamansi Margarita (Rp.85,000), which was pretty good, as was the Kemangi Gin & Tonic (Rp.85,000). The cocktails could benefit from a little finesse, though I would thoroughly understand if they chose not to refine them – this is, after all, an all-day place, with milkshakes and suchlike on offer in the evenings. I rarely get to say this but you might actually be better going for wines by the glass: I was thrilled to find one of my favourites, Verdejo (a white from Spain), which was super.

The Salans blueprint – i.e., highlighting one or two local ingredients in every dish – was evident throughout. He has managed to distil his ethos into this eatery; albeit less glam, more wham-bam-thank-you-ma’am. There were hits and misses but overall Spice is a welcome new addition to the hip Ubud scene, and there’s no reason why it shouldn’t be successful.

From London to the Jaks: A Fashionista’s Journey