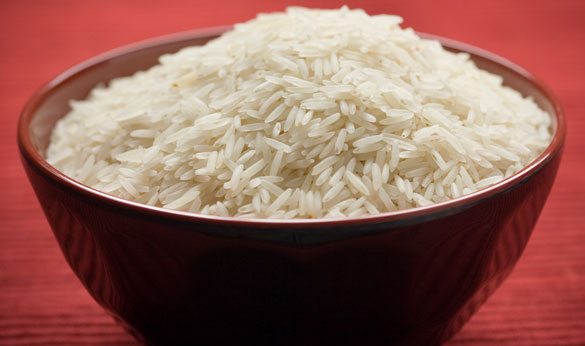 Every society has a staple food: my London upbringing revolved around potatoes, varieties such as King Edwards in winter for baking and Whites for salads. We grew them in our back garden. My mother also made a delicious rice pudding with sultanas and raisins; it was boiled in milk, then baked for a while with a sprinkling of nutmeg on the top.

Later, as an adult, I’d enjoyed the occasional Chinese takeaway with white rice, Indian meals with basmati rice and vegan meals with brown rice bought from the community wholefoods store. Yet, not yet being a traveller, I knew little about the other 40,000 plus varieties of rice – yes, there are really that many, nor that Indonesian alone have about 7,000 varieties, suitable for uplands, lowlands or tidal swamps.

Shortly after I arrived in Jakarta in pre-internet days and began the process of acculturation, I was somewhat taken aback by Indonesian’s obsession with food – meaning rice.

It is thought that around 1000BC rice cultivation spread to the Malay-Indo archipelago from the Bronze Age ?ông S?n (Dongsan) culture centred in the Red River Valley of northern Vietnam. This brought irrigated rice-growing techniques, as well as husbandry skills, buffalo sacrifice rituals, bronze casting, the custom of erecting megaliths, and ikat weaving methods. Some of these practices survive today in the Batak areas of Sumatra, Tana Toraja in Sulawesi, parts of Kalimantan, and Nusa Tenggara.

By the 1st century AD, small kingdoms, collections of villages subservient to petty chieftains, evolved in Java*. The island’s constant hot temperature, plentiful rainfall and volcanic soil were ideal for wet-field rice cultivation. This largely self-sufficient organisation, with surplus rice being stored for communal use in times of drought or festivities, could explain why the Javanese developed a seemingly more feudal society than the other islands. Dry rice cultivation is not such a collective enterprise.

However, the population explosion last century – from c.50 million in 1900 to c.110 million in 66/67 – led to rice shortages. President Sukarno advocated the eating of corn or rats from the rice fields – accounts vary but the populace was unimpressed either way – and the famine was temporarily and partially alleviated by USAID rice aid shipments.

The Bureau of Logistics (Badan Urusan Logistik/BULOG), a government-owned company which deals with food distribution and price control, was originally established in 1967 to purchase rice for the provisioning of the armed forces, the civil service, and state corporation employees. It now monitors and sets prices for a much wider variety of foods. (Since its foundation, Bulog has raised the living standards of farmers, but it’s also proved a much larger source of illicit funding for its managers.) 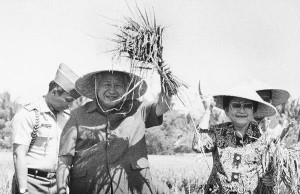 In 1968, Suharto launched his ‘Green Revolution’ aiming for food self-sufficiency. The government provided subsidies for fertilizer, pesticides, and irrigation, which helped to increase yields and production.

By 1978, programs to build up the rural infrastructure, such as irrigation canals, water supply, bridges and roads, amounted to 12% of the national development budget, demonstrating the importance of rice to political stability. This worked for a while; in spite of a drastic drop in production due to the 1975–76 wereng (brown planthopper) plague, by 1984 rice production exceeded domestic consumption for the first time. Suharto was honoured for this by the United Nations’ Food and Agriculture Organization (FAO) in November 1985.

However, Indonesia became a net rice importer once again in 1988 and the rural rakyat was advised to eat ubi (cassava) as their staple food. It wasn’t until last year (2012) that Bulog had “the highest ever rice stocks” with 2.3 million tons, having imported just 700,000 tons.

The ‘Green Revolution’ and the recent move towards genetically modified seeds has had several unfortunate consequences. Farming on an industrial scale with a centralised distribution of insecticides, pesticides, fertilisers and ‘standard’ seeds has reduced the fertility of the soil, with chemicals leaching into the water table via run-offs from the fields. Farmers, who had localised and inherited the knowledge of the terrain they were working, have been displaced, many becoming workers in the fields their families once owned.

In 2007, the government, through national seed company, PT Sang Hyang Seri, launched a major hybrid programme in association with such Indonesian oligarchs as Tomy Winarta and Jusuf Kalla. Since then, many farmers have experienced crop failures because, as Prof. Dr Kasumbogo Untung, an entomologist at the Universitas Gadjah Mada in Yogyakarta said in 2010, hybrid seeds are especially susceptible to pests such as brown planthoppers.

Many farmers have reverted to more traditional methods such as the System of Rice Intensification (SRI). This was developed in India and seen yields per hectare increase by as much as 40%. It is based on eight principles which are different to conventional cultivation. They include developing nutrient-rich and un-flooded nurseries instead of flooded ones, ensuring wider spacing between the seedlings, preferring compost or manure to synthetic fertilizers, and managing water carefully to avoid that the plants’ roots are not saturated.

Another major advantage of SRI is that it relies on local knowledge, which increases the likelihood that the seeds used would be more resistant to prevalent infestations

SBY, who has a PhD from the Bogor Institute of Agriculture, supports SRI because, “it increases production, yet does not damage the environment. We should think about the future of our children [and] the lives of the next generation.” (video: http://srivideo.zoomshare.com)

I’m with SBY on this: support local farmers, not the genetically modified conglomerates.

*Stamford Raffles, in his History of Java suggests that the name is derived from the Sanskrit word ‘yava’, which means barley.

Did you know?
Rice farming is responsible for 14% of total global methane emissions.

No Tricks, All Treats Halloween at Hotel Indonesia Kempinski Jakarta