In less than one generation, the reality of waste in Bali has totally metamorphosed. During this era of globalization, there are now exponentially more plastics, man-made rubbish and hazardous wastes produced than ever before. Though the waste has changed, old attitudes have not. Thirty years ago there was very little man-made refuse. Most throwaways were made of organic materials like banana leaves and ceramic cups and bowls. Villagers would bring their own homemade container to the market.

But waste just doesn’t rot away naturally in the sun anymore like it was left to do in the old days. Throwing trash behind the village (tanah tegal) or in the river was appropriate because organic garbage would eventually decompose and enrich the earth. Because all of the urban migration and economic development are taking place on a relatively very small island, the problems of wastes are all the more accentuated. Like the rest of the developing world, Bali has experienced a huge population explosion. Compared to 3.15 million people living on the island in 2000, Bali now has over 4.1 million residents.

Waste is a misuse of resources that needs to be recovered by using recycling methods such as composting, producing bio-gas from decaying food and recovering plastics, paper, metals and batteries. Fortunately, there are several responsible and licensed operators on the island who provide this very basic but very necessary service.

People who live in both urban and rural areas dispose of their trash in containers that are picked up by the trash trucks from private waste disposal companies or from the Cleaning and Park Services Department (Dinas Kebersihan dan Pertamanan). These companies will take virtually whatever is in your trash bin. When customers have extra waste, coconut husks or heaps of garden cuttings, they just give the truck driver a little extra. Pickup times vary from every day, twice a week or on Saturdays with no pickups on national and Hindu holidays. Monthly fees range from Rp.50,000 to Rp.75,000. The fee for a professional waste management company like Bali Recycling, that processes waste responsibly, is Rp.1 million to Rp.4 million per year. 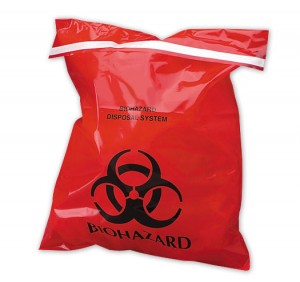 People should be aware that on Bali it’s not uncommon for collectors to buy waste or collect it for free from hotels and restaurants. But after they haul it away, they simply take the more valuable recyclables like cardboard, PET bottles, aluminium and scrap metal, then often just dump the rest illegally. Though the waste and pollution laws in Indonesia are quite good, there’s little enforcement of these laws, so the pollution continues unchecked.

Pemulung (scavengers) and pengepul (scrap/rubbish collectors) are this country’s unofficial recycling system, however they can actually cause pollution by avoiding the costs of proper disposal of the waste they collect. River dumps and mangrove dumps are used by scavengers, private trash collectors, village disposal trucks and others to avoid the costs of transporting waste for proper disposal at bona fide government landfills. Even official landfills like Suwung, just south of Sanur is way over its maximum capacity, with the smell and smoke reaching as far as 6km from the dump itself.

The public, including surprisingly most well-educated resident westerners, are generally ignorant or apathetic about the pollution they produce. Expats know what they are supposed to do, but most don’t actually do it since it’s just easier to have someone take it away and forget about it. Most of Bali’s population is not really aware of the dangers and damage they do by not disposing of waste properly.

Don’t throw old batteries in your regular trash. Containing highly toxic materials like mercury, lead, cadmium and lithium, batteries require special methods for proper disposal so that they don’t contaminate the environment and your health by polluting the air, the ground and waterways. The strong corrosive acids can cause burns to eyes and skin.

Every household in Bali throws AA or AAA batteries out every month. The cumulative effect of tens of thousands of small batteries is extremely damaging. Even spent rechargeable batteries from cell phones, MP3 players and laptops contain toxic heavy metals which can jeopardize environmental integrity of both landfills and present a danger to the public. Car batteries are not disposable like AA and other dry cell batteries, but can be refurbished here by cleaning the terminals, replacing the battery acid and recharging. When car batteries can no longer be recharged, they are sold back to the battery shop when buying a new car battery.

Most of Bali’s waste disposal centres do not accept batteries because they are too toxic, don’t know how to handle them or do not have the permits. Bali Recycling does accept mobile, watch, clock, flashlight and radio batteries. If a business, home or school wants to start disposing of their batteries properly, they need to purchase from Bali Recycling a collection bucket (Rp.450,000), which is collected when full. 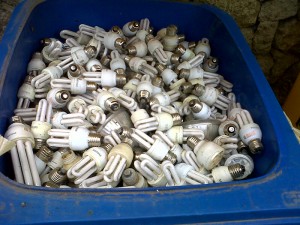 Though car batteries are too large to go into this plastic container, Bali Recycling will collect them for free. All discarded batteries are stored at Bali Recycling in a special area. When enough have accumulated, the batteries are shipped to a partner company, Waste Management Indonesia, for processing, recycling and final safe disposal. Bali Recycling also takes fluorescent lights, old computer monitors, CPUs, laptops, cell phones, disused paint cans, cleaning chemicals, used machine oils and cooking oil. These must be put in a plastic lined cardboard box, metal drum or plastic drum, which Bali Recycling provides.

Send Bali Recycling a list of your highly toxic B-3 Hazardous Waste materials — pesticides, heavy metals (mercury, lead, cadmium, lithium) and PCBs, styrofoam — and they’ll get back to you within two days with a price. Maximum charge is $50.

Bali Recycling also accepts air conditioners and refrigerators if the Freon has been removed. If there’s a problem with a fridge, people just bring it to an appliance repair shop or a repairman visits the house and brings Freon with him to replace the lost Freon. A special pump and tank is used to catch Freon gas.

EcoBali Recycling accepts big plastic bags full of all types of trash, including styrofoam, for a donation of Rp.50,000. For trash collection service, they charge Rp.1 million per year.

If you live on Bali and produce waste, you have to pay to have it taken care of properly. What is needed is a new concept of waste so that our rubbish ends up being used as a valuable resource rather than as a source of pollution. Educating children and the masses about garbage issues is important, but only a practical and effective waste collection infrastructure can create real behavioural changes. People need to focus first on what they are doing at home and in the office. It’s no good telling others to care for the environment if you don’t. By setting a good example for your family, friends and neighbours, others will follow.