Broadway may have its roots in the quintessential iconography of New York City, but the charm, excitement, and artistry of Broadway cannot be contained to just one town. Over the years, Broadway’s shows have merged with Hollywood, and touring companies have managed to spread the wonder of musical theatre to audiences around the globe. Right here in Jakarta, one theatre group has managed to do the exact same thing.

“After moving to Jakarta from the United States 10 years ago, I realized that the one thing I truly missed was the availability of great stage productions. When I began working with Jakarta Players, I decided that my one goal was to provide our audiences with access to some of Broadway’s classics, simply because there was such a demand and interest within Indonesia”, says Keith Allerton (Jakarta Players Veteran and Director). As you can see, the glamour of Broadway has swept the world, and thanks to some dedicated patrons and enthusiasts, has landed right here in Jakarta. 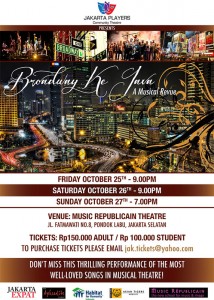 What exactly is “Broadway Ke Java”? The journey begins with two passionate, yet very different theatre connoisseurs. As a proper London critic attempts to educate his audience about the classic and artistic beauty of musical theatre, he is constantly under fire from his down-home American nemesis who thinks Broadway happens to be a little more “gritty”. The two men heatedly argue their respective sides, using beloved Broadway songs to prove both their points.

“We wanted to write a show, with a relaxed atmosphere in which we could get lots of people involved, and include Broadway numbers that would capture an audience’s interest”, says Writer and Director of the show, Ariana Thurow.

Yet as the beautiful, exciting, hilarious, and tear-jerking music of Miss Saigon, Chicago, Les Miserables, and Avenue Q wash across the stage, both men come to terms, realizing that Broadway has it all. In the world of musical theatre, there is a little something for everyone.

“We had one of the biggest turn outs for auditions in Jakarta Players history”, says producer Rose Fredson, President of Jakarta Players. “We manage to keep our returning talent, and have over 20 new faces joining this show, so we must be doing something right.”

So, whether you are from Broadway or Java, this is truly an event that will bring our community together in the name of “theatre”. Expect this show to sing and dance its way into your heart.

Having a Baby in Indonesia