My Indonesian language skills have never been that good. I struggle to put three or four words together and when I can manage that there is no guarantee I can repeat the feat with the same words minutes later. Since I discovered the Benny and Mice comic books my wife says my language skills have got worse!

The language used in the pages that detail the adventures, or misadventures of the hapless couple bears as much relation to ‘standard’ Indonesian as the Geordie dialect does to Standard English. But as with all good cartoonists we can all recognize characters or storylines in the comics, and because we can relate to them and they’re such good fun I stick with them and my dreams of achieving competency in my wife’s language have gone out the window.

Benny Rachmadi and Muhammad Mirad (Mice) are a couple of Indonesian cartoonists who started drawing stuff for local papers in the 1990s, became popular and branched out on their own with a series of comic books that mimic life here so well and so beautifully. With Benny from Samarinda and Mice from Jakarta, they met while they were studying at Desain Grafis Fakultas Seni Rupa IKJ. I grew up with the Beano and Roy Of The Rovers. Plug from the Bash Street Kids was an early hero, he looked so germless and awkward. He seemed so ‘me’.

By the time I moved to South East Asia comics were in big demand but, sadly for me, it wasn’t Dennis the Menace and Billy’s Boots people flocked to specialist shops to read. It was Japanese anime or manga. My early years on the continent are filled with visions of teenagers and businessmen waiting for classes or meetings with their noses stuck in the pages of the latest Japanese export.

Pah! I thought. It’s all beneath me. Why not, part of me enquired but never too much, produce your own comic super heroes. I was new, I still believed the superficial nationalism that was played out in those far off days before krismon (monetary crisis) hit home. It took me a while to realize that everything from abroad was milk and honey, except for IMF bailouts, and everything home produced was fit for the trash can; except for the food and the culture.

The Benny & Mice stories are proof that this theory belongs in the trash can. They follow our eponymous heroes as they journey through life or trends that they see around them, be it Bali, Jakarta or most recently in Singapore.

Benny portrays himself as the slightly more worldly one while Mice is the buffoon who gets everything wrong. 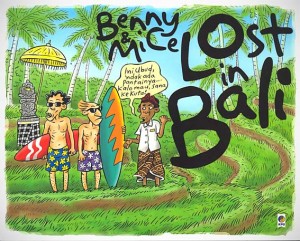 My first encounter came while browsing in a bookshop one day. I saw this cartoon on the front cover and it showed our two dimwitted heroes standing in a paddy field wearing board shorts and holding surf boards. They were looking somewhat lost and a gentleman dressed in the more traditional Bali clothing of white shirt, sarong and cap mutters the immortal lines ‘Ini Ubud, ndak ada pantainya…kalo mau, sana ke Kuta!’ (This is Ubud, there aren’t any beaches. If you want go there to Kuta!) And so begins their adventures on the island of the Gods. Mice is forced into giving a female tourist a massage, both go to the beach wearing jackets, trousers and carrying an umbrella in time honoured Indonesian style while surrounded by sunbathing foreign tourists looking on incredulously.

Male western tourists are portrayed swigging beer walking down the streets of Kuta wearing underpants and singlets while the women are in spaghetti tops and very short shorts. Other tourists are portrayed as riding hired motorbikes with their local girlfriends, the happy couple enjoying a romantic holiday or the culture vulture oohing and aahing every bit of rock that looks like it may have been sculptured. And then of course there are the Indonesian ladies looking for their own ‘bule’.

In case anyone starts feeling a teeny weeny bit sensitive and is looking for an anti western bias, don’t bother. Mice’s antics as the archetypal Indonesian on holiday will have you rocking in the aisles. Whether he is getting high on the scent of flowers and Bedugal, skipping through the scented fields singing ‘The hills are alive with the sound of music’ or slobbering into Pasar Sukawati high on the thrill of shopping, this book, and the others they have worked on, are as much statements about Indonesian society, status and perceptions as anything else.

‘Jalan Jalan Ke Singapura’ sees Benny go solo and change tack slightly. This time the hero is a rich Chinese businessman who has made his money in Android tablets and he decides to take a couple of doltish priabumi to explore Lion City for the first time. But despite his perceived generosity and wisdom the businessman is as clueless as his travelling companions, explaining the inspiration for Marina Bay Sands was a tsunami that threw a fishing boat on top of three palm trees.

There is a wonderful cynicism in Indonesians that I think many of us tend to underestimate, especially if we have ever sat through local TV shows. Add that to a creativity and vitality that is borne of that cynicism and you have the potential for a flourishing counter culture that is the envy of other countries in the region. The movies of Andibachtar Yusuf, the music of Slank and Superman Is Dead, the football fan culture of Bonek, Aremania and Bobotoh, even the punks in Aceh who have been in the news recently as well as the cartoons of Benny & Mice are all evidence of that middle finger attitude.

A Giant in a Little Tiny Package

Indonesia Governors Bringing 1 Litre Water and One Jug of Land To Nusantara.