When Ashley Bickerton left New York City for Bali in 1997 he was a major star on the international arts scene. His trajectory to the top had begun only a decade before in 1986 following a much acclaimed exhibition at the Sonnebend Gallery that launched his career along with three other up and coming artists – Jeff Koons, Peter Halley and Meyer Vaismen. Art critic Grace Gluek would note their rise in a New York Times article (6/7/87) in which she suggested that new trends could be better described as brands than art movements. Her comment on the content and nomenclature of this new watchamacallit was, “Borrowing from Pop, Minimal and Conceptual art, and heavily involved with social theories, it is variously referred to as Smart Art, Post-Abstract Abstraction, neo-Conceptualism, Simulationism or simply Neo-Geo, short for ‘new geometry’”. Others joined but the core group, dubbed the Fantastic Four, after comic book heroes, still held centre stage.

Apparently all the pseudointellectual psychobabble was as Greek to Ashley as it was to Gluek. After ten years in the spotlight he made a potentially suicidal career move when he left the “Zone” (New York) for Kuta Beach, Bali. There he moved into a modest compound deep in the labyrinth of Legian’s back streets and assumed a new persona, Ash, just another surfer. He kept painting of course, but few if any knew about his secret identity. Anonymity suited him just fine. Besides, being a painter was a common if not default occupation among Bali’s expatriates. The main criteria for the job were Bohemian pretensions, an indolent lifestyle and the ability to talk fast. A lack of money and the absence of talent was not an issue because paint, canvasses and brushes are cheap, and audiences easily impressed. 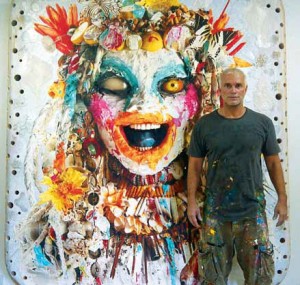 Long touted as a world-class centre of the arts and a magnet for international artists, in truth the island has hosted very few longterm residents who ever achieved international recognition. Bali has mostly functioned as an alternative to those like Theo Meier who dreamed too become Neo-Gauguins long after the original had kicked the bucket. The results are often painful to see. The most notable exceptions are Mexican Miguel Covarubbias and to some extent Walter Spies. In many ways it can also be argued that Bali’s tempting beauty and the expatriate lifestyle is a poisoned honey pot that lures artists and lulls them into a deadly euphoria. For instance when the Italian painter, Renato Cristiano, left Europe in the early 1950s, he was on the cusp of a promising career as a major abstract artist. His works were praised in Italy, Paris and New York and collected by the likes of MoMA, Nelson Rockefeller and Philip Johnson. After a few years in Bali he rejected abstraction and ended up producing sweet images of topless Balinese “Madonna”. His gallery and the collectors were not impressed.

Danger was lurking in the shadows for Ashley as well especially since he had long lived a double life. Born an Englishman in Barbados he was the son of a scholar who specialized in Pigin and Creole languages. Dragged by his father from one exotic destination after another as he studied the syncopated and abbreviated dialects based on the Queen’s English, he was rootless and nomadic by nature. The closest he ever came to having a real home was Hawaii hanging on Oahu’s North Shore in the 1970s. He learned to surf there but was always in denial about it. “I surf”, he would declare, “but I am not a surfer”, to his bronzed long haired surfer buddies. He would continue the ruse in Southern California while attending the California Institute of Art. In a recent biographical rant he writes:

“Then something changed. Was it the handful of Nobel laureates and other such mandarins coming clean as naked surfers? Was it the surfing astronauts, the major media publishers or the indelible images of Richard Feynman banging his bongo drums around the bonfires of San Onofre? More probably it was the second great wave of ‘surf culture’ crashing into public consciousness, this time empowered by its glamorous X-sport association. This new wave made the first one seem quaint with its unapologetic bohemianism, its rat-bag living under piers, its hula-hoops, Gidgit and “The Endless Summer”. This time, surfing arrived in our collective cultural psyche fully matured and now enflamed by the muscle of a multi-billion dollar apparel industry and all that that will buy.”

Out of the closet he declared the truth!

The other truth is that Ashley Bickerton remains a major artist even if he is still the most famous unknown painter living in Bali. When asked in an interview in Art in America magazine (May 2011) if he was connected with the art scene in Bali or the artists’ colonies of Ubud he replied:

“I set up my studio so that when you close the doors it could be a studio anywhere in the world. It could be in Williamsburg or Silverlake. I avoid that washedup-on-the-shores and paint folklorica kind of fantasy. I can’t stand the idea of making art as wispy exotic and escapist kinds of things. It actually took years and years before I faced the elephant in the room—that I was, in fact, living and working in an exotic place.”

While still leading something of a hermit’s life, Ashley’s anonymity has been shrinking of late. When I first heard from surferhistory-elder, Leonard Lueras, that he was living in Legian I was incredulous. “What the Hell is a world class artist doing in the Bali’s equivalent of Tijuana?” I was stunned to see one of his most provocative paintings, “Expats”, a super realistic scene of scantily dressed Indonesian girls, wayang shadow puppets and two thoroughly disgusting disheveled age inappropriate western men in Leonard Lueras’ classic book Kuta and Kuta (2005).

Ashley also became the centre of attention of the more moneyoriented members of Bali’s nouveau riche expatriates in 2008 with the arrival of his old friend the controversial British artist, Damien Hirst. The most expensive living artist, with a large entourage in tow was the major event of the High Season. Everybody knew that Ashley was the man on the inside track.

Things are changing though. During his recent 3rd open studio held in his new funky-surferhilltop-castle with magnificent views of the Indian Ocean, the destination of his newest collection of challenging portraits was not New York but Hong Kong. As he predicted a year ago before to Art in America: “…the energy of the art world has shifted; you can find it in Hong Kong as well as in New York. Bali is, after all, a resort; it’s international and incredibly heterogeneous. Also, artists are like antennae, we can pick up information and ideas from all over the place.”

Exuberant and often borderline Surrealistic, most of Ashley’s realistic work can be easily classified as portraits or scenes. While their imagery is complex his are easy to describe superficially – a yellow outrigger full of characters dressed in extraordinary costumes floating atop crystal clear blue tropical waters. As you stare at them, however, deeper ideas and feelings begin churning leading to a labyrinth of conundrums.

There are those who prefer to see him as a latter day Hogarth making biting- satirical commentaries on our values and society. While Ashley vehemently denies any moral or didactic content his often-impish grin always gives pause for thought. Ironically others have accused him of being sexist and neocolonial for depicting women as objects of lust. It would seem sometimes that art critics and curators have nothing better to do than speculate on all sorts of improbable hidden messages. What is clear is that he is a mature artist who always follows his own intuition. There is also a strong biographical element in his works best seen in his partial alter ego, the blue man, who he created early in his career. In his last incarnation he was a fat lustful hedonist. While many of his work display sheer unadulterated joy, others like his recent series of portraits contain a strong dose of the shadow world. The nearly identical girls with their huge luminous eyes are both innocent and seductive but also ultimately menac ng. His take on the dichotomy is perfectly summed up in his own monologue:

“Ernest Hemingway spent inordinate amounts of time prattling on, both in screeds and on bar stools, about the impossibility of reconciling his physical and mental worlds. Such reconciliation is no mean feat in our world of ever intensifying specialization. For the pre-historic hunter-gatherer of course the two worlds were seamless and inextricable. The long-term trajectory of my own work has always been at the mercy of these contradictory forces. Whereas on the one hand there is a periodic need to throw oneself into the bubbling cacophony that is the scream of our species just needing ‘to be’, there is also the periodic recoil, a reflexive demand to place oneself in a bereft mental landscape where the audibility of human voices is reduced to its lowest ‘credible’ level.”

I assume that he supplies how to use instructions with each work of art. Open your mind and you never know what you may find. Do not ask questions if you do not want to hear the answers. Welcome Ashley.