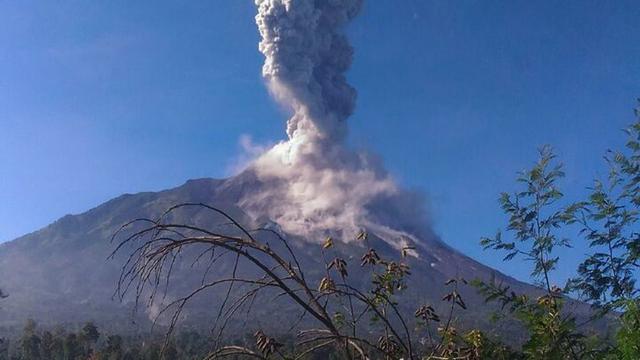 Mount Merapi has erupted with smoke reaching up to 2,000 metres, on the morning of Saturday 28th March 2020 morning.

The Research and Development Centre for Geological Disaster Technology (BPPTKG) in Yogyakarta confirmed the seismogram recorded the eruption of Merapi which occurred at around 5:21 am for 180 seconds with an amplitude of 50 mm.

This eruption is the third occurrence since Friday when the ash cloud peaked at around 5,000 metres. The first eruption occurred on Friday at 9:46 pm and was followed by a subsequent eruption at 10:46 pm up to 1,000 metres. Merapi also briefly erupted about three weeks ago, on Tuesday 3rd March 2020, with the height of the smoke reaching up to 6,000 metres.

Until now, BPPTKG maintains the status of Mount Merapi on Level II or alert. The institution, under the Ministry of Energy and Mineral Resources, also advises against mountaineering activities for the time being, except for investigation and research purposes related to disaster mitigation.

Meanwhile, residents around the area are banned from conducting activities within a three-kilometre radius of the summit of Merapi. The Ministry of Transportation commented on the operation of Adi Sucipto Airport in Yogyakarta and Adi Sumarmo Airport in Solo and confirmed that both are running normal services.

“For the safety of flights, we are still continuing to monitor the development of Mount Merapi eruption,” said Director General of Air Transportation Novie Riyanto.