An environmental movement against the planned reclamation of water and mangroves for large-scale development in Benoa Bay is uniting conservationists, musicians and youth in their efforts to stop the project.

“Music has always been a matter of energy to me, a question of fuel. Sentimental people call it inspiration, but what they really mean is fuel,” the American counterculture writer Hunter S. Thomson once said. Music is a powerful tool indeed, and in Bali it is spurring the community to stand up against overdevelopment and environmental degradation.

United by love for their island home and music, some of Bali’s top bands are joining forces with youth to oppose the Benoa Bay land reclamation project. Led by investment group PT Tirta Wahana Bali International (TWBI), the project would see around 838 hectares of the area’s shallow water turned into a chain of connected islets to house resorts, golf courses, nightclubs, a theme park and even a Formula One circuit.

Specifically, the development plan has sparked a protest movement called Forum Rakyat Bali Tolak Reklamasi, or ForBALI, a coalition of academics, artists, musicians, religious leaders and farmers angered by the rampant overdevelopment of the island.Some of the island’s most renowned bands, such as the punk outfit Superman Is Dead, and the folk and pop group Nosstress, have joined the fight, and for the past three years have been using their celebrity status to attract young anti-reclamation warriors.

Nosstress has even written a protest song, which has since been performed by numerous other Bali bands. The lyrics ‘Build Bali, subsidise the farmers. We all eat rice, don’t need reclamation’ go a long way to voice the sentiment of dissent currently reverberating through the island. “The movement is definitely gaining momentum. Farmers, the majority of students, as well as the community at large, are all actively resisting the reclamation,” says JRX (Jerinx), the outspoken drummer and songwriter for Superman is Dead and the celebrity face of ForBALI. “I am optimistic about our struggle against the rulers and greedy businessmen. The universe isn’t blind, and in Bali money isn’t God.”

THE ISSUE
Environmentalists have warned that the artificial islets, which would consume 75 percent of the bay’s area, could cause severe flooding. Conservation International Indonesia Executive Director, Ketut Sarjana Putra, said that the seawater levels in the area could increase by as much as 1.6 metres, potentially affecting the nearby low-lying areas. The project would also destroy the area’s mangrove ecosystem and deprive local fishermen of their livelihood.

Benoa Bay used to be protected under zoning regulations, but Presidential Decree No. 51/2014 issued by former Indonesian President Susilo Bambang Yudhoyono turned the bay into a business zone and gave the development project the green light. Bali Governor, Made Mungku Pastika, is also a vocal advocate of the proposed man-made network of islets. 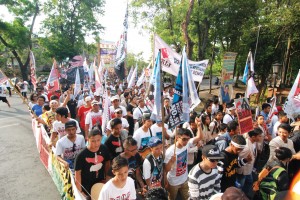 THE GOOD FIGHT
Under the banner Bali Tolak Reklamasi (Bali Rejects Reclamation), ForBALI has been staging monthly demonstrations and live music events to raise awareness about the dangers associated with filling in the environmentally sensitive estuary, as well as to urge the Government and investors to stop the project.

And while it is the conservationists and environmental experts who are guiding Bali Tolak Reklamasi, it is the youth who are spurring the movement on with their dedication and energy.

“Bali Tolak Reklamasi is one of the biggest environmental movements in the history of Indonesia. No other eco-movement has had the energy to organise monthly street protests of up to 3,000 people. It’s so good to see that it is Indonesia’s youth who make up a lot of this number,” says Rudolf Dethu, a writer and socio-political activist who will lead the discussion about the Benoa Bay reclamation plan at this year’s Ubud Writers and Readers Festival. A former manager of the influential Bali band Superman is Dead, Dethu has been a major player in attracting young anti-reclamation warriors to join Bali Tolak Reklamasi.

“It’s not easy to kill a grassroots movement such as this one. We are not doing this for money but out of passion. Everybody is so dedicated,” Dethu says. “It is the youth who are behind all the Bali Tolak Reklamasi banners on the streets. Interestingly, those always disappear when Jokowi, or some other important figure, visits Bali. It doesn’t matter because they soon reappear again.”

ForBALI holds regular seminars in banjar (community centres) around the island to educate Bali’s youth about the perils of uncontrolled development. Those who learn about the detrimental consequences the Benoa Bay development would have on the environment usually become active opponents of the project.

Man Angga from the band Nosstress, who got involved in Bali Tolak Reklamasi almost three years ago, says that while many young people are initially attracted to the movement because of the live music events and what he refers to as the “coolness factor”, they quickly learn about why the Benoa Bay project would negatively affect Bali’s environment and culture.

“It’s great to see the kids turn into eco-defenders. They love the music, but they also realise that there is so much more behind it,” Angga says. “I am certain of one thing – if the movement hadn’t existed, Benoa Bay would have already been partly filled.”

The demonstrators hope that Indonesia’s President Joko Widodo revokes the controversial decree issued by his predecessor, which removed Benoa Bay’s protected status and let TWBI press ahead with the project.

“I still believe that Jokowi is a good guy. We can’t say that we don’t trust him, but we don’t trust him 100 percent because we don’t think that right now he has enough power to do much about this,” Dethu says. “Nevertheless, we won’t stop petitioning him about how important it is for Bali’s future that the presidential decree passed by SBY is revoked.” 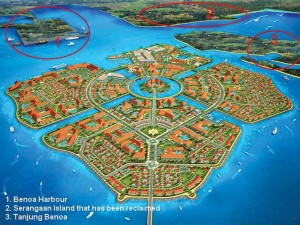 A TEST FOR INDONESIA
This would have been unheard of before the fall of President Suharto in 1998 – thousands of protesters taking to the streets of Bali to rally against a project that would see an environmental estuary turned into a cacophony of noise and lights.

“We are definitely heading in the right direction,” Dethu says. “I am so happy that we have the opportunity to use our freedom of speech and expression to do good. In the early days we were always threatened by thugs. Since Bali Tolak Reklamasi has grown, we have had no more direct threats when we go out on the streets.” And the movement is spreading, not just throughout Indonesia but also internationally. Anti-reclamation demonstrations have already taken place in Indonesian cities such as Jakarta and Malang, as well as in Washington D.C in the United States.

“We will keep fighting,” Dethu says. “If we are successful in stopping this project from going ahead, we might just set a precedent for the whole of the country.”