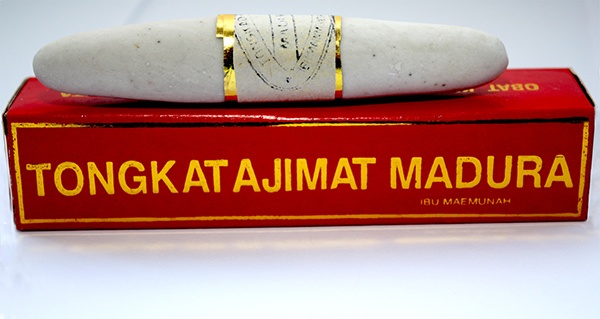 Madura women are famed for their ability to enhance sex by clenching their vaginal muscles. Some even take sexual gymnastics courses with herbal remedies.

Women from the arid island of Madura, east of Java, are famed for their ability to enhance sexual intercourse by the rhythmic clenching of their vaginal muscles. Some even take classes in sexual gymnastics to learn this supposedly secret technique, which has been passed down through generations over hundreds of years. Many also use tongkat Madura, a cigar-shaped rod made from limestone and various herbal extracts, which is said to cleanse, tighten and dry the vagina.

Why a dry vagina? Actually, the aim is not for complete dryness but rather for tightness, which is partly achieved by reducing vaginal discharge and secretions. Many Indonesians believe a really wet vagina makes for unsatisfying sex. Thus, women are advised not to eat pineapple, cucumber or watermelon, as these foods are reputed to cause wetness. After childbirth, a woman may be encouraged to take various potions to restore the tightness of her vagina. The point of all this is to please her husband, so that he will be less likely to abandon her in favour of a younger woman. The reasoning is that if a husband fools around, it is entirely his wife’s fault for failing to satisfy him in bed.

This sort of ingrained cultural sexism is up there with telling women they should have light skin if they want to be more attractive. There are even products for whitening the labia. The many herbal tonics, pills and gels for tightening the vagina have names such as Sari Rapet (Essence of Tightness), Galian Rapet (Tight Digger), Rapet Wangi (Tight & Fragrant), Jampi Rapet (Tightening Spell) and Empot-Empot Ayam (Tight as a Chicken’s Arse). These concoctions are a growing industry, raking in millions of dollars a year. Tabloid newspapers are stuffed with adverts for such products and local aphrodisiacs, which take up entire aisles in some supermarkets. Many traditional healers offer tightening treatments, often with Islamic themes, reinforcing the notion that it is a woman’s religious obligation to serve her husband’s sexual needs by having a taut, virginal vagina. Tongkat Madura, which is marketed online under names such as ‘virgin stick’ and ‘tightening soap’, has gained minor popularity in Japan but is yet to make major inroads into western markets, perhaps due to cultural differences and a lack of clinical testing. It has penetrated Saudi Arabia, according to vendors in Central Jakarta. “My main customers are Arab men. They buy in bulk and take it back home to Saudi,” says Susi, who sells a range of aphrodisiacs at Senen market. “When Saudi Customs question them about it, they say it is a foot scrub product.”

The tongkat (which literally means ‘stick’ or ‘rod’) is about 8 to 10 centimetres long, with a diameter of 1 to 2.5 centimetres. It is made primarily from limestone calcite mineral, purportedly combined with a variety of herbal ingredients. Calcite is astringent, meaning it causes body tissues and canals to constrict; hence the tightening power of the tongkat.

As for the herbal components, one of them is reputed to be high in testosterone, which may explain why some Madurese women are regarded as a bit wild. The ingredients are all marketed as being pure and found only on Madura, although some tongkat are now made in China. One vendor says most of the ingredients come from Kalimantan. “Madura is small and too dry. How it could supply everything?” Each stick is hygienically sealed in plastic and has a cigar-like band of authenticity around the centre, as well as a brief instruction manual in Indonesian, Chinese and broken English. They smell a bit like incense sticks.

See: Despite Cultural Conservatism, Hooters to Open in Jakarta

Vendors claim the tongkat will stimulate and intensify mutual excitement during sex. It is also supposed to eliminate vaginal discharges, irritation, yeast infections and odour. Directions for use are as follows: Wash your hands, your vagina and the tongkat. Insert the tongkat at least 5 centimetres into the vagina, keep it there from 15 seconds to 2 minutes (depending on efficacy for the individual user) and then slowly remove it. Wash and dry it after use. Apparently it works best when used anywhere from 5 minutes to 1 hour prior to intercourse. The sticks have an advertised lifespan of three to six months, or shorter if dropped and broken. The price of a tongkat ranges from just Rp8,000 all the way to Rp700,000, depending on the brand and the vendor.

Another traditional remedy for purifying and drying the vagina is kendedes, which involves sitting on a special chair with a hole in the seat, beneath which is a charcoal fire of aromatic herbs creating a fragrant steam. Some men complain the resulting smoky fragrance is anything but pleasant.

There are concerns that reducing the vagina’s natural lubrication could be detrimental to reproductive health and increase the risk of disease. A dry vagina is more likely to get scratches or lesions during intercourse, which heightens the likelihood of infection with sexually transmitted diseases, including HIV/AIDS. There are plenty of temptations for philandering husbands. Alongside the tabloid ads for vagina-tightening products are numerous listings for freelance prostitutes, as well as brothels advertised as massage parlours.

The Indonesian government has generally been unwilling to investigate the efficacy and possible dangers of traditional vaginal medicines. Instead, the Health Ministry’s Drug and Food Control Agency registers such products without bothering to clinically test them. Foreign websites flogging tongkat Madura at least carry health warnings, if only for legal reasons. They advise buyers not to use the rod during menstruation and pregnancy, and warn that it cannot cure sexually transmitted diseases.

Some Indonesian women are sceptical about the powers of the tongkat Madura. “My friends and I tried it a few years ago and it did nothing, apart from maybe clearing up a yeast infection,” says Nurani, a Sumatran businesswoman. She says vaginal tightening can be achieved simply by clenching exercises, which are known as Kegels.

Dr Arnold Kegel was an American gynecologist who in 1940s developed pelvic muscle exercises to help women control incontinence after childbirth. He noted the exercises also improved sexual feeling. For women wishing to try these exercises, here’s a quick guide. First, next time you pee, try to stop midstream without contracting your buttocks or thighs. If you can do this, you have located your pubococcygeus muscles, which support the bladder and anus. After holding for a few seconds, continue to pee. You can also try to imagine you are restraining flatulence. Once you have isolated the muscles, practice clenching and unclenching them (without peeing), holding for 5 seconds at a time. After mastering that over a week or two, you can then increase to 10 second sets and eventually try it during sex.

Madurese women say Kegels is just another name for something they have been practicing for centuries. Yati, who works at a traditional beauty salon in West Jakarta, boasts that when it comes to making a man happy, Madurese women have the most experience and skills. Contrary to my opinion that it’s still a man’s world in Indonesia, Yati says tongkat Madura is all about giving equal pleasure to women.

Kenneth Yeung conducted no physical research for this article.

A Staycation in Surabaya