Jakarta is growing and changing rapidly. The capital city is running out of space, public infrastructure is being tested to its limits, and environmental conditions are worsening. It seems an uphill battle. Almost daily the newspapers report about Jakarta’s notorious traffic jams, severely polluted rivers and canals, and frequent floods that inundate the streets and bring traffic to a grinding halt. But the tides are about to turn, and the revitalization of Jakarta may be within reach. It all is a matter of perception.

By addressing the problems in a wider context new solutions have been found, and by focusing on new opportunities once the problems have been solved, stakeholders are ready to translate their shared visions into joint actions. Like the synchronization of different instruments in a philharmonic orchestra is based on a composition, the joint actions for the revitalization of Jakarta needs to be guided by an integrated concept that serves as a common framework for the individual players.

Jakarta is located on the northern coast of the Island of Java in a delta of 13 rivers which discharge into Jakarta Bay. The city is growing fast, and changing even faster. The urban population has rapidly increased from about two million in 1945 to over 9,7 million in 2010. Due to lack of space urban sprawl has spilled over the municipal boundaries into the adjacent suburbs resulting in one of Asia’s largest urban agglomerations of over 30 million, also referred to as Jadebotabekpunjur, and urban growth is likely to continue in the foreseeable future.

Modern office towers, luxury shopping malls and high-rise apartment blocks pop up throughout the city, dwarfing the one and two-story structures in the traditional kampung areas and historic neighbourhoods. Flyovers, tunnels and double-deck highways attempt to stay one step ahead of the everincreasing fleet of cars and motorcycles. The international seaport of Tanjung Priok and the international airport of Soekaro Hatta are modernizing and expanding their capacities to keep pace with the growing volumes of import and export goods, and numbers of passengers.

As the wheels of the buzzing economy turn into higher gears, the limits of urban growth are being tested, as evident from Jakarta’s notorious traffic jams that clog the city’s road network, the severely polluted rivers and canals that flow through the city and discharge their water into Jakarta Bay, the deteriorated living conditions in many densely populated kampung areas, and the floods that inundate the streets. There is a bigger and potentially fatal problem looming: Jakarta is sinking. 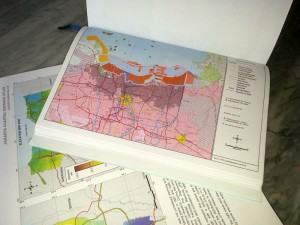 During the last four decades, northern Jakarta has been affected by severe land subsidence at an average rate of 5-10cm per year, and in some locations along the coast, over 20cm per year. Bridges that used to be high enough for boats to pass under now touch the water with their bellies. Land subsidence is mainly attributed to excessive deep ground water abstraction by industrial enterprises, commercial firms and apartment complexes, which are not connected to the municipal piped water network. In 1970 only 12 % of the land in northern Jakarta was below sea level, in 2010 almost 58% of the land had already sunken below sea level. At this rate, in 2030 over 90% of northern Jakarta will be below sea level.

As a consequence of land subsidence, the coastal zone of Jakarta is simultaneously exposed to flooding from the sea, rivers and rainfall. If land sinks below sea level seawater can flow in during high tides, while the outlets of rivers and canals can no longer freely discharge their water into the sea. In that case seawater will inundate the land behind the sea dikes, river water will flood the riverbanks, and streets will be flooded by local rainfall due to insufficient drainage and retention capacity. In recent years floods have occurred more frequently, affecting more locations and larger areas, and lasting longer. Without effective intervention, a quarter of Jakarta may become permanently inundated within the next 15 to 20 years, not only affecting the four million people who live and work there, but also vital infrastructure including the seaport of Tanjung Priok, the airport of Soekarno Hatta, power plants located on the coast line, toll roads, industrial zones, residential areas and business districts, and the historic inner city of Batavia. Year after year the flooding of northern Jakarta causes numerous casualties as people drown or are affected by diseases, staggering financial losses due to physical damage and loss of property and income, and major economic disruption as traffic comes to a grinding halt.

Until recently flood prevention measures have mainly responded to the flooding problems without anticipating the potentially catastrophic effects of land subsidence that will cause new sea dikes on the coastline to sink together with the land on which they are built, as long as land subsidence due to deep groundwater abstraction continues. The situation may even worsen, since new sea dikes, which are intended to prevent flooding from the sea, would also close off the river and canal outlets. As an inevitable consequence, the coastal zone would become inundated by severely polluted river water that has nowhere else to go. To prevent massive inundation, a retention pond of 100 to 150 km2 would need to be built from where water would need to be pumped out into the sea, which would be impossible in the densely built-up coastal zone without massive resettlement. With no technical solution in sight, serious discussions started about moving the capital to a safer location.

For the purpose of understanding the flooding problems in a broader context, searching for strategic solutions, and mobilizing the concerned stakeholders, the so-called Triple-A concept was applied. This comprising an Atlas, an Agenda and Aturan-main (Rules of the game), prepared with the participation of multi-stakeholder task forces as ‘players’, supported by an expert team in the role of ‘coach’. The multi-stakeholder task forces include government institutions at municipal, regional and national level responsible for management and planning of the national capital, private developers and business investors with a vested interest in coastal development, and civil society organizations representing concerned urban communities and special interest groups. The Triple-A documents, which are public domain, have been made available as printed documents and in digital format.

The Atlas systematically bundles information about flooding itself and preventive measures, but also identifies the underlying causes of flooding, and describes how insufficient piped water supply has prompted people to pump up deep ground water, which in turn has caused land subsidence, and how uncontrolled discharge of human and industrial waste have severely polluted the water of rivers and canals that cross the city and discharge in Jakarta Bay. Viewed in a broader context it all adds up logically: If the pollution of rivers and canals could be reversed, there would be enough clean water to substitute the excessive groundwater abstraction by piped water supply. If ground water abstraction could be halted, the land and the dikes that are built on it would no longer sink. Instead of building new dikes and water retention on land where space is scarce, they could also be built offshore in Jakarta Bay. As the pieces of the puzzle started to fall into place, a new picture emerged of an integrated development concept. 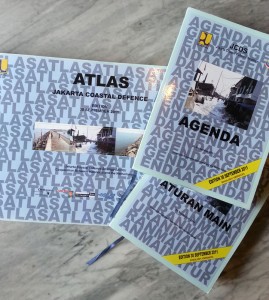 The new picture is reflected in a strategic Agenda that articulates the shared visions and priorities of the stakeholders, and presents the joint strategies and synchronized action plans:

• Technical solutions that are effective in flood prevention (system of parallel offshore sea dikes which can be built in stages, and improved river dikes along the downstream river banks, offshore retention ponds between the sea dikes to collect water from the rivers, and pumping stations to keep the water level in the retention ponds lower than the river outlets);

• Private investment opportunities to make the overall scheme financially feasible based on cross-subsidies and public – private partnership (land reclamation along the coast, toll roads and railways on top of the offshore sea dikes, and expansion of the harbour of Tanjung Priok with deep sea port facilities).

The integrated concept will not only protect northern Jakarta against flooding, but will also solve its drinking water shortage, reduce river pollution and improve the traffic circulation throughout the city, turning Jakarta into a more attractive place to live, visit, work and invest. Following a general consensus on the integrated development concept for the revitalization of Jakarta, the time has come for concrete action based on a concerted multistakeholder endeavour.

The Aturan-main (Rules of the game) lay out the mechanisms for planning, investment and implementation of the integrated concept involving the stakeholders in every step of the process. Infrastructure related to sea and river dikes, retention ponds, pumping stations, water supply and sewerage systems generally depend on public funding. On the other hand, land reclamation, toll roads and deep seaport development can be considered as profitable investment opportunities for private developers. If combined, the overall scheme would be financially feasible, provided that the project is implemented as an integrated concept, and that multi-source funding is orchestrated based on sound public-private partnership arrangements.

The Triple-A documents that summarize the concept for the revitalization of Jakarta can be found via Google under JCDS Atlas, JCDS Agenda Strategy and JCDS Aturan Main.