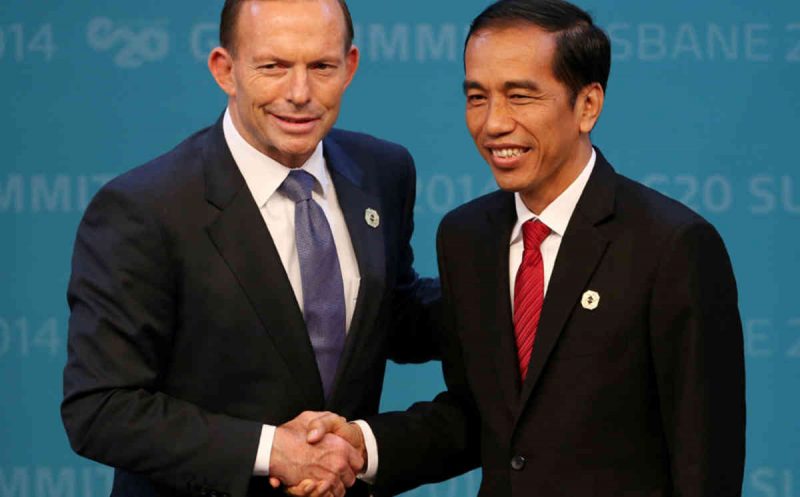 Australian indignation against the death penalty was never going to save a couple of drug traffickers from the firing squad in Indonesia — and that was entirely the point. The executions were merely a political tool, shamelessly exploited by both countries.

February 8: Australian Prime Minister Tony Abbott’s popularity was at a record low, prompting his party’s executives to hold a vote on whether to dump him as leader. Many commentators predicted he would be finished by the end of the month.

Both leaders desperately needed a diversion to restore their credibility and popularity. Bring on the two Australian drug dealers on death row, Andrew Chan and Myuran Sukumaran. Abbott was able to play the role of a caring, tough-talking leader, desperately trying to save their lives. His popularity surged. Jokowi was also able to act tough, showing that Indonesia cannot be dictated to by Western countries. Win-win for Abbott and Jokowi. A loss for the two pawns, but Australia had already signed their death warrants back in 2005 when it informed Indonesian police of the plot by nine Australians to smuggle 8.3 kilograms of heroin out of Bali. Australia has no one to blame but its own police and government, and the drug traffickers themselves.

The public outcry from Australia was one of the most cringeworthy things I have ever witnessed. It was reminiscent of when a substantial portion of the British public mourned the 1997 death of Princess Diana in a car accident. British media and politicians milked her demise for all the emotions they could. In the case of Chan and Sukumaran, the Australian media and politicians vigorously fanned the flames of public outrage, inciting anti-Indonesia sentiment as they tried to transform the criminals into angelic martyrs.

Minutes after the two were executed by firing squad on April 29, along with six other convicts, Australian keyboard warriors began posting racist threats of retaliation. “Let the war begin. You indon better stay away from Aussie public especially if you wear jilbab,” declared one of the less vulgar comments on The Jakarta Post’s website. “Let’s f—ing lynch some Indonesians in Australia,” read another.

Well done, Tony Abbott, for bringing out the worst in your country’s people for the sake of your political survival. And well done, Jokowi, for fostering the impression that those who support the fundamental right to human life, by opposing the death penalty, are attacking Indonesia’s national sovereignty.

If Australians want to take the Indonesian judiciary to task for its shortcomings, there are many cases more worthy of attention. For example, the unresolved murders of human rights activist Munir, labour rights activist Marsinah, and journalist Udin. Or the mass rapes of ethnic Chinese women and girls in 1998. Also, if Australia is so totally opposed to the death penalty, where was the chorus of condemnation when three of the terrorists behind the 2002 Bali nightclub bombings (that killed 88 Australians) were executed in 2008? Far more people are executed in China, Iran, Saudi Arabia, Iraq and the US, than in Indonesia.

Indonesians have a strong sense of retribution for criminals. Apart from a few leftist colleagues and friends, it was almost impossible to find Indonesians who thought clemency was a good idea. From market slums to high-rise office towers, people spoke overwhelmingly in support of the death penalty.

There was some sympathy, of course, for the Filipina maid, Mary Jane Veloso, who was granted a last-minute stay of execution. She claims she was tricked into smuggling 2.6 kilograms of heroin into Indonesia. As for the other people executed on April 29, they received comparatively little media attention. Least of all, the four Nigerian drug smugglers. It was as if their lives
were worthless.

Australia’s deliberately clumsy megaphone diplomacy over the executions, as well as protests from other countries and the United Nations, were gold for Indonesia’s self-serving politicians. When corrupt politicians are embezzling funds, leaving the country with deplorable infrastructure – and when police and judges oppose efforts to quash corruption – it’s great to pretend that foreigners are to blame for Indonesia’s problems.

“Many Indonesians still suffer from a huge inferiority complex and blame the country’s travails on foreigners or neo-colonialism,” says an international aid worker based in Jakarta. “Then they use it as an excuse to keep the door shut. This is a ruse that’s being used by the elite to help them avoid competition and to allow them to hang on to their vast privileges. We didn’t see Jokowi say anything in his Asia-Africa Conference speech about rich Indonesians who don’t pay their taxes; he only blamed the IMF, the World Bank and ‘rich’ Western countries.”

It’s also convenient to pretend that foreigners are to blame for Indonesia’s drug problems, especially when narcotics are produced inside state penitentiaries and can be purchased at premises that claim to enjoy protection from state security forces.

Some expatriates feel there is a rising tide of anti-Western sentiment in Indonesia, manifested by the executions, dubious convictions of foreign teachers accused of rape, tougher residency permit regulations, and recent raids by Immigration against foreigners not carrying their passports.

This sense of persecution may be misplaced. Although foreigners have been unfairly targeted in some cases, there’s unlikely to be any concerted campaign to drive Westerners out of Indonesia. Just the usual greed and politics. Meanwhile, we can expect further executions of drug dealers for as long as Jokowi views mercy as a weakness.

We often read that “the death penalty doesn’t work”. I was a high school student in Australia in 1986 when two Australians, Kevin Barlow and Brian Chambers, were hanged in Malaysia for heroin trafficking. Their executions made a generation of Australians aware of the risk of drug trafficking. Likewise, the latest executions will likely dissuade more Australians from contemplating smuggling narcotics through Indonesia.

A SHORT HISTORY OF EXECUTIONS
Executions were rife in Indonesia following the abortive coup attempt of October 1, 1965, blamed on the Indonesian Communist Party (PKI). Hundreds of thousands of people suspected of leftist tendencies were killed or arrested. Of those detained, only about 1,000 were ever brought to trial. They were subsequently sentenced to lengthy prison terms or death.

Hundreds of separatist rebels and their supporters in Aceh, East Timor and Papua were also slain in extra-judicial killings by state security forces during former president Suharto’s regime.

Suharto also targeted street hoodlums for informal execution. Between 1983 and 1985, state-sponsored death squads killed about 5,000 alleged criminals. Often the bodies were left in the streets. Suharto described the killings as “shock therapy”
to bring crime under control.

Since 1978, Indonesia has officially executed 79 people, including 14 so far this year. There are about 100 people on death row. Most of those sentenced to death are poor people, convicted of drug offenses, murder and terrorism. Wealthy murderers and drug barons rarely go to jail for long.