More than twenty years ago, I went to Ragunan Zoo quite often with my children. It made for a pleasant walk, shaded by trees and the animals adding to the fun. It even became the venue of a birthday party where the children had to find the answers to multiple-choice questions I had drawn up and printed on a map of the route we were to follow: what’s the difference between a leopard and a tiger?—(1) a tiger has dots, a leopard is striped, (2) a tiger has a tail, a leopard has a tail, (3) a tiger is striped, a leopard has dots, was one of them.

A few months ago, I went there again, this time with the subsequent generation, my grandson. We must have taken not only a wrong entrance but also a wrong turn because we found ourselves in a rather empty part of the zoo, and the only attraction that excited him was a children’s playground that required an additional entrance fee. It did tire him out and we had to head home before we could find more animals or the Schmutzer Primate Centre I had heard so much about.

Ragunan Zoo, covering 147 hectares is huge, but its 50,000 trees provide sufficient cooling shade to make it a wonderful park for wandering around leisurely. The Primate Centre was officially opened on 20 August 2000 and is promoted as an international-class zoo with an important role in primate conservation. As I had not even been near it on my previous visit, I decided to visit Ragunan again. 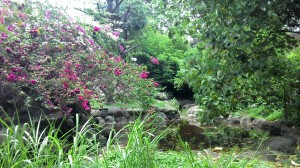 After paying the Rp.4,500 entrance fee I entered, this time from the North Gate, and with the map obtained at the ticket counter, I soon found myself in front of the Schmutzer Primate Centre where one pays an additional fee of Rp.6,000 to enter. I climbed the stairs to the sky-walk over the gorilla enclosure from where the view is of lush vegetation. So much lush vegetation in fact, that it’s rather difficult to spot a gorilla. But at last I found one, a large silverback, totally uninterested in his surroundings, slowly plucking tiny leaves from a little stem and nibbling them.

And then, after descending from the sky-walk, I discovered another one. Not in the lush enclosure, but in a sorry concrete cage at the back. Equally indifferent to the world, staring without hope at the wall outside his cage and a tire-swing he can’t reach. Such loneliness, and such utter desolation. Gorillas, in fact all primates, are very social animals, living in groups, or troops, led by an alpha-male. Forcing them into a solitary existence must be stressful to say the least.

Apparently the gorillas were born in Howletts Zoo, England, and arrived in Ragunan in 2002, which made Ragunan the only zoo in Asia to house these animals. Originally there were four, all males, but one died.

Without any females, a social hierarchy was not established among the four. The males then started to fight and had to be separated. A severe blow for the well-intended enclosure. Visitors’ comments on the webpage generally voice regrets that the beautiful enclosure is not conducive to the viewing of the animals.

One comment argues: “…indeed a beautiful enclosure but not a successful one. Exhibits can be designed such that the animals prefer to frequent certain spots and so can be seen by visitors. Apparently that has not been done here.”

Similar remarks can be made about the orangutan enclosure. Of similar size and similarly dense vegetation as the one for the gorillas, it is nearly impossible to catch a glimpse of Indonesia’s beloved national treasure, the orangutan.

The enclosure does not boast a sky-walk, but instead has glassed openings in the outer wall for viewing—the windows through which I peeped remained, unfortunately, empty of orangutans. But for ‘visitor-satisfaction’ a mother and child could be viewed in a concrete sort cage! A less satisfying arrangement would be hard to conjure up! And as with the gorillas, mother-and-child evoke nothing but desolation and despair.

But there is more! Ragunan has hidden away a large number of orangutans, their number could even be close to 50! These animals live in even worse conditions than the orangutans and gorillas ‘on display’ in their annex to the enclosures. They are kept in small, miserable concrete cages in the sunless quarantine area south-west of the Schmutzer Centre. And even more incomprehensible, they do not have access to drinking water. Only when for the purpose of cleaning, the floors of the cages are sprayed, are the animals able to lap up some water. And this situation has been going on for years and years.

Have these apes been forgotten; are they terminally contagious; are they awaiting sunnier destinations? Difficult to say. But it certainly is an indication of a serious lack of attention, which under the current organisational arrangements is not surprising. Ragunan staff are civil servants and typically are liable to be moved to different assignments and functions during their career, and the zoo would not necessarily be a favourite assignment. These frequent changes of position and moving around also results in serious loss of knowledge and skills. Acquired specialist proficiencies, for instance in enclosure design and maintenance, are lost when the staff member is moved to an unrelated function in another division of the ministry. 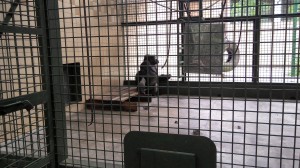 But the most serious obstacle to the efficient and effective management of Ragunan is most likely the staff’s widespread lack of interest in the zoo-specific working environment. That, unfortunately, is something that cannot be corrected with additional training or higher remuneration. Instead, a mega structural change will be needed to transform the Ragunan zoo and bring out its full potential.

First and foremost, Ragunan should be taken out of the government administration.

The most suitable organisational structure would be that of a non-profit organisation. This NPO could consist of three divisions: (1) animals, (2) house and garden (infrastructure) and (3) public relations. Each of these divisions would have a number of sections. The animals division could, for example, be grouped into large carnivores, primates, birds, reptiles and the like, with each group responsible for the well-being and health of the animals in their section.

Restructuring Ragunan will also ensure that specialist staff, with a specific interest in the zoo, its animals and its operations, can be hired, while opportunities for interns from relevant educational backgrounds could be created, too. That is, not only aspiring zoologists and veterinarians, but also those interested in public relations, marketing, botany, engineering design and others, could become trainee-interns.

The NPO-Ragunan would be funded from the entrance fees and donations from individuals and corporations. The public relations division would have an important role to play in securing a steady flow of funds. Additionally, the division would advise senior management on the price to be charged for entrance. The current Rp.4,500 will most likely need to be adjusted upwards to balance the cost of running a zoo the size of Ragunan and the educational and recreational needs of especially the lower income classes of the population.

The Ragunan zoo can be turned into an object of national pride. The current set-up does, unfortunately, not contribute to this aim.