Much of Indonesia’s seas are being “watched over” by friendly creatures whose underwater singing and dancing never cease to melt the human heart: some 30 species of cetaceans (whales and dolphins). North Bali’s whale watching industry is reported to generate about US$4.1 million per year, or about 40% of the incomes of local hotels in Lovina. But despite Indonesia’s millions of square-kilometres of territorial waters, cetacean conservation has hardly been on top of Indonesia’s agenda.

Even the Ministry of Marine Affairs and Fisheries (MMAF) has hardly paid attention to Indonesia’s whales and dolphins, until in October 2012, 48 pilot whales were found mysteriously stranded on Savu Island. The MMAF has since formed a national committee for the development of protocols regarding cetacean stranding, to be published this year gradually throughout Indonesia.

One of the cetologists working on this national committee is Dr. Putu Liza Mustika, who has been studying marine mammals since 2002. “A stranding event is a wake-up call that something is wrong with the way we manage our ocean. These stranded animals are the sentinels of our ocean, our port,” said Mustika. “If our sentinels are collapsing, that means our port is under attack.”

Unfortunately, finding funding for the protection of species today is harder than 20 years ago, because it’s not currently trendy. “There’s currently not much awareness on the link between the conservation of species and the other things it implies for the environment,” said Mustika. “In order to conserve an umbrella species, measures must be taken to conserve the ecosystem in which the species lives—for sea turtles this means the nesting sites, and for dolphins this means the nursery grounds where mothers rear their young. This may involve assigning marine protected areas.”

It also means managing and educating the users of the species, such as those involved in the fishery or tourism industries. It can mean developing policies for sustainable fishery, or preventing hazards to the species, such as vessel collision. “It’s like rowing past a couple islands on one stroke,” said Mustika, meaning that the conservation of marine megafauna achieves so many things other than the survival of the species itself. 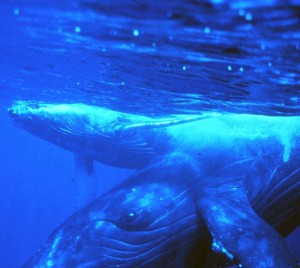 In a marine ecosystem, whales and dolphins are usually the top predators in the food chain. Theoretically, when the numbers of a predator species declines, it creates a “cascading effect” on the entire food pyramid.

“In Alaska, for instance, the sea otter population declines due to harvesting. Sea otters normally eat sea urchins, so now that there are less sea otters, the numbers of sea urchins grow. Sea urchins eat kelp, and their growing numbers are depleting the kelp forests [which supply underwater oxygen]” said Mustika. In regards to the whales and dolphins of Indonesia, their decline may mean the increase of other species that may hurt Indonesia’s fishery.

Traditionally, most Indonesians have a friendly relationship with whales and dolphins. Sometimes dolphins assist fishermen by leading catch into the net. Although, there are exceptions to this, such as when dolphins happen to be after the same kind of fish the fishermen want.

Most parts of Indonesia have a taboo against eating whale and dolphin meat. In Bali, whale meat’s spiritual terminology is “ulam agung” (sacred meat); the Balinese are encouraged not to kill whales, but allowed to eat ones that are stranded. Many scientists think this is not a good idea though, because stranded whales could be sick, injured, be contaminated with heavy metals, or carry parasites. Necropsies should be performed to determine the animal’s cause of death, but they are seldom done in Indonesia due to high costs, the scarcity of human resources, and complicated bureaucracy.

For instance, on this recent Good Friday (March 29), Mustika received news of a stranded whale in Pangandaran, West Java. Mustika lives in Bali and co-ordinates with her colleagues in Jakarta to organise a speedy necropsy before the carcass decays. But not only did the colleagues have difficulty borrowing a car on such short notice—even if transportation was out of the way, they would not be able to access the national park without permission papers from the authorities, who were off for the long weekend.

Indonesian whale hunters are found in the villages of Lamakera in Solor and Lamalera in Lembata, both remote islands east of Flores. In Lamalera, where the population is predominantly Roman Catholic, the sperm whale is locally known as koteklema (package from God) and priests hold a special mass to bless the whaling season in late April.

Traditional harpoonists row handmade boats and fatally pierce the 16 metre-long bull by hand before dragging it to shore. Lamaleran Catholics liken the catch to the sacrifice of Jesus Christ on the cross, offering his body for the redemption and unity of humankind, and new life. The whale’s body is then divided and distributed to the inhabitants of Lembata, usually bartered with rice and vegetables from other villages. This becomes a time where coastal Lamalerans and inland Lembatans come together for a reunion. The International Whaling Commission and most conservationist organisations such as WWF do not oppose aboriginal whaling like that practiced in Lamalera and Lamakera. However, Mustika said that she does not know whether Lamaleran whaling is sustainable, because Indonesia does not keep track of its whale populations, and whether they are “residents” or passing “migrants”. These numbers are important to determine the species’ Potential Biological Removal, or the acceptable number of individuals that can be harvested without compromising the population level.

Another factor to consider is the fact that whales take long to sexually mature and reproduce. Unlike fish that lay thousands of eggs in one go, sperm whale bulls sexually mature at about 18 years (or at the length of about 12 metres). The cows give birth to one calf at a time, with a gestation period of 14-16 months and births spaced more than four years at a time.

Additionally, whales and dolphins face various hazards on a regular basis. Oil & gas operations may cause spills and noise pollution. The navy uses sonar, which may disturb a cetacean’s health and navigation sense. Cetaceans can get injured when caught in fishing nets, and even when they are released sometimes the wounds get infected or otherwise compromise the animal’s wellbeing. Mining and industry may cause contamination by heavy metals and chemicals, or otherwise alter the cetaceans’ habitats.

Making Indonesia’s seas a safe place for our sentinels would thus require the collaboration of so many entities: the government, businesses, and civilians. In order to engage civilians, the national stranding network will hold a “first responder” training (like first aid but for stranded cetaceans) in Bali on May 1-2. Later this year, the network is also planning a workshop that trains veterinarians to perform necropsies on stranded cetaceans, and currently raising funds for this.

Setipe: An App for finding ‘The One’ in Indonesia