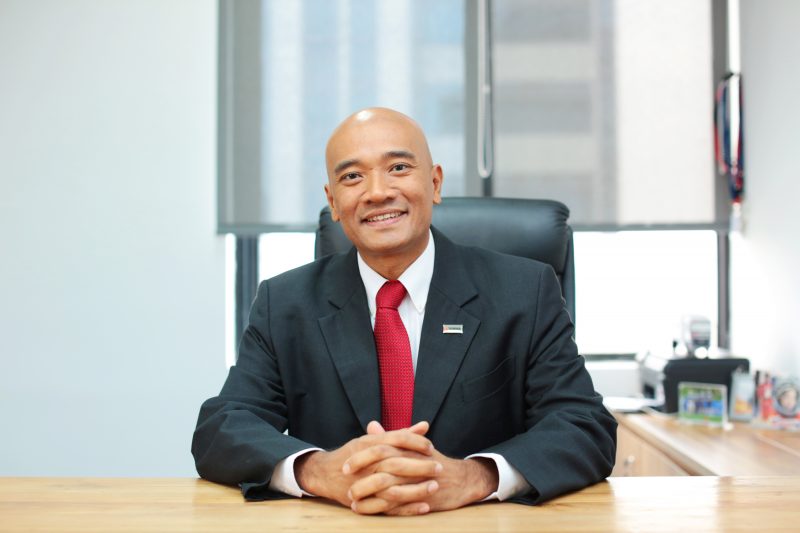 Asok is originally from Malaysia, although he has been an expat in Germany, the UK, Thailand and Japan before joining global logistics company DB Schenker in Singapore in 2006, where he headed up sales for the Asia Pacific region. The former marathon runner has been President Director of PT Schenker Petrolog Utama in Indonesia since April 2014, managing a staff of 506. He is known with admiration among his team for his meticulous attention to detail, as well as his humility and ability to lead.

What initially got you into the world of logistics?

I started my career out of university with the airlines – I had an interest in planes when I was young. I studied mechanical engineering but I never worked as an engineer! I started in the airline business on the passenger side, going into general management and the handling of passengers.

After eight years on the passenger side of the business, I then switched to cargo. But after four years working in the airline cargo side it got a bit monotonous because it was just port to port. But in the process of doing that, I got to understand more about the total end-to-end supply chain business and I started to understand elements of logistics which I never dealt with as an airline employee. So when an opportunity came along to join the third party logistics (3PL) side of the business, I took it because I thought, “OK, now I can really become a logistics professional.”

What opportunities did DB Schenker see in Indonesia that led to the establishment of the business here?

Schenker first came to Indonesia in 1974, and in 1999 we made a joint venture with the Petrolog Indah Group and became PT Schenker Petrolog Utama. I wasn’t around that time (or I was but I was in diapers!), but back in 1974 Indonesia was an active economy with a lot of potential. Schenker has been around for over 100 years and is always looking at emerging markets and economies in which to grow. At that time Indonesia must have been an interesting market to have a footprint on and grow in.

Can you tell us what the mutual benefits of the joint venture have been?

It’s always useful to have a local partner, simply because navigating the political landscape is important. Politics is politics, business is business, but somehow they get interconnected. Understanding the business culture is very helpful. Some very German mentalities cannot be applied here!

Our local partner has been very helpful to direct us in the right way and open doors for opportunities; it’s a very good partnership.

Can you give us a general overview of the work DB Schenker does in Indonesia?

We interestingly enough are involved in all aspects of the business except courier services. We are not B2C (Business to Consumer), we are B2B (Business to Business). Besides offering standard air freight import-export, bulk import-export, bulk ocean import-export, customs clearance services, delivery to warehouses, delivery to sites, warehousing, and distribution services, we also offer services in oil and gas projects, where we deal with very large equipment, drills, and rigs. We are also involved in coal and mining, however that industry has slowed down so we’re not currently seeing much movement there.

Recently, with Jokowi’s push on 35,000 gigawatts of power, a lot of power projects are ongoing and we are involved in some of them where we’ll be moving turbines and specialist equipment. We do route surveys, making an assessment and determining what needs to be done where, and then execute – sometimes this involves contracting people to build bridges!

We also do fairs and exhibitions – supporting the movements in and out of venues, setting up and dismantling displays, and bringing it back again. And we are involved in moving, storing and distributing for the healthcare industry, which is growing steadily in Indonesia, especially with the development of the BPJS system.

You offer expatriate move services. Are you seeing more expats leaving than coming?

Yes, we do! We offer international and domestic moves, which is our only B2C business and gives us a face to the consumer. Most of the people we move for compliment us for it.

We have seen that impact [of expats leaving Indonesia] very clearly. The numbers are not as good as we would like them to be.

Can you tell us more about your rail services?

Rail has not been a primary means of moving things in the past, partly because maybe services were not so reliable, tracks may not have been so well developed, but Kereta Api in the last two years are a lot more keen to grow the business. We are now moving regular products from Jakarta to Surabaya and back.

Getting customers on board at the beginning was tough; they weren’t sure if this was going to work – they all used trucks. But once we got them on board, it picked up immediately. Last month we moved 300 containers from Jakarta to Surabaya.

What has the feedback been like from your rail customers?

Customers have realized it really works. It’s much faster than trucks, it’s safe, there’s no damage to the products, it’s reliable, cost efficient, green, and there are typically no delays – the customers see that and are happy! Transit time from Jakarta-Surabaya is 18-20 hours, but with a truck you’re looking at 48-72 hours.

A recently launched service we’re offering is Less than Container Load (LCL), which means you don’t need to fill a container via rail anymore. Just give me one palette and I’ll move it for you at the cost of just that. This will make this rail service even more popular.

Rail takes trucks off the road, which means you can enjoy your drive. Those 300 containers we moved last month, they were all without a doubt previously moved by trucks congesting the roads.

You actively measure CO2 output and energy usage in every DB Schenker affiliate around the world. Can you share with us your findings from Indonesia and what you’re doing to reduce these here?

There’s no measure as such but we say we are the most green logistics company in the industry – we even have a special logo, the ‘ecophant’, which is a symbol of our green initiatives. And yes, we do measure locally. We have to report our electricity usage and CO2 emissions to our headquarters. We even look for airlines that have planes that are no older than six years old because they burn less fuel compared to the older ones. And as much as possible we use rail.

We build green warehouses, which are facilities that try to use natural light, natural ventilation, and natural water using rainwater for bathrooms. Our global target is to reduce carbon dioxide emissions by 20 percent by 2020: on land by 26 percent, in the air by 25 percent, on the oceans by 33 percent and stationary by 18 percent. To further reduce emissions, this year we will use more LED lamps, add charger timers for forklifts which will automatically cut off electricity when it’s fully charged, and train drivers in defensive driving, so that they drive more efficiently.

A significant share of your portfolio comes from the oil and gas industry. With the current challenges this particular industry is facing, is this having an effect on your business?

There’s no doubt that the industry is challenged. We’re seeing clients reduce their activity and a lot of expats have gone home. The entire industry is at a standstill – some people think it will pick up this year, others next year. It has impacted our business, but in turn we try to help them; we sit with them and look at ways to reduce their costs. The rail is one of the solutions we’ve given them.

What is the main challenge you face logistics-wise in Indonesia and how can this be improved?

Indonesia has a high logistics cost: 23 percent of GDP. This figure is improving, but the question is why so high?

There are multiple challenges, starting with the ports where the capacity is highly constrained and facilities need to be upgraded. The roads, bridges, and highways need to be improved too. Then there’s infrastructure in terms of warehousing, and of course traffic which effects logistics movement. The ability to have an efficient supply chain and distribution is sometimes hampered by 17,000 islands, road infrastructure, ports, airports and, of course, regulations.

The good news is it’s very clear the government is trying to fix this. Jokowi is one president that talks logistics; he knows the complexities of the challenges we face and things are all moving in the right direction.

DB Schenker is proud of its customer service at every level – what kind of training do your staff undergo in order to meet desired expectations?

We invest heavily in training because we believe in it. Three levels: management training, people development, and skills training. We try to schedule our people every year to go for training on a rolling basis. We want to step it up even more. At the end it’s investing in our people and our future.

What attributes do you believe a leader requires to run a business successfully in Indonesia?

You will find a lot of the basic management principals you learn at business school do not necessarily apply in Indonesia. I believe that the most successful style of leadership in Indonesia is to win the hearts and the minds; it’s not just about walking around with warning letters in your back pocket. You have to try to get them to believe in what you’re trying to achieve, to respect you as a leader, and people will follow. To be a successful leader, it’s about being able to build that status with the people – a mix of humility, giving clear direction and also showing people you know what you’re talking about whilst being fair.

The Perfect Brew: Primator in Indonesia

This Entrepreneur Shares His Profit with Bali Locals