Those who do head to Papua usually congregate in the Baliem Valley, in Papua Province’s Highlands, or in Papua Barat’s northern Raja Ampat. In the Baliem, trekking is popular, as is climbing: Trikora is a popular peak, as is Puncak Jaya. In Northern Raja Ampat, liveaboards are popular, and the dives on and around Kri are some of the finest in the world. For those who are looking for off the beaten track diving, Southern Raja Ampat is a frontier diving area—at a cost. For budget divers hoping to find something they can afford in Northern Raja Ampat, some land-based operators are more affordable than liveaboards. And for non-diving options, Mayalibit Bay features some of the finest bird watching around.

While most dive boats and operators are found in the north of the archipelago, the divers who manage to get to the south of the famed area will find some of the richest and most unspoiled marine environments in existence. South eastern Misool Island hosts a no-take zone the size of Singapore. The zone, enforced by locals since 2005, is replenishing once-depleted fish stocks. Only locals are allowed to fish, using hand-lines: boats are banned, as is shark-finning, turtle egg harvesting, and other destructive practices. Those who do reach the area will find some of the richest and most diverse reef systems in the world, with ever-increasing schools of reef and pelagic species.

Huge schools of jack fish, big-eyed, golden and giant trevally, red and midnight snappers, pickhandle, blackband and great barracudas, bumphead parrotfish and napoleon wrasse, including large adults that are rare in other dive areas of the archipelago, abound, so much so that dive guides don’t bother to point them out. Large grey reef sharks are found on every dive, with the largest adults down at 45 metres: in shallower waters, black tip and white tip sharks, and smaller grey reef sharks are common, as are wobbegongs. Epaulette sharks are common on night dives. But the area’s biggest attraction is manta rays – reef mantas and their much larger oceanic cousins – with the largest reaching wingspans of nine metres. Shoals of terrified anchovies and other schooling species provide the food for the zone, which at times resembles an overstocked aquarium. Bottlenosed dolphins are often seen from boats, but are rarely seen underwater. Seeing the aforementioned creatures is guaranteed: less-common animals that were seen in the two weeks the author was in the zone were shovelnosed rays, a family of blotched fantail rays (the largest with a three metre diameter), sargassum frogfish, and a three and a half metre scalloped hammerhead shark. Macro enthusiasts flock with their camera gear to the zone for the varieties of pygmy seahorse that hide on gorgonian fans. The finest dive sites include Magic Mountain, Four Kings, Rats Reef, Nudie Rock, Boo Windows, and Kalig Corner. Nearby islands host 3,000 year-old petro glyphs.

Misool Eco-Resort (http://www.misoolecoresort.com) is the only land-based operator, and its rangers, all locals, many of them ex-shark fishermen, patrol the zone. Liveaboards that visit the zone (as well as northern Raja Ampat, the Blue Water Mangroves, and other popular and rarely-visited areas) are the Amira (http://www.amira-indonesia.com), the Pindito (http://www.pindito.com/welcome.html), the Damai (http://www.dive-damai.com)and up to 18 others. Your dive operator will arrange your Surat Jalan (travel permit) and Raja Ampat diving permit for you as part of your package: the liveaboards and Misool Eco Resort arrange pickups for guests in Sorong, Papua Barat. Airlines flying to Sorong from Jakarta or Makassar are Sriwijaya, Express Air, and Lion.

These are all expensive options. Travellers on a budget who want to dive Raja Ampat have land-based options in the North to choose from. The Waiwo Resort (http://www.waiwodiveresort.com/), a 10-minute taxi ride from the Waisai dock where the once-daily public ferries from Sorong arrive, offers land-based diving for divers on a budget. Papua diving (http://www.papua-diving.com/) caters to a non-backpacking clientele but seems to have a soft heart for some independent travellers. Enquire in advance. 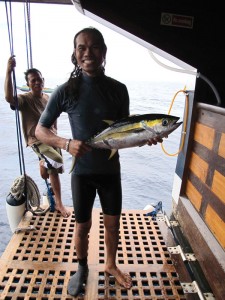 While the diving in northern Raja Ampat is already famed, other tourist opportunities are lesser known. Mayalibit bay divides Raja Ampat’s Waigyo Island in half: the bay is bordered by fjord-like cliffs and mountains, and is one of the most beautiful and untouched above-water sites in Raja Ampat. The bay is world-renowned for bird watching, with rare species seen across the bay. The famed birds of paradise are found here, namely the Wilson’s and red varieties (endemic to Waigyo and Batanta and found nowhere else on earth), as is the rare Bruijn’s brush turkey. Hornbills, parrots, and other birds are more common. The bay is large enough to seem like an inland sea: it hosts large juvenile populations of barracuda and other reef species and is also home to saltwater crocodiles, including one that lives at the mouth of the bay and is over six metres in length.

Getting to Mayalibit Bay and Northern Raja Ampat

Fly into Sorong and catch one of the once-daily public ferries to Waisai, the capital of Raja Ampat. From there, if you are diving, arrange for your land-based operator to pick you up at the dock. For Mayalibit bay, a taxi ride of one to one and a half hours takes you to Warsambin village, where you need to charter a boat. Homestays in villages are possible: your boat pilot can make recommendations. Those who wish for someone to organize their tour in advance can try Papua Expeditions (http://www.bird-watching-papua-adventure-travel.com). There are no hotels or restaurants on the bay. For those looking for a less adventurous non-diving adventure, Papua Diving (http://www.papua-diving.com) plans to organize kayaking / bird-watching trips in their area of Northern Raja Ampat.