Living in board shorts, riding from swimming hole to swimming hole and leaning into the next curve. This is freedom, this is touring Indonesia by Vespa.

The first part of my trip from Jakarta to Bali sharpened my appetite for the upcoming ride across Lombok, Sumbawa, Flores, Timor, Sumba, Nusa Penida and back to Jakarta. I reunited with my Vespa in Bali and headed straight for the ferry terminal. The next morning, I woke up in Lombok….

I spent a few days exploring the south coast. To the west of Kuta are the quiet beaches of Mawan and Mawi where you can swim between the fishing boats and talk with the locals over a green coconut. Nearby Semeti Beach has pyramid-shaped rocks pocketed with tidal pools fed by crashing waves and sea spray.

To the east of Kuta is the spectacular Tanjung Bongo, a rolling green peninsula with hidden beaches, coves and caves that will entice you to become a castaway for the day. To really get away from it all, meditate atop the vertigo-inducing cliffs at Tanjung Poki, where the distant views of Sumbawa will make you feel like you are at the end of the world. Return to civilisation at Pink Beach and enjoy the catch of the day.

Travelling north, I rode to Semaru on the cool slopes of Mount Rinjani. This makes a good base for hiking to waterfalls. The most popular waterfall is the two-tiered Sedang Gile. Following the same trail is Tiu Kelep, where the powerful upper falls arc dramatically over the lower falls. Further afield is Mangku Sakti with its sculpted rock formations and milky blue water.

During the dry season you can climb Mount Rinjani, a geological wonder and Indonesia’s second highest peak. The crater lake is a great place to cool off in the midday sun and your tired legs will appreciate a soak in the hot springs at sunset. If you are lucky, you will see troops of black ebony leaf monkeys along the way. This is an incredible two or three-day trip. It only takes an hour and a half by ferry to reach Sumbawa. Getting off the ferry, I wove through a herd of goats and headed south down the west coast. Check out the beautiful bay at Maluk and stay at Rantung Beach where you can watch families net fish every morning while having your morning coffee.  Cap off your west coast visit at Jelenga, the beach that has it all.  Here you can surf, snorkel, enjoy some of the world’s best sunsets, and spend the nights counting shooting stars. This place is paradise.

The road across the island eastward is perfect for motorcycle touring.  Devoid of traffic, it meanders along the north coast of Sumbawa and eventually climbs above the expansive Saleh Bay before continuing eastward to Bima and the ferry terminal at Sape. Let the road be your destination.

It’s a six-hour ferry ride from Sape to Flores. The town of Labuan Bajo makes a great base for exploring the Komodo Islands, home of the famous Komodo Dragons and some of the world’s best diving. Here you can dive with five-metre oceanic mantas that swim so close you will feel the water move when they pass.

The road out of Labuan Bajo will take you over mountains and into valleys with sweeping views along the way. Near Wae Belang are the symmetrical Spider Web rice terraces.  North of Ruteng, vast rice terraces cascade down the mountainsides like they do in Bali. Outside of Bajawa, visit Bena village with its megalithic stones, ancestral shrines and traditional houses.  Continuing eastward along the south coast you will pass Blue Stone Beach and the town of Ende, which is nestled between two extinct volcanoes.

I stopped at a gas kiosk where an eight-year-old boy filled up my tank using a hand pump. The entire family gathered around.  They advised me to go to Koka Beach, a small peninsula flanked by white sand and clear water.  I spent the night there in a ramshackle beach bungalow and woke in the morning to the sound of fishermen readying their boats.

From Koka it was a steep ride up the valley towards the crater lakes of Kelimutu. Along the way I saw a single waterfall drop for hundreds of metres in two tiers.  Stopping to take a picture I was greeted by a woman carrying a load of wood on her head.  She directed me through the rice terraces to a local swimming hole. That evening I spent the night in Moni and at sunrise I was riding to Kelimutu National Park with its different-coloured lakes. The lakes are the homes of those who have passed away.  One is for the virtuous, one for those who do evil and the third lake for the rest of us.  I pondered my fate over a cup of ginger-infused Kelimutu coffee made by an elderly ikat-clad woman squatting near the crater rim.

Over the next couple of days, I continued to explore eastern Flores, meeting fishermen and diving out of mangrove trees with local kids. I watched my final sunset submerged in a hot spring on a beach near Larantuka, then caught the lazy morning ferry to Kupang, a 12-hour journey.

Kupang, a thriving metropolis, makes a good temporary base for exploration.  About an hour out of town, descend into Kristal Cave with the local kids and swim in the shimmering waters by the light of your hand phone.  Another hour away, cool off at Oenesu waterfall where dragonflies land on your head and multicolored spiders, the size of your hand, are suspended in the bamboo groves. 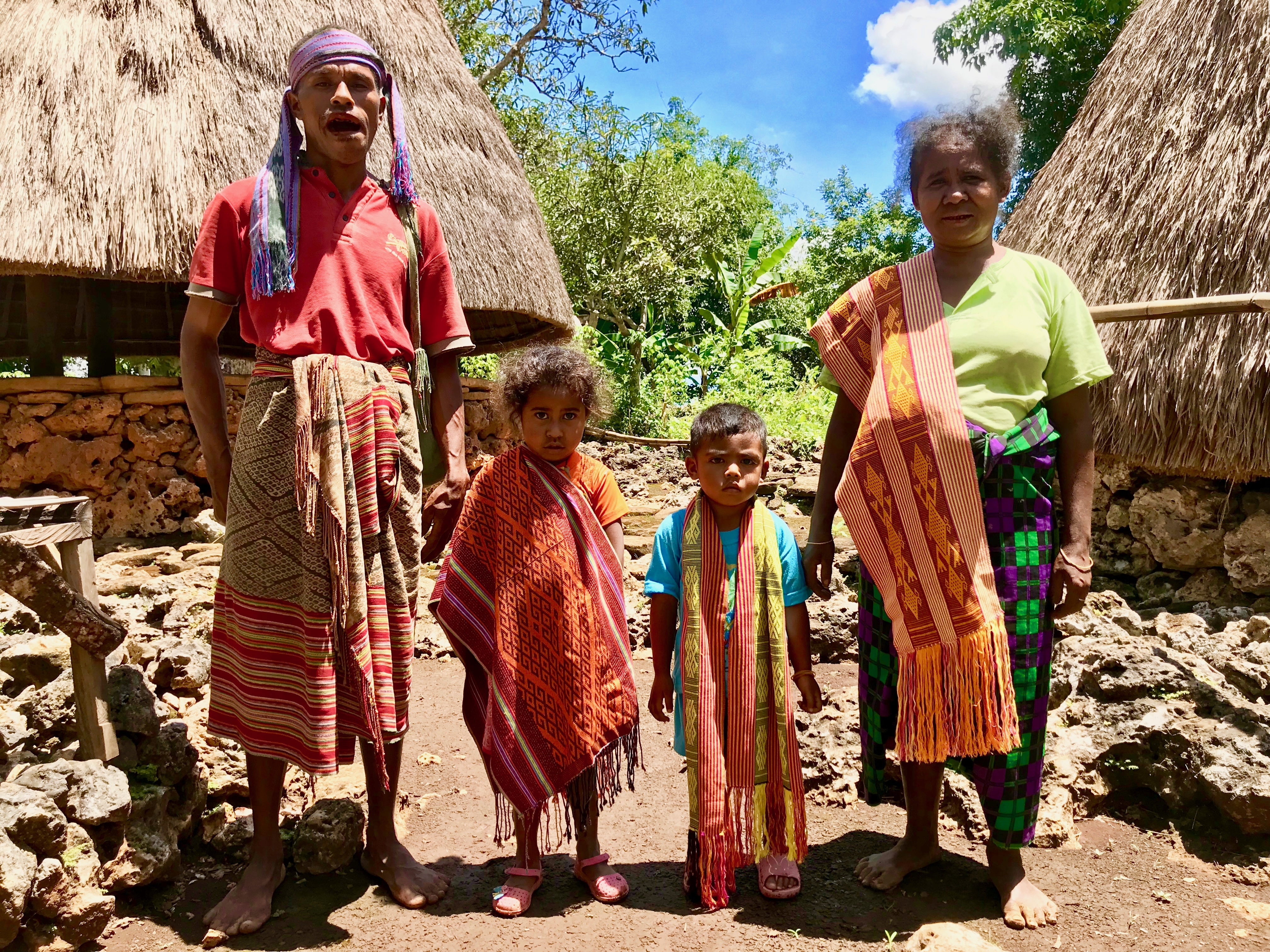 Leaving Kupang for the Central Highlands, spend a couple of hours hiking to Oesusu Falls, then buy snacks from the kids on the bridge over the Noel Mina river before visiting the fascinating beehive huts of the None tribe. If you are lucky, you may get an impromptu demonstration on how to chew betel nuts. For a transformational experience visit the Boti tribe, one of the last vestiges of humanity to resist modern culture. The Botis shun the use of electricity, weave their own ikat (woven goods) and live off the land.  They have a king and to this day still uphold their animist beliefs. I spent the night in the village under a sky full of stars and it left me with a genuine appreciation of their uncomplicated lifestyle.

Dropping down from the central highlands, head to Kolbano Beach where the white limestone sands mingle with the blue Indian Ocean making a dazzling shade of turquoise. From there it’s a day’s ride back to Kupang where you can catch the ferry to Sumba.

It took a full 28 hours to reach Sumba from Kupang as the ferry made a stop in Flores. I shared the rooftop with the crew, from where we watched an angry storm morph into a Michelangelo-inspired sunset.  Then a pod of whales swam off the port bow.  At night the crew played cards and, in the morning,, beams of light seemed to radiate from the depths of the Savu Sea. I felt like I was on my own private cruise ship.

Sumba had a surreal quality. East of Waingapu, in the clear waters off of Walakiri Beach I discovered a forest of pygmy mangrove trees. Nearby, families worked together netting fish and kids played on long spits of white sand wrapping around translucent blue tidal pools.  To the west, a storm inundated the city while we played in the sun.  It was pure magic. Crossing the island from east to west be sure to stop at the megalithic stones of Pasunga, where you will probably be greeted by throngs of children rolling tyres with sticks. The west coast, sometimes described as Sumba on steroids, has many places of cultural and natural beauty.  Visit the spectacular Weekuri Lagoon, a sparkling body of water created by seawater surging under the cliffs. Then take the dirt road heading along the coast to the traditional villages of Wanno Be’u and Ratenggaro where the houses are built with towering roofs so there is room for the ancestor spirits.

Ratenggaro sits on a beautiful estuary where a pristine river merges with the pounding Indian Ocean.  White sand bars divide the estuary from the sea creating a scene from your imagination. I entered the beach and was boxed in by a gang of betel nut-chewing men wielding swords. They demanded that I sign their book and pay an entrance fee. Desiring to keep all of my limbs, I did as they asked and then joined a group of kids that were hurling themselves off the rocks into the water below and having a great time. Overall, it was interesting to experience a slice of life in Ratenggaro, a place that operates in its own little universe.

BACK TO SUMBAWA, LOMBOK, BALI AND ON TO NUSA PENIDA

I left Sumba on the daily ferry to Sumbawa. People spat betel nut juice over the railing as I contemplated my success. I had looped around Nusa Tenggara, but I still had one island left to explore: Nusa Penida.

I zipped across Sumbawa and Lombok and arrived in Bali in a couple of days. From there I took the ferry to Nusa Penida and stayed in a rickety treehouse with a distant view of Bali and Mount Agung through the coconut trees.

By day I visited the majestic Kelingking Beach and the sun-bleached Baniff Cliffs. I snorkelled the secluded bay at Atun Beach and marvelled at the natural arch and sparkling lagoon at Broken Beach. From the cliffs above the infinity pool at Angel’s Billabong I watched oceanic mantas perform a ballet and at sunset I snorkelled with mantas in Crystal Bay. In the evenings I reflected on life with a cold beer from the porch of my treehouse. Life was good.

MARATHON BACK TO JAKARTA

From Nusa Penida it was two ferries and a five-day ride to Jakarta. A marathon. After a day of riding on the busy national road, I would arrive at the hotel with my face caked with road grime, looking more like a raccoon than a human. And this is exactly how I looked when I pulled up the driveway to my house in Jakarta.

The entire trip had taken me 61 days. I looked down at my odometer and realised I had clocked a little over 7,250 kilometres, about the same distance as riding from Key West, Florida to Juneau, Alaska. It had been an epic ride – and most of it at the speed of whim….

Pulau Kotok – In Conversation with Nature