Following the enormous success of the USS Liberty Shipwreck in Tulamben, the North of Bali now has a new shipwreck.

The “Boga” was sunk in September 2012 in front of the beach of Kubu (Karangasem Regency, not very far from Tulamben) with the idea of creating another point of aggregation for marine life and a new dive destination to attract tourists in an area of Bali still largely underdeveloped.

The Boga was a former 150-tonne cargo ship, almost 40 metres in length, and it now lies on a sandy bottom between 13 and 32 metres deep, perpendicular to the shore. After being purchased by the owners of Relax Bali Hotel (Kubu), the boat was donated to the Karangasem Regency to establish a new diver’s attraction and increase the cash flow in the area. 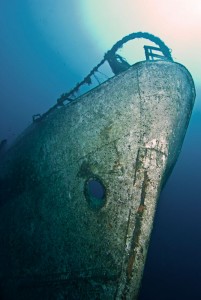 The ship is almost intact, and this is a huge difference for people who are used to diving in the USS Liberty site, as after so many years of being submerged, it has fragmented in to many pieces. The Gunung Agung eruption of the late ‘60s was also an important factor in this deterioration. Conversely, the Boga includes some interesting pieces, like the ship’s steering wheel, a VW car in the storage area, and the propeller, still intact at the maximum depth of about 33 metres. Some of these pieces are made of wood, so they will probably disappear quite soon, leaving only the metallic framework.

Shipwrecks are famous for being an “aggregation device” for marine life. At the moment, after almost three months underwater, the boat is still empty and quite clean: apart from some ‘implanted’ corals, only some green algae and sponges are starting to cover the ship’s surfaces. But fish are already interested in this new shelter: damselfish, fusiliers and surgeonfish are moving all around the wreck, in a kind of anticipation of what this wreck hopefully will become in the next few years. Two giant trevallies also accompanied me during the dive.

Corals, especially the hard ones, need time to grow up. Divers lucky enough to dive the Boga steadily over time in the next months or years will have the wonderful opportunity to witness an “ecological succession”, the change in the species structure over time. “Pioneer” species like algae and some soft corals will start colonizing the ship in the next few months. These species reproduce at a very high rate, grow quickly, have a short life span, and a low competitive ability. Depending on the conditions and on the environmental disturbance, quite slowly these species will be replaced by other species, like hard corals and other encrusting animals, needing more time to settle, but afterwards they will become very difficult to eradicate by competing organisms. A shipwreck covered by branched corals and soft colourful animals, surrounded by thousands of fish is every diver’s dream. It will take time (probably no less than 10-15 years), but for sure it’s worth the wait.

I have to say that some more environmentally friendly actions should have been taken before sinking the ship. Was it absolutely necessary to leave the tyres on the car? It would have taken 10 minutes to remove them; we don’t need more plastic waste in the ocean, and the tyres will deteriorate over the years, releasing some very bad chemical compounds like hydrocarbons and heavy metals. The same for the other tyres previously; probably used as boat fenders. I couldn’t find anyone willing to answer a couple of other questions like: “What happened to the oil and other pollutants present in the ship (and the car) engine? Did somebody recover them before sinking the ship?” These may seem like silly questions, but since this boat has been publicized as a new “environmental oasis”, I hope that these basic environmental issues were correctly addressed. It makes the difference between a very good idea with a bad beginning, and an effective ecological restoration project.

Anyways, the ship is in a nice and safe (if correctly approached) position: it’s worth a visit for both experienced and more skilled divers.