Fishermen in Indonesia have been catching sharks and rays for centuries, using traditional boats and artisanal tools. For some families, catching a big fish was a blessing that could guarantee their survival for a long time. Fishing methods have evolved however. Ignorance and greed have lead some of them to use destructive fishing methods, like dynamite and cyanide fishing that have destroyed many areas of the Indo-Pacific coral reefs. More equipped boats, often owned by foreigners or companies, capture high value species such as tuna and other deeper off-shore fish resources (like sharks), mainly for export markets.

During recent years we are assisting to a dramatic increase in the demand for shark fin and big ray gill rakers, originating mainly from Chinese-influenced countries. Shark fins are used for the preparation of the infamous shark fin soup, used in traditional Chinese banquets and celebrations. Recently, probably due to the dramatic decrease in shark populations, manta and other rakers are promoted as a panacea for a wide range of illnesses, from chickenpox and cancer, to blood diseases. Even though there is no medical evidence in traditional Chinese medicine about these curative effects, the volume of this market has been estimated to be around 80,000kg of gill rakers generating a money flow of around US$ 10 million a year. 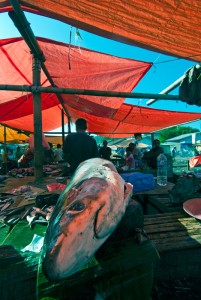 Often featured as terrible killers, sharks are a very important part of ocean ecosystems and the vast majority of shark species are absolutely harmless to humans. As apex predators, they are in charge of controlling their prey population thus balancing the fragile marine web chain. Their disappearance could lead to unpredictable, and for sure negative effects on the whole marine ecosystem.

The importance of these fish is not just ecological. They are wonderful and majestic animals, and many people worldwide spend a lot of money to dive or swim in waters where sharks are abundant. A study conducted in the Maldives has found their sharks to be worth $33,500 each to the government. No similar study has been conducted in Indonesia yet, although this country, with very few exceptions, is not recognized worldwide as a “Shark Destination”. Tourists aiming to see sharks normally go to the Maldives, Pulau (where in 2009 the world’s first shark sanctuary was created) or the Bahamas.

Due to their late sexual maturation and low fecundity rates, sharks are especially vulnerable to overfishing, and in many areas around Indonesia they are simply disappearing. One of the most exploited fishing areas is the sea between Nusa Penida (South of Bali) and Lombok, where every year thousands of thresher sharks (a magnificent animal that in some other parts of the world, like the Philippines, attract many tourists) are fished when they approach the coastal waters, just before giving birth to the young sharks. Fishing pregnant sharks is devastating for their population and will lead to local extinction pretty soon. A shocking fact is that Indonesia exports the largest volume of shark fin in the world, at 14%, followed by Spain and India with 9% each.

Shark meat is not very valuable in the market, so many fishing boats just practice the “finning” strategy, consisting of removing the fins from the animal while the body is generally discarded (often still alive) in the ocean. Estimates of the global value of the shark fin trade ranges at around US$1.2 billion per year. Shark fin is probably the most expensive seafood product worldwide, commonly sold at US$400 per kilogram. It is no wonder that some shark species have dropped in population by as much as 80% over the last 50 years. 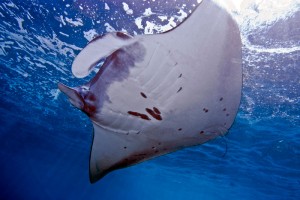 With this dramatic decrease in sharks, the fishing industry has found a way to replace the missing income and target another group of wonderful fish: the rays. Indonesia is still a place where it’s possible to see many of these animals: Nusa Penida, in the seas around Komodo, Kalimantan and Raja Ampat (Papua). Tens of boats leave every day from Sanur or Padangbai heading to the North of Nusa Penida with the specific purpose of diving or snorkelling with majestic manta rays. This guarantees a sensible income for many local diving operators and would be destroyed if the local population of manta are wiped out. A rough estimate of the income due to ray tourism is around US$ 100 million per year, much higher than the US$ 10 million (and not renewable) income due to manta ray fishing. A single manta is valued at around US$ 1 million if alive, compared to the maximum amount of US$ 500 if dead.

There are many economical and ecological reasons to protect these animals from disappearing. All hope is not lost: the first signs of a general audience awakening on the problem are appearing, even here in Indonesia. Just last month a shop selling shark fin in Jakarta’s Soekarno-Hatta airport has withdrawn these products from their shelves due to mass worldwide petitioning and action from local animal protection group, Jakarta Animal Aid. Hong Kong based flight company, Cathay Pacific, has banned shark fins from its cargo flights and in Singapore, some hotels and supermarkets have already banned shark fin soup from their menu. Public awareness advertisements on finning have reportedly reduced consumption by 25% in the last year. Even Taiwan has banned shark finning since 2011.

Let’s hope that the international pressure will be able to protect these animals before it will be too late.