Grace always knew that honouring the dead is central to Toraja culture. But on her second visit to Tana Toraja during the festive season, she learned surprising perspectives on what this really means.

Skeletons in rock caves decorated with tau-tau ancestral figurines; tongkonan traditional houses and corresponding rice barns, decorated with horns of bulls slaughtered in burial feasts; baby graves in tree trunks: it seems that the Toraja people live in constant reminder of how finite life on earth is, and spend this life preparing for the next.

Visiting with family and friends during Christmas time, we started our day at the buffalo market Pasar Bolu, which trades every six days. The slaughter of buffaloes is an essential part of the Toraja burial ceremony, as they are traditionally believed to be the vehicle, which escorts the departed into eternity. Ordinary black buffaloes cost 20-70 million rupiah. The most expensive breed is tedong saleko, the black-and-white mottled buffalo with yellow horns, blue eyes, and white legs, priced between 200 million to well over a billion rupiah.

A wealthy family with high social status may slaughter up to 28 buffaloes in a ceremony. That said, success among the Toraja community has also made these ceremonies competitive – it is not uncommon to find those that sacrifice more than 100 buffaloes. This does not include the pigs, which may cost between 3 to 7 million rupiah each. On top of that, the family has to pay for the elaborate tongkonan-shaped coffins, construction of the ceremonial grounds, and food for those who help out with or attend the funeral.

“Why go through all this trouble and financial tension for a dead person?” one may ask. According to local guide Nathan Salenna, “It is our expression of delivering the absolute best in paying the final respects to our parents, those who gave us life. As they settle in the afterlife, may they receive these offerings and arrive there happy.”

Christmas happens to be the time of the year when most diaspora Toraja return to the homeland to perform rituals. It is common for a funeral to celebrate someone who has passed away months or even years ago. In Tana Toraja, a burial ceremony is more than just a show of wealth and prestige – it is a time to reunite with relatives and friends not seen very often throughout the year. 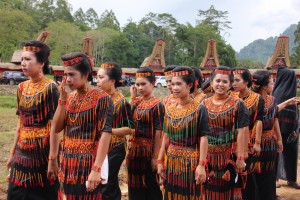 Since evangelisation in 1913, most Torajans today are Christians, but these burial traditions stem from their ancestral religion Aluk Todolo. Though polytheistic, Aluk Todolo also recognises a Supreme Creator called Puang Matua, and most Torajans do not appreciate the label “animism” on Aluk Todolo. Ancestral worship—central to the religion—draws on Chinese influences. Along with the Batak of North Sumatra and Dayak of Kalimantan, Toraja are descendants of the same branch of the ancient Chinese migrants from Yunnan.

“Islam didn’t penetrate Toraja successfully because it doesn’t allow us to continue our ancestral rituals and animal sacrifices, which includes pigs. That said, out of tolerance to our Muslim brothers and sisters in Toraja, we usually set aside one buffalo in a ceremony for halal slaughter,” said Nathan.

I attended a burial ceremony in Sangalla, and in the ceremonial grounds, a female ceremony leader was praying a Christian prayer in the Toraja language. The ceremonial house was ornately decorated in red and gold – somehow it felt a little bit like Chinese New Year, except that instead of having knots and lanterns, it had parang (Toraja daggers) and buffalo horns. Barefooted men clad in mostly black, young and not-so-young, took their places to carry the coffin. It was covered in fancy red and gold textiles, decoratively sheltered under a red buffalo-horn roof characteristic of traditional Torajan houses.

A parade leader led the chants, which the mourners sung along to in canon. The parade stopped often for the coffin bearers to do a little dance. At first I assumed they did this to rest from carrying such a heavy coffin, but it was always at the most awkward places, with icky mud squished between their toes. As we got near the rice fields by the side of the main road, it became clear that my assumption was wrong. 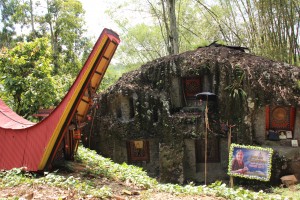 Within seconds, I was soaking wet in buffalo-poop water from the rice fields. There was chaos all around. The coffin bearers stomped harder in the puddles to wet the mourners. The mourners retaliated by jumping in the rice fields and splashing them with the same poop-water that got me seconds ago. Within a few blinks, buckets and bowls started appearing. Moving the coffin forward became a game of stop-and-go doused with generous water fights, chanting, and laughter.

“Oh, they got you too!” some old women started laughing at me. The fact that I wore a pink quick-dry sports shirt didn’t help—I ran out of black and ended up sporting a dead giveaway that I wasn’t local. “Watch out for your camera! Here they come again!”

I spent the remaining hours damp, cold, smelling like manure, and laughed at by my family and friends. But if there’s something I learned from a Toraja funeral, is to move on. As Nathan puts it, “After mourning comes joy. As we believe the departed has arrived happily in their eternal home, we honour them with a celebration of love and laughter. If you got splashed, that’s not for you to get upset with. They’re just cleansing you from their mourning spirits to make way for a new and happy beginning to carry on with this life. It is a shower of blessing.”

How to get there: Flights from most major cities to Makassar daily.

AviaStar flights twice a week from Makassar to Makale

or eight-hour drive from Makassar to Rantepao

Black attire and change of clothes