There isn’t a lot of green space left in Jakarta. Perhaps more than people realise, but still very little. What remains is worth preserving, not just because it looks nice and provides a few photo opportunities, but because it can become a vital resource in educating children. 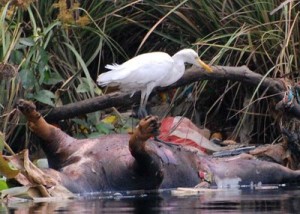 Muara Angke is home to a tiny sliver of mangrove swamp in north Jakarta. Hemmed in housing estates and row after row of shophouses, Muara Angke is what Jakarta used to look like before the developers were allowed to do their bit.

Sitting on the west bank of the Angke River the mangrove is perhaps the last area of its kind in our capital city. Unbelievably it is home to some 91 species of bird as well as monkeys, reptiles and amphibians. It is also filthy as the accumulated waste from upriver gathers in the creeks and the pools the animals call home.

It’s probably fair to say not many Jakartan residents are aware of the mangrove on their northern shore. But Muara Angke is famous in the worldwide bird watching community with twitchers, as the very keen among them are known, willing to travel long distances to catch a sight of the extremely rare Javan Coucal which can be found in only a couple of locations on the north coast of Java.

Jakarta Green Monster is an NGO that aims to increase kids’ awareness of what’s around them. By taking children along the walkway they point out the species who call this patch of land home. The water and trees are alive with the sounds of animals, especially first thing in the morning as the wildlife awakes from its slumbers and seeks out breakfast. Just a few metres away, Jakartans head for their workplaces blissfully unaware of the nature on their doorstep.

SMP Santa Laurensia is a fairly typical middle-class private school from Jakarta’s overspill. Most of the kids live in air-conditioned bubbles, blissfully unaware of the vitality almost in their own backyard. On a recent field trip to Muara Angke the students saw a Jakarta they never knew existed, saw a mess they knew only too well and learnt how we could prevent damaging our environment even further.

The day started with Hendra Aquan from JGM giving some background information to the children – information that was probably lost in the excitement of seeing monkeys up close. It was a steep learning curve for these city kids. Watching Discovery Channel is all well and good, but there is nothing like getting out and about, inhaling the smells, seeing the animals and understanding the filth.

Splitting into groups, each led by a JGM volunteer, the kids set about their appointed task. In the manner of school children everywhere, they moaned. It was too hot, nothing to see, boring. The complaints are universal, but gradually, one by one, they got wrapped up in the experience. Whether it was the enthusiasm and knowledge of the volunteers or whether it was the sheer fact they were out and about in nature they took to their binoculars and cameras and set about recording their day. 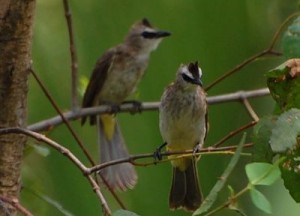 Seeing startled herons and egrets flee at the sound of 35 teenagers was a highlight for kids who rarely see birds in their natural surroundings. Rarely can a Giant Egret have attracted so much attention when flying on the horizon. Everything was new and the natural inclination of children everywhere to inquire fought and defeated the earlier doubts and complaints.

Amid the finger pointing and the yelps of delight was a solitary Australian gentleman with binoculars. He had travelled from Sydney just to spy a Javan Coucal and had little counted on the enthusiasm of dozens of kids to keep the birds well hidden.

After a well-earned lunch, they were taken in a dinghy along the Angke river to see for themselves how the trash so casually discarded upriver effects, not just the wildlife but also the fishermen who live opposite the mangrove. They ‘oohed’ and ‘aahed’ at the tall, elegant birds that lined the riverbank and low branches as they sought their lunch in the dirty waters.

Back on dry land there followed a couple of presentations, and then came the fun bit. Kids all around the world love to get dirty and these guys were no exception as they kicked off their shoes and jumped in the still swamp to pick up some of the collected trash. The area covered as a proportion of the whole site was minimal. The trash collected filled several bags but there was still more out there. Much more.

Cleaning other people’s rubbish is a thankless task and the key lies in education. Working with Jakarta Green Monster the students learnt a lot about the environment and how their actions can impact it. The kids from Santa Laurensia won’t change anything. Not by themselves. As one student said, ‘My brother always throws his rubbish on the floor. When I tell him not to because it looks ugly and damages the environment he says he doesn’t care, he doesn’t live there.’

But if more schools get involved in this type of activity, if Jakarta Green Monster is able to involve local communities then perhaps slowly but surely an environmental awareness may grow in Jakarta at a grassroots level and the word will spread.

Discovering Cirebon: A Haven of Handicrafts