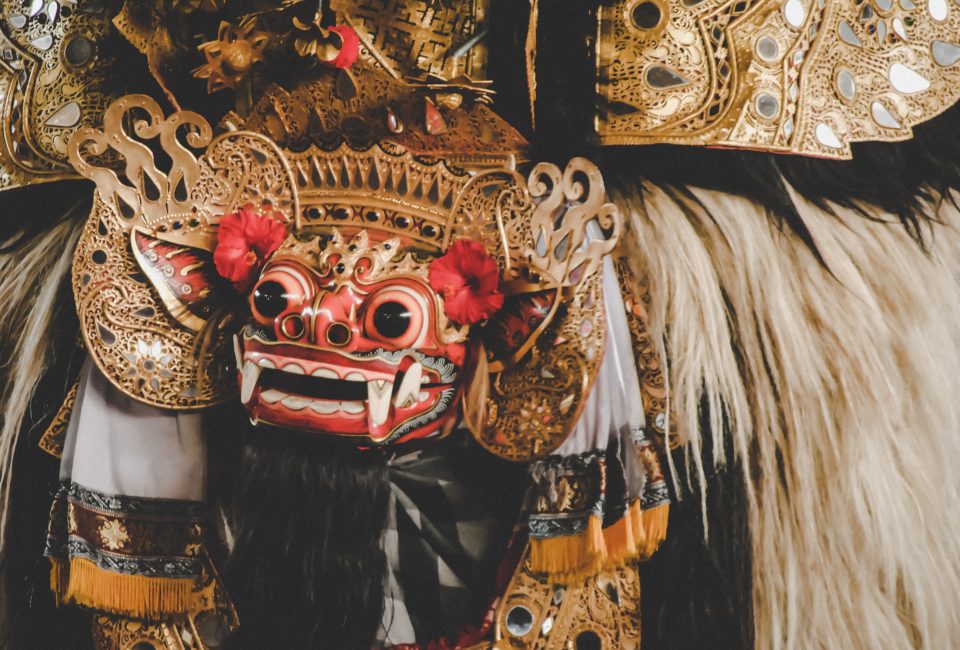 Bali as a world tourist destination is discussed ad infinitum – I’m sure you agree on this.

Thousands of tourists come every day to admire this island. What do you do to truly experience being in Bali?

Have you ever done or seen something that exists “only in Bali“? Are you the typical person who comes to Bali to party in Canggu or just come and relax on the beach and fill your Instagram feed? Well well, too bad.

Here in Indonesia, we have the slogan “dimana tanah dipijak, disitu langit dijunjung” – sort of when in Bali, do as the Balinese do. As many people know, Bali is rich in culture and its traditions are still very strong. Various traditional events are held literally dozens of times a year! You can party and relax on the beach elsewhere, but while you’re in Bali, why not do something that will last a lifetime?

Here, I’ve put together a few things that might be of interest to you to try and probably won’t be anywhere else but Bali! It can definitely be an inspiration for those of you who have never felt the authenticity of this Island of the Gods.

Tenganan is one of the oldest villages in Bali where you can visit and take a closer look into the old Balinese way of life. As one of the Bali Aga (native Balinese) villages on the island, Tenganan is well-preserved and predates the arrival of the Majapahit Kingdom to Bali.

The villagers are descendants of the pre-Majapahit Kingdom. Only those born in the village are acceptable to live there and are considered the Bali Aga. There are also strict rules about marriage: they must marry those who come from Tenganan Pegringsingan Village as well. Those who marry people from outside the village, that person must leave the village immediately.

Most of the villagers work as farmers but some of them are also working as craftsmen. The famous crafts from Tenganan Village are woven bamboo, carvings, and painting made from palm leaves. One of the village’s unique attractions is the ancient, double-weave ikat cloth produced here called geringsing, which is also the name of this village. This may be quite strange to some, but that’s how they keep their original offspring.

Another experience that you should watch at least once in this village is the Pandan War battle, which involves village boys coming of age and engaging in friendly but bloody matches. They arm themselves with bundles of thorny pandan leaves to be “swords”. The battles take place around the village temple anniversary, usually around June and July. Don’t forget to bring your gear because it’s going to be epic! 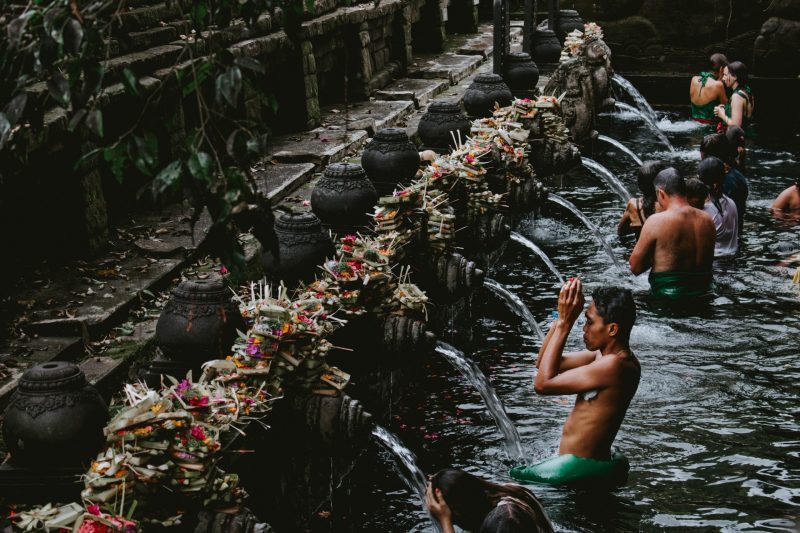 Do melukat at least once!

Melukat is a self-purification ritual. Balinese Hindus believe in this way, that everything bad that is not visible inside you will be destroyed along with the flow of water that washes your body. Melukat aims to cleanse and purify the human body and soul in order to prevent havoc, bad luck, and sickness.

Each participant will be given Canang, offerings that usually contain flowers in a woven coconut leaf with incense. The ritual will begin with the priest casting a spell on God and will continue by immersing our body into the pond. Participants have to take some sips of the water as a symbol of washing away all the bad elements that reside in our body and mind, while at the same time inviting positivity and good things. At the end of the ritual, after you clean yourself in a pool, you will be sprinkled with holy water and asked to drink water three times. 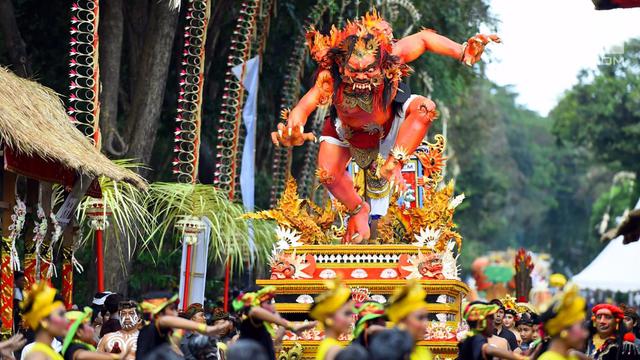 Being in the festivities of the ogoh-ogoh festival

Ogoh-ogoh is nearly identical to Nyepi Day in Bali. For this one, you must be in Bali in early March. This festival is always held on Pengerupukan Day, which is the day before Nyepi or silent day.

Ogoh-ogoh is a huge puppet which is a symbol of negative elements, bad qualities, and evil that surrounds human life. These puppets are made from a bamboo frame covered with paper, but over time most of today’s ogoh-ogoh are made with styrofoam as the material produces a smoother, three-dimensional shape. The work also takes quite a long time and the consistency of course, to make one ogoh-ogoh takes weeks depending on the level of complexity. 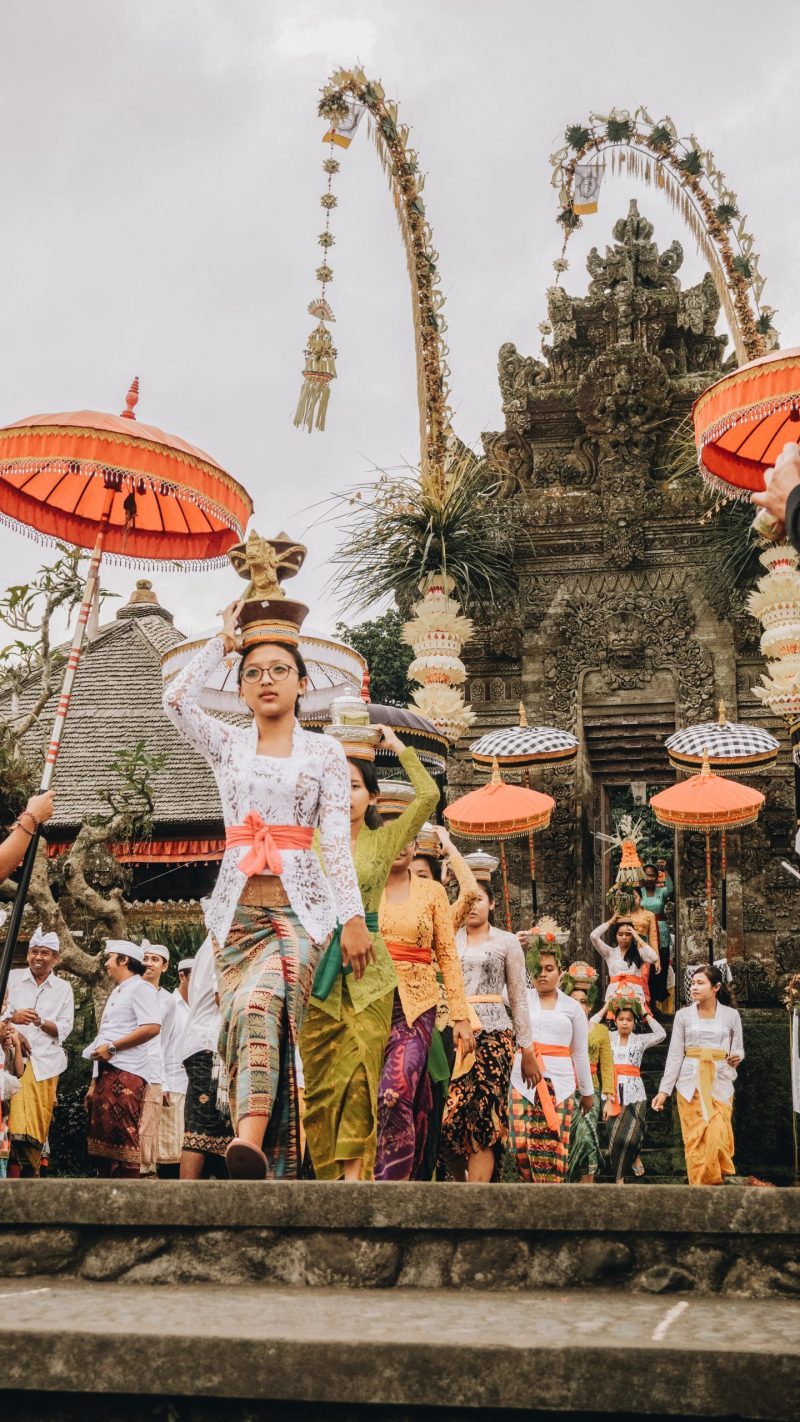 Surely, you have often heard another nickname for Bali which is “island of a thousand temples”, right? Well, this is not without reason; in every corner and place, Bali has many temples which also hold traditional ceremonies which are very exciting to participate in.

In Bali, there’s literally no single day without a ceremony. It’s an obligation to promote balanced relations among humans, Gods, and nature. Traditional Balinese ceremonies have unique elements that might amaze you, starting from the equipment, the musical accompaniment, and up to the execution which is carried out beautifully. It would be a shame if you go to Bali without having attended or witnessed a local traditional ceremony. Keep in mind that some ceremonies are very sacred to Balinese Hindus so not all of these ceremonies can be followed arbitrarily. Don’t worry, there are still many ceremonies that are free for you to follow and capture, for example:

Melasti is the biggest of the Bali Purification Rituals involving the most Balinese Hindu people. They carry all the God symbols to the sea as well as other holy water resources. The meaning of Melasti ceremony is a self-cleaning process of humans as well as the entire universe with the sacred Hindu rituals. The purpose of the Melasti ceremony is to purify Bhuana Alit (small world – human body) as well as Bhuana Agung (this universe) from bad influences, bad deeds, and bad thoughts.

All of the Balinese people will wear the Balinese traditional costume such as a kebaya and kamen for women and the baju safari, kamen and udeng for men, with white colour dominant. The Balinese traditional instrument – gamelan – is sounded during the parade procession with some priests leading among the people. After arriving at the beach, all god symbols are purified based on local rituals. Afterwards, They are carried back to the temple and kept sacred. Each Balinese Hindu person will go to the temple for worshipping to get prosperity and peace for the entire world.

In Bali, there are over 4,500 temples where ceremonies take place almost every day of the year and Odalan is the celebration of each temple’s anniversary. Temple festivals are held on the anniversary of when the temple was consecrated and usually on a new or full moon.

An Odalan or temple ceremony usually lasts for three days, but larger ones, which occur every five, 10, 30 or 100 years, can last for 11 days or longer. The gist of what is happening here is that the Balinese are honouring the deities that rule over the temple by giving them myriad offerings, performances of vocal music, dance, and gamelan music.

Lawar is an original traditional food from Bali,  a mixture or combination of meat, vegetables, and coconuts, which is also rich in herbs and spices from Balinese taste. Sometimes, it can also contain fresh animal blood in it, but feel free to ask for a plate of lawar putih if you don’t want any blood on your plate. Lawar has a delicious and savoury taste, which will make anyone addicted if you try it.

Lawar is a typical Balinese food that is often made during ceremonial activities, both traditional and religious. In Bali, lawar is not only consumed, it is also used as offerings in every religious ceremony. Lawar is offered as a form of gratitude for the abundance of natural wealth that God has given. This is because lawar has complete components from both plants and animals as a form of natural wealth itself.

Eating lawar will not be complete without sate lilit! They are both usually side by side on a menu. Sate lilit is a popular dish from the island of Bali. The word “lilit” roughly means “wrap around”, so the meat is usually wrapped around the skewers. Traditionally, lemongrass stalks are used as skewers instead of bamboo skewers. Well I personally think using lemongrass stalk as skewers makes sate lilit taste even better, the aromatic lemongrass means that when you grill it, it imparts that great aroma to the meat. To be more practical, most skewers of sate lilit use bamboo because it is easier to get and the price is affordable

The choice of meat is also really flexible. People use minced chicken, fish, pork, beef, duck, etc to make sate lilit. Various spices are then added to the ground meat to add flavour; spices included, but not limited to, grated coconut, onion, garlic, chillies, ginger, turmeric, and lemongrass. After the meat and spices are thoroughly mixed together, the meat mixture is then wrapped around a bamboo stick, usually broad in size, so that the meat won’t easily break apart when cooked. The combination of various flavours creates a delicious sensation on your tongue with every bite that you take! If you are in Bali, you have to try this popular Balinese dish at least once, and you’ll find out for yourself why it is so popular on the island!

Those are some of the things you can do while in Bali, are there any on your bucket list?