Founded in 1619 on the smouldering remains of Jacatra, Batavia was meant to function as a depot for the produce destined for Holland and as the administrative centre of the Dutch East India Company (VOC).

For the purpose of protecting its monopoly from independent citizen-traders, the VOC discouraged the settlement of private persons—freemen—by making Batavia unattractive to anyone not employed by the Company. This policy had a distorting effect on demographics. Around 1750 the total population of Batavia was 30,000 – 50,000 people, of whom 2,400 were VOC-related expats and 160 (an internationally mixed group of) freemen. The remainder consisted of Chinese, indigenous groups and slaves.

According to Governor-General Jacob Mossel the freemen were a coarse and uncivilised lot. They generally were destitute. A previous Governor General, Johan Maetsuycker, had once invited a nephew to come to Batavia as a freeman. The young man replied that he wouldn’t dream of becoming a slave on Java.

By contrast those in the VOC fold did live comfortably. François Valentijn, minister of the Gospel, twice called to the Indies and a keen observer of all and everything around him, presents in his eight-volume encyclopaedia Oud en Nieuw Oost-Indien (Old and New East Indies) a wealth of information on the goings-on in Batavia, and wondered how these poorly paid officers could live in such copious abundance.

According to Valentijn, life was expensive, from renting a house on one of the nicer canals or streets, to imports such as French wine, Dutch beer, ham, butter, cheeses, smoked salmon, herring, olives and smoked meat, prices were high and 3,000 guilders a month didn’t allow for many luxuries. The Governor-General had a monthly salary of 1,200 guilders, to which was added another 400 guilders living allowance. His daily needs of beer, wines, bacon, oil, butter, candles and any other goods, if available, were supplied from the storehouse of the Company, together with an attractive mansion. A senior merchant earned 120 guilders, a merchant 60 guilders and an assistant 24 guilders per month. All received additional income in kind. 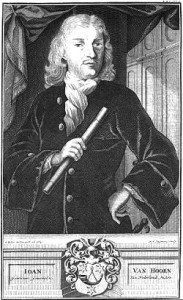 A Governor-General would thus have earned some 14,000 guilders per year. But after having stayed in that position for five years, the accumulated capital of Joan van Hoorn (1704-1709) upon repatriation was estimated at 10 million guilders. The Governor of the Moluccas, according to Valentijn, saved 50,000 guilders per year on a yearly salary of less than 2,000 guilders. And the assistant Lodewijck de Roy, who had earned 18 guilders a month, left a sum of 136,000 guilders in gold coins to his wife.

Governor-General van Hoorn, who retired (was forced to retire, actually) with a capital of 10m guilders, had also spent a fortune on his third wedding in November 1706. It is Valentijn again who recounts the event. The bridal procession comprised the Batavia garrison, the members of the Council of the Indies, merchants, other prominent VOC officers, and their consorts. After the church service, the 120 wedding guests were feted at the van Hoorn residence from 11 in the morning till midnight, while in the early evening fireworks illuminated the sky over the town and added to the merriment.

A few decades later Governor-General Jacob Mossel outdid it all. He, too, accumulated a large fortune and, on instructions from the Board in Amsterdam (Heren XVII), he instigated rather ineffective measures against corruption. Moreover, to counter excessive splendour, he was told to issue the “Reglement ter beteugeling van Pracht en Praal” (Regulations to Curb Pomp and Circumstance) which prescribed in detail what conspicuous luxury and magnificence was permitted to VOC officers—from, for instance, the number of buttonholes on a gentleman’s coat, to the size and adornments of the parasols ladies of different ranks were allowed to use—typically carried by a slave following madam. At a certain moment it was even decreed that ladies of mixed blood were not allowed this parasol service, which led to a boycott of church attendance and was quickly revoked.

But what applied to the others did not go for the GG himself. And when he died of a wasting disease in 1761, his funeral procession was a work of art in itself.

Valentijn also records the various methods used for self-enrichment. First and foremost was the trading done privately by officers of the company, in competition with the VOC (the employer) and in violation of their strict orders. And the irony of it all was that this contraband was transported on the VOC’s own ships. In a letter to the Governor-General, the Heren XVII complained that ships were so overloaded with these goods that one wonders how they ever made it across the seas.

Another method was through faulty bookkeeping. In the sugar industry, for instance, the results from pressing were underreported, and the losses in the warehouses were overstated. Weights were also tampered with, a standard pikol was about 125 pounds; the buyers for the VOC, however, increased the weight to 140 and 160 pounds while paying for the standard pikol only. Furthermore, the sales price of Company goods was under recorded, and those in positions of power did not only sell jobs to prospective VOC officers, but were also given lavish presents at New Year by Chinese traders and licensed tax collectors. The licenses were of course also sold and some had a price tag of 50,000 guilders.

The VOC was blamed for this situation. Because of the low salaries, it was said, hadn’t Jan Pieterszoon Coen himself complained about the low pay! And thus the fringe benefits were considered an allowable necessity. It seems that little has changed since those bad bygone days.