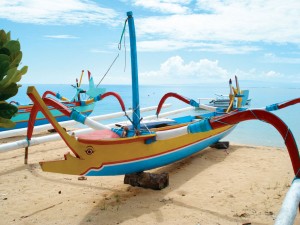 Bali’s tourism industry is currently enjoying a strong resurgence as large numbers of foreign tourists are once again visiting Indonesia’s best-known holiday destination following a number of poor years in the wake of the devastating Kuta bombing back in October 2002. The beaches in the south of the island are again proving to be a strong magnet to the younger crowd who seek sun, sand and a variety of hedonistic pleasures, while the older and generally better-heeled tourists are heading for the cooler climes of central Bali where they are able to savour the island’s rich cultural traditions in places such as Ubud.

However, neither of these locations will appeal to those wanting to get away from the hustle and bustle of everyday life. But there is no reason to despair. Because one of Bali’s little known secrets will reveal itself to those willing to make the effort to get there: the magnificent northeast coast. No trip to the northeast coast of Bali would be complete without a visit to Tulamben. Although visitors may not be particularly impressed by its rather nondescript one-kilometre long pebble beach, there is actually far more to the place than meets the eye.

For close to the shore, hidden from sight, lies the wreck of an American Liberty Class merchant ship. Torpedoed in the Lombok Strait by the Japanese during the Second World War, Tulamben became the ship’s final resting place as she ran aground while being towed to the Balinese port of Singaraja. The vessel remained on the beach until it was pushed away from the shore and into deeper water by lava flows as a result of the eruption of Gunung Agung in 1963.

Today the 120 metre-long wreck is only about 30 metres offshore, making it easily accessible for divers and snorkelers alike. It lies in depths from nine to 30 metres, and the highest point of the stern is only about 4 metres below the surface. And although broken up, many of the ship’s original features – such as the guns, boilers and the anchor chain – are still clearly identifiable to divers. But best of all, being in extremely plankton-rich waters, the wreck has become a haven for a wonderful array of marine life. Schools of fusiliers and surgeonfish and over 400 other species of tropical fish have made it their home.

And even away from the wreck, and only metres from the shore, the snorkelling is still superb as a shallow coral reef stretches along the bay. Expect to see many species of tropical fish including brightly coloured butterflyfish, as well as angelfish and probably the most readily recognizable of all coral reef fishes, the wonderfully shaped moorish idol fish. There are even huge triggerfish. But be careful: this highly territorial fish might bite if you get too close!

The coastal tranquility of Amed From Tulamben, Amed is only a short half-an-hour drive away. Follow the road to the small town of Culik, and then take the signposted left-hand turn. Although this stretch of coastal road is often referred to as Amed by many tourists, it should be noted that Amed is actually just one of a number of small fishing hamlets in the vicinity.

Noticeably poorer than the rest of Bali, do not be surprised to see local villagers bathing by the side of the road as freshwater is a rare commodity here given the region’s very dry climate. Besides salt panning and subsistence farming, there are few job opportunities, and many locals earn a livelihood from fishing. The many brightly painted jukung (small traditional Balinese fishing boat) make for a picture postcard setting, especially at sunrise when they return to shore after a long night’s fishing.

About eleven kilometres along the road from Culik is Lipah Bay, a wonderfully remote location. Close to the shore lies the wreck of a Japanese steel freighter in 6-12 metres of water. To find it, just go down the steps that are right outside the Eka Purnama cottages to the black stone beach. Although tiny in comparison to the Liberty wreck, this small wreck is nonetheless ideal for snorkelling. Being in such shallow water, the coral encrusted wreck is a mini ecosystem in itself, and snorkelling here is like being in a large aquarium. In this bay are also some of the most beautiful coral fields in Bali. The huge sea fans are a sight to behold.

The reason so few tourists make it to Bali’s northeast coast is its inaccessibility. Shuttle buses have long since stopped bringing tourists here, and given that it is a good two-and-a-half to three-hour drive from the south of Bali, a taxi ride would cost a small fortune. So if you really want to explore this region of Bali, then there is little option but to hire a car or go on a group tour. The best place to find a reputable car rental firm is at Bali’s Ngurah Rai international airport.

Much cheaper car rental options are available at places like Kuta and Ubud although the roadworthiness of some of the cars may be questionable, and it may be unclear whether the car is actually insured or not! Also remember that to hire a car in Bali you’ll have to have either an international driver’s license or an Indonesian driving license. Once on the road, exercise extreme caution when driving in Bali – oncoming vehicles have the infuriating tendency to drive on your side of the road! The coastal roads in Amed are also very twisty. So don’t be tempted to drink and drive or you may well end up in the sea!

Given the remoteness of the northeast coast, some fresh food items have to be brought in from the nearest town, Amlapura. This may go some way to explaining why the food in this region of Bali is often very poor – and in some cases even inedible – as well as being very expensive by Indonesian standards. No chance of finding any wonderful Padang restaurants here! Be very careful then when choosing a place to eat. Some of the restaurants at the busier hotels are probably the best bet.

In regard to accommodation, there is plenty of choice, although many of the older hotels and cottages are rather rundown. However, like the food, the accommodation here is much more expensive in comparison to the rest of Bali. Check out possible places to stay by searching the excellent Bali tourism info site www.Balitravelforum.com before you come.

You also have to bear in mind that Amed is as dead as a dodo at night. There is very little chance of any entertainment at all, except perhaps a low-key Balinese dance at one of the local restaurants. But what the heck: this is a small price to pay. After all, you’ve come here to get away from it, haven’t you?