As we head clear of Candi Kuning the traffic noticeably thins. We wind our way higher up into the mountains, looking down on the twin lakes of Buyan and Tambilang with numerous lay-bys to soak in the view before descending through Munduk, finally meeting the north coast road.

Pemuteran on Bali’s under populated north coast is a one street village sandwiched between the hills and the sea.

Famous equally for its diving and its inaccessibility, it has escaped the numbers that have flooded the south coast retaining its village charm. The relatively low number of visitors has perhaps contributed to a more ‘genuine’ Balinese experience for visitors jaded by Kuta’s incessant hard sell and “Hello mister, transport mister?” Both can be jarring on the nerves, as if avoiding the pot holes isn’t enough to keep minds focused.

As I walked down the street after checking in I soon lost count of the number of times I was greeted by smiling locals. And not once did anyone say, “Hello mister”. Children smiled their toothy white smiles, waving as I walked past, even older people offered a hint of a smile. And nope, nobody tried to sell me anything either.

The laid back pace of the village is not matched by the road that runs through it. Connecting the port town of Gilimanuk with the north coast, buses and lorries tear through the village at a frightening speed, catching the unwary in their slipstream.

Ignoring the traffic, the main street offers a few dive centres, a few salons, the odd restaurant and mini mart. That’s it. None of the shopping malls, bars and surf outlets that attract so many visitors to the island. 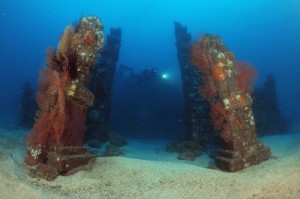 This is a place to pamper one’s self. Perhaps indulge in a bit of trekking and bird watching in the nearby West Bali National Park, home to the protected and incredibly rare Bali Starling, do some diving then relax with a massage or a spa. A healthy pit stop for those seeking a bit more from their Bali experience than the six temples and a volcano bus tour, the surf and beer of Kuta or the beautiful people who fill Seminyak’s cafés.

The beach itself has the same vibe as the rest of the village. Unostentatious and yes, laid back. Too often a beach experience can be ruined by hard sell that makes Wall Street look like a quiet afternoon watching cricket. The black sandy beach at Pemeturan is not like that. Nestled along a pretty 2 km bay, the narrow strip of sand is neatly divided in two. The western end accommodates the resorts and the dive operations; the eastern end is where the villagers live with their fishing boats. But this is no division between big business and the villager. In fact, the exact opposite. Pemuteran is a shining example of how, by involving the local community, local people can feel the benefits of tourism as well as carrying on their traditional way of life without becoming a human zoo for rubbernecking visitors.

Numerous environmental initiatives have been set up between the dive operators and the villagers that offer visitors a memorable experience and local people vital cash flow. 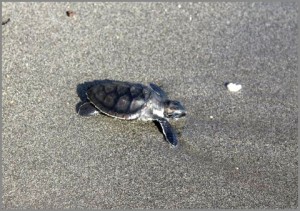 Proyek Penyu is one such initiative. Every year it is estimated some 30,000 turtles are caught in the waters around Bali. Most are eaten; some are used in various ceremonies.

One day, about 20 years ago, Australian expat Chris Brown saw a fisherman had caught a turtle. Rather than see the animal turned into sate he bought the turtle and wondered what to do next. A week later he bought another one. Then he started buying the eggs.

Over time the villagers came to realize that there was more money to be made by handing turtles over to that white guy who had moved into the village rather than sell them to restaurants. The communities themselves, understanding what an asset the preservation of these animals has become to their livelihood, have made it compulsory for fishermen who accidently catch one to take it straight to Proyek Penyu where they will receive a small reward.

Baby turtles are released in the morning while the rest are fed in the early evening, usually about 5 pm. Visitors are invited to make donations which have a double purpose; apart from raising funds to keep the project going, it shows the local community that the turtles and their future are valued beyond the confines of the village.

Getting There
On a good day it takes about three and a half hours from Bali’s Ngurah Rai International Airport. With public transport difficult to track down a pre-paid taxi from the airport is the best option though not cheap at 675,000 IDR.

Things to Do
Dive! Among the operators are Reef Seen, Easy Divers, Sea Rovers Dive Centre and Diving Centres Werner Lau. Apart from that, laze around, watch coconuts fall from the trees and learn about turtles.

Eating & Drinking
Bit of a wasteland to be honest. Little beyond hotels, warungs and a handful of stand alone restaurants.

Places to Stay
Plenty of places in all price ranges stretched out along the strip. As a rule of thumb the more expensive places will be on the beach side of the road. Prices rise during peak seasons.

Getting Around
Walk but be careful of the traffic!