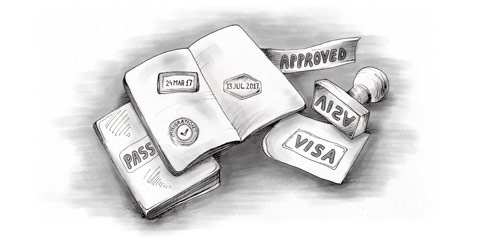 Procedural differences between obtaining a KITAP for investors, expatriates working as director or commissioner, and spouses of mixed marriages in Indonesia.

The Indonesian government is currently encouraging foreign investments in Indonesia to support the country’s development. The government has issued two new regulations, Presidential Regulation No. 20 of 2018 (Perpres 20/2018) on Foreign Workers and the Chairman of BKPM Regulation No. 13 of 2017 on Guidelines and Procedures for Licensing and Investment Facilities (BKPM 13/2017).

Significant in both new regulations is how the government wants to simplify the process of recruiting foreign workers in Indonesia and clarify the filing of KITAP (Permanent Stay Permit Card) for foreign investors.

First of all, what is a Permanent Stay Permit (Izin Tinggal Tetap/ITAP)? As can be seen from its name, ITAP is an immigration permit for foreigners to stay permanently in Indonesia and it is formalised by an immigration stamp in the holder’s passport. After the ITAP has been granted, the immigration office will issue a Permanent Stay Permit Card (KITAP). The KITAP is valid for five years with two years of multiple re-entry permits and it can be extended.

However, the government regulates KITAP more specifically in Perpres No. 20/2018 and BKPM 13/2017. For more details, we will explain the differences between the KITAP for Investor, KITAP for Foreign Worker, and the KITAP for the spouse of an Indonesian citizen in Indonesia:

KITAP for Investors
According to Article 10 Paragraph 1 Letter a, Perpres No. 20/2018, a company that wants to hire a foreign worker does not need an RPTKA if the foreign worker is a shareholder and holding a position as director or commissioner of that organisation. The provision is in line with Article 90 Letter d, BKPM 13/2017, which states that BKPM provides a recommendation to convert the status of a Visiting Stay Permit (Izin Tinggal Kunjungan) into a Limited Stay Permit Card (KITAS /Kartu Izin Tinggal Terbatas) and Article 90 Letter e, BKPM 13/2017, which states that BPKM provides a recommendation to convert the status of KITAS into a KITAP for investors.

Furthermore, here are the requirements and procedures for submitting a recommendation to transfer KITAS status to KITAP at BKPM:
1. The original form of the application signed by the management of the company (the guarantor) or its attorney with the stamp and seal of the company;
2. Original Letter of Attorney, if the application is not made directly by the management of the company. A company employee of the company can be authorised and show a company ID.
3. Identity Recording Company Leader Guarantor:
a. Foreigner: Passport and/or IMTA
b. Indonesian Citizen: KTP and NPWP
4. KITAS records for the last three years, NPWP and passport of the foreigners who will transfer their status.

KITAP for Foreign Worker
Similar to the KITAP for investors, the foreign worker applying for a KITAP must apply for a KITAS as a director or commissioner first. After obtaining the KITAS for three consecutive years, the applicant will then be qualified for the KITAP. For KITAP applications, foreign workers and sponsor companies need to prepare the following documents:
1. Passport with a minimum validity of 18 months
2. Expatriate Working Permit Card (Izin Mempekerjakan Tenaga Kerja Asing/IMTA)
3. KITAS, IMTA, SKTT for the previous three years
4. Deed and Ministerial Approval of the sponsor company
5. Taxpayer Identification Number (Nomor Pokok Wajib Pajak/NPWP) of the sponsor company
6. NPWP and KTP of an Indonesian with highest position in the company
7. Company Registration Certificate
8. Business License with a minimum of Rp1 billion as paid-up capital
9. Mandatory Manpower Report (Wajib Lapor Ketenagakerjaan / WLK)
10. Expatriate Worker Utilisation Plan (Rencana Penggunaan Tenaga Kerja Asing/RPTKA)
11. DPKK (Mandatory Skill Development Fund) funds payment proof (annually US$1,200)
12. Domicile Letter of the foreigner’s address in Indonesia

KITAP For Spouses of Indonesian Citizens
The provision concerning spouses of Indonesian citizens is stipulated in Article 60 Paragraph 2 of the Immigration Law, which states that the KITAP may be submitted to a couple after their marriage has reached two years and they have signed the Integration Statement to the Government of the Republic of Indonesia. The following are required for foreigners who want to apply for a KITAP through marriage:
1. Marriage has reached two years and the marriage is recorded in Indonesia
2. Signing a Statement of Integration to the Government of the Republic of Indonesia
3. Passport with a minimum validity of 18 months
4. KITAS (Limited Stay Permit Card / ITAS)
5. STM (Police Report Certificate)
6. SKTT (Temporary Resident Permit)
7. Marriage Certificate (should be in English or Bahasa Indonesia)
8. Proof that marriage is registered in Indonesia (for marriages held overseas)
9. Application Letter signed by the Indonesian Spouse
10. Identity Card (KTP) of Indonesian Spouse
11. Family Registration Card of Indonesian Spouse
12. Bank Account of Indonesian Spouse in the last three months
13. Domicile Letter of the foreigner’s address in Indonesia

To verify the KITAP application for investors, foreign workers, and spouses of Indonesian citizens, the immigration officer will conduct a field survey to verify the data as well as the address of the foreigner. In addition, the KITAP may also be cancelled by the immigration authorities for reasons set forth in Article 62 Paragraph 1 and 2 Immigration Law as follows:

The KITAP can be cancelled if the holder:
1. Has proven to commit a crime against the state as stipulated in the legislation
2. Undertakes activities that endanger state security
3. Violates the Integration Statement
4. Employs unauthorised foreign workers
5. Provided incorrect information in the application for a Permanent Stay Permit
6. Is subject to Immigration Administrative Action
7. The marriage of a foreigner who is legally married to an Indonesian citizen is due for a divorce and/or court decision unless the marriage has lasted ten years or more.

We hope you find the above information useful.