We call the magical device we have in our pockets a “phone”, but it really should be called a “communicator”. Amazing advances in technology in the last few years have turned the simple phone (which was amazing enough in its day) into a multi-platform multimedia communications device that gives us the ability to communicate in myriad ways with anyone anywhere in the world and, if all else fails, actually speak to them (although that can thankfully be avoided most of the time).

The word “phone” is an abbreviation of the word “telephone” and the word telephone is made up of two Greek words, t?le, meaning “far”, and ph?n? meaning “voice”. (No sonny, “phone” is not short for “smartphone” – at least it wasn’t originally.) So a telephone is a “farvoice”. “Darling, there’s a man on the farvoice who wants to know what time your flying machine lands.” Sounds much less impressive and a lot more old-fashioned when you say it in plain English, doesn’t it?

It wasn’t so long ago that we were complaining about people talking on their “mobile phones” in public places . We even used to give people a dirty look if their phone rang in a restaurant. Now when you look around most restaurants you will see people busily communicating via their “phones” with anyone who happens to demand their attention  – anyone except the people they are physically with of course. Do you remember when if you left your house or place of work it meant you were totally out of touch with EVERYONE? If you wanted to stay in touch you had to tell people where you were going and how long you would be there and actually stick to the plan, because if you didn’t your house could catch fire and you wouldn’t find out about it until you got home. 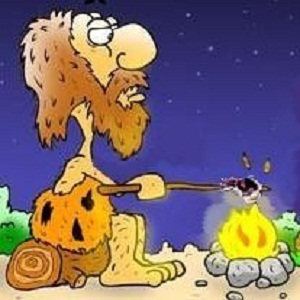 All new forms of technology are resisted by the people who grew up with the previous forms. I often imagine 60 year-old cavemen sitting round a new-fangled “fire”, looking at it cautiously and talking about how dangerous and unnecessary this new form of heat was. They got by without it for generations so why did they need it now? The young cavemen were thinking “Hmmm… what else can we do with this?” When the first young caveman started developing “writing” to record ideas, events and stories, the old folk no doubt wanted to know why he couldn’t just remember things like everyone else. And when the automobile was first invented, I’m sure it was looked upon with scorn by the senior citizens of the day because horses were already fast enough and noisy enough.