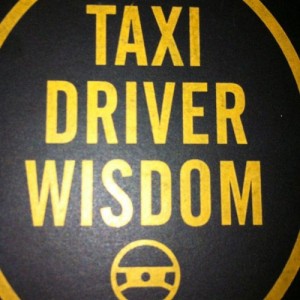 New arrivals to Jakarta are often warned to be on the lookout for taxi scams. The truth is that cab services are generally much better than they used to be.

The most common scams are: using a tampered meter, taking the unwary for an unnecessarily long ride, and failing to use the meter and then demanding an extortionate fare.

Incidentally, the Indonesian word for taximeter is argo, which was the brand name of those used in Jakarta’s first metered cabs in the 1970s. A now defunct German firm made the Argo meters, which were named after the amazingly fast ship sailed by Jason and the Argonauts of Greek mythology. So now you know.

If a driver fails to activate the meter after you have stated your destination, you should avoid saying, as I once heard an angry American shout: “Buka meter, you!” Instead, opt for the more polite and linguistically correct: “Tolong pakai argo, ya Pak [Please use the meter, sir].” Should the driver ignore such a request three times, check that he is not deaf and then politely exit the cab. If it’s flooding and there are no other cabs around, you may have to haggle.

Ten years ago, arriving at Soekarno-Hatta International Airport without someone to pick you up meant you were at the mercy of the taxi mafia, unless you took a Damri bus. Reputable cabs, such as Bluebird, were not allowed to pick up passengers from arrivals or even departures. Instead, airport guards would direct you to the city’s worst taxis. Eventually, someone realised it was dumb to give new arrivals such a terrible first impression. The airport is now served by decent cab firms, although a few touts still linger.

Some websites claim the worst thing you can do in a taxi is get in solo when blind drunk, because you could fall asleep and be robbed. During my younger and more vulnerable years, I must have passed out in dozens of cabs but I was never robbed and only rarely taken for a ride. Usually a patient driver would simply be waiting for me to wake up.

The taxis to avoid in Jakarta are those painted to mimic Bluebird and Express cabs. They are usually easy to recognise because they are dilapidated and have older looking meters, which tend to run too fast. If departing a disreputable nightlife venue, don’t take one of the cabs parked outside unless the driver is a friend or you agree beforehand to a fare. It’s much easier to walk a short distance and hail a good taxi.

Once the driver sets off, he may ask: “Lewat mana [Which way]?” This could be an honest enquiry if there are two or more routes of similar distance to your destination. Or the driver may be testing your knowledge, and if you fail, you could be in for a longer ride. Another possibility is that the driver is new in town and simply doesn’t know the way. Most drivers are honest and friendly, and some may teach you shortcuts.

Being stuck in a cab in traffic is a great occasion to practice your Indonesian and gauge public opinion. I’ve had drivers lecture me on the urgency of converting to Islam, while others have offered to procure drugs and prostitutes. Some drivers do 20-hour shifts, so conversation may help to keep them alert.

Beware if a driver suddenly stops in the wrong location – there’s a miniscule chance he may be waiting for accomplices to enter the taxi to rob you, especially if you were picked up outside an upscale mall. I recall one driver who stopped several times – to get out and urinate. He said a female passenger had paid him in sex and subsequently he developed a burning sensation while urinating. I directed him to a pharmacy and bought him a strip of generic antibiotics.

Some of the most despicable behaviour in taxis comes from the passengers. If you speak enough Indonesian, ask drivers about their worst ever customers and the results should be interesting. Occasionally, the drivers get scammed, being paid in counterfeit or near worthless foreign currencies, being robbed or being left waiting by a passenger who does a runner.

Avoid arguments over correct change by tipping well for good service. Bluebird pays its drivers at least 10% of their daily takings, whereas many firms require drivers to pay a daily rental amount of up to Rp.350,000, after which they keep what they earn.