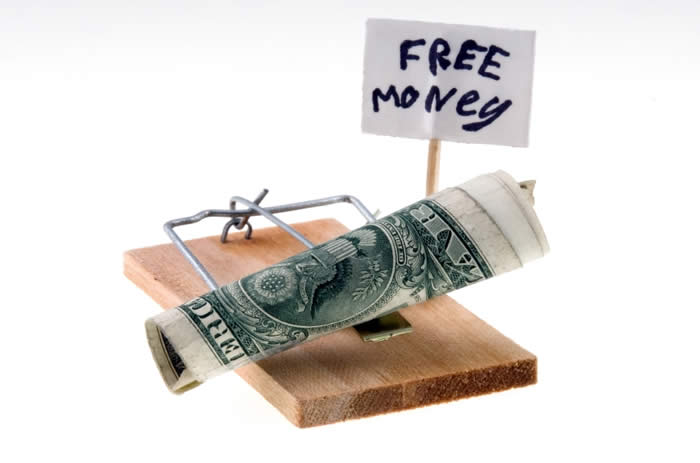 Indonesians from all walks of life are still prone to investment scams. Why? Mainly because of a lack of awareness and the promise of easy money. About 58% of Indonesians don’t have a bank account. They are discouraged by high monthly fees and minimum balance requirements. This makes them vulnerable to loan sharks charging high interest. They are also lured by scammers offering high returns in pyramid schemes.

If you go to Bank Central Asia to open a basic savings account, the monthly administrative fee is Rp.13,000, while interest is only 0.9% (for deposits of Rp.1 million to < Rp.50 million); so people earning minimum wage and spending most of it will find that a bank account ends up costing them money.

To encourage the poor to start saving, the government in 2009 asked major banks to introduce no-frills accounts, called Tabunganku (My Savings) for low-income earners. Several banks now offer these accounts, which are free to open with a minimum deposit of only Rp.20,000 and have no monthly administrative fees. The catch is that some impose heavy fees for making more than two withdrawals per month, and not all offer ATM cards. Inactive accounts are fined and those that go below the minimum balance are closed. The accounts are not widely advertised because they are not considered particularly profitable.

So rather than go to banks, many people try their luck with unregistered, unlicensed financial schemes. Scammers operating pyramid schemes commonly obtain endorsement from legislators, Muslim clerics and even police. Pyramid schemes tend to start well, providing high returns for initial investors, but when too many people sign up, the funds run dry.

Indonesians lost a staggering Rp.48 trillion ($3.87 billion) in financial scams in five years over 2007-2012. About two-thirds of the losses were from pyramid/ponzi and multi-level marketing schemes, and the remainder from fraudulent cooperatives. Most of the victims were rural and suburban dwellers without bank accounts.

Expatriates in Indonesia may also be scammed through dubious investments. Anyone who has ever made the mistake of giving their business card when entering an event co-sponsored by an investment firm will have subsequently received invasive emails or phone calls from pushy financial planners trying to sell various investments. Mostly they are offering safe returns, but at least one has sold a dud product and will be the subject of a future column here. An expletive-laden tirade should put a stop to calls from the persistent consultant who keeps saying, “How about I pencil you in for a meeting next Wednesday?”

Police also need to be more wary. A Jakarta Traffic Police inspector is presently on the run after she collected billions of rupiah for a poultry business pyramid scheme that went bust. At least six police were among her victims. The policewoman ran the business with her twin sister and her sister’s husband, a military officer. They now face fraud charges if they cannot settle the matter out of court.

Indonesia’s Financial Services Authority (OJK) has urged the public to be wary of investment offers from groups that are not registered financial services institutions. Warnings are fine, but authorities generally ignore pyramid schemes until the operators flee with the profits. Financial planners who receive commissions for convincing people to put their money into unsafe investments tend to be immune to prosecution.

There are many online businesses offering returns of up to 150% for people investing in schemes such as chicken eggs, goat breeding, cassava plantations and gold trading. For example, an egg production business sells chickens online for Rp.70,000 each and promises investors a return of Rp.700 per day per chicken for 150 days. “Your productive chicken will be expired/dead after 150 days,” declares the website, so you can collect your profit of Rp.35,000 and start again.

That may seem paltry, but if you bought 1,000 chickens for Rp.70 million, you would make Rp.105 million over 150 days – a profit of Rp.35 million. And for every person you bring into the scheme, you receive 5% of the value of their investment, and a further 2% from each person they recruit, then 1% from every person further down the chain. It’s a classic chain referral scheme that should have alarm bells ringing. Too many eggs in the same basket are going to break.

We Haven’t Learned a Thing

The Root of All Evil

The Executioners & the Graveyard