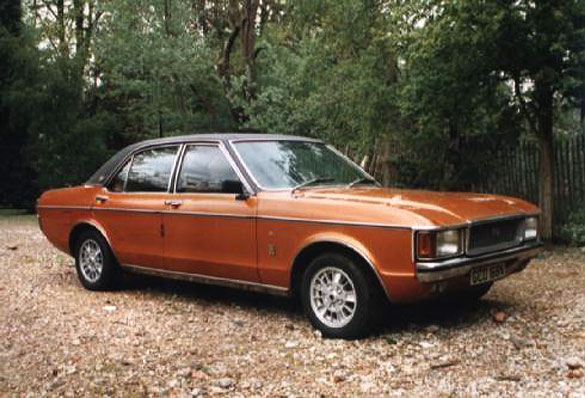 In 1987 I bought my dream car. No, it wasn’t a Ferrari or a Porsche, it was a five-year-old Mark II 2.8 litre fuel injected Ford Granada Ghia. It was my dream car because prior to that I had been driving a Datsun 260Z sports car which, although I loved it, had given me nothing but trouble and a bad back. Hence my dream car had become the complete antithesis of the Japanese sports car, the American Executive saloon. It was so comfortable compared to the Datsun that, in 1988, my friend Colin and I decided to take it on a camping tour around Germany.

Early one evening during our trip, on the outskirts of Cologne, a loud metallic grating noise started coming from somewhere near the front offside wheel. I pulled over and we climbed out cursing to see what was wrong. Luckily Colin was a qualified mechanic, so after a lengthy inspection, he started explaining the situation to me in what sounded to me like Greek. About 30 minutes into his technical analysis I put my hand over his mouth and asked him to simply tell me how bad it was. He said it was really bad, something to do with an important bit of the car behind the noisy wheel that had broken. Just down the road, I saw a sign for a campsite, so I nursed the limping Granada into the large field and we put up our tent before heading to the clubhouse to consider our plight.

After three or four large beers and no sensible ideas from either of us, Colin decided to my surprise that he could speak German. With completely misplaced confidence he approached a friendly looking young couple at the bar and said in a loud voice, “Excuzen Sie mir bitte, mein auto ist kaput.” The girl spat beer all over her boyfriend as she burst out laughing, and as he wiped the beer slowly from the front of his shirt he said dryly, “Sorry about zat. It’s chust zat you Eenglish sound zoooooo fanny ven you try to spik Cherman.” I was about to point out the irony of his statement when we suddenly became very good friends. “I tell you vot”, he said before I could speak, “I buy you guys a beer and ve talk about your ‘kaput auto’ ya?” A couple of hours later we were sitting outside Klaus and Brigette’s tent playing a very complicated board game and being entertained by their black Labrador which, they were very proud to tell us, understood five languages. Klaus went on to prove it by telling the dog to beg, sit, lie down and roll over in Italian, German, Spanish, French and English, and the dog dutifully obeyed every time. We crawled off to our tent at about 3 am after a small alcohol-fuelled disagreement, but with a promise that they would take us to see a friend of theirs who could help with the car in the morning.

To be honest I wasn’t actually expecting them to show up the following morning after our argument, but as it turned out they weren’t quite as upset about their country losing two world wars and one World Cup to the English as I thought they had been, so at about ten o’clock we awoke to the sound of Brigette’s hand-painted Volkswagen Beetle ticking over noisily outside our tent. We dressed quickly, squeezed into the back seat and, with Brigette at the wheel, headed off to see their friend. What we found when we got there amazed us. It turned out that the friend, Markus, owned a car scrap yard, and there were at least 20 crashed and scrapped Ford Granadas like mine lying around among many other makes and models. Apparently, all Ford Granadas sold in the UK since 1977 had been built in Cologne, where mine had just happened to break down, and Markus made his living by cannibalising scrap cars for spare parts. An hour later Colin finished fitting a perfectly good second-hand universal joint to my Granada and we were on our way. Markus had refused to accept any money, and, while Colin was working, Klaus and Brigette had bid us farewell and disappeared in the general direction of France never to be seen again. What good people. If you’re going to break down, do it in the right place (but don’t mention the war).