Borneo is a terrific place to visit, however hiking there from Jakarta is perhaps not the best way of setting about things.

Borneo’s mysterious heart of darkness is the theme of this week’s action-packed Indonesia Expat and I’ve been scouring my increasingly feeble synapses for anecdotes relating to the dense jungles and whitewater rapids of this tropical ground zero. It’s been a while since I slept with either an orangutan or a Dayak lady with three-foot long earlobes (they give one something to hang onto) and I’m no Joseph Conrad it would seem. Admittedly, I did recently visit the pleasant city of Kota Kinabalu on the Malaysian part of the island, however a piece comparing and contrasting the clean, vibrant and organised KK with its moribund urban-Indonesian counterparts would surely only serve to depress the R of I’s loyal expatriate readers.

So instead, I thought it apposite to recount the occasion upon which a similarly brain-damaged colleague and myself took it upon ourselves to walk to the city of Palangkaraya in Kalimantan, all the way from the national monument in Jakarta.

Now you can go straight to the top of the class and accept a million rupiah’s worth of Anker vouchers (not to be redeemed at your local minimart) if you’ve correctly surmised that such an epic hike presents a not inconsiderable problem, to wit, the 300-odd-kilometre stretch of ocean that lies between Java and the sun-drenched coast of Borneo.

Admittedly, I have been accused of having a messianic, walk-on-water complex before by a female companion, however I should really elucidate at this point and explain that my friend, Mr. Dan, and myself actually flew across the Java sea in a large jet aeroplane and that the underlying conceit behind our hike/flight was a concept known as ‘psychogeography’.

Psychogeography was first developed by a French theorist called Guy Debord in the 1950s as a, “Study of the precise laws and specific effects of the geographical environment, consciously organised, or not, on the emotions and behaviour of individuals.” An alternative definition is, “A whole toy box full of playful, inventive strategies for exploring cities. Just about anything that takes pedestrians off their predictable paths and jolts them into a new awareness of the urban landscape.” 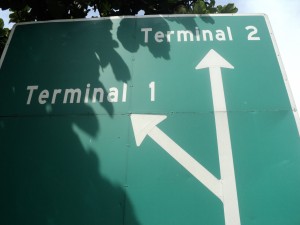 More recently, Will Self, a British novelist and spinner of darkly comic and surreal urban yarns, revived the idea of psychogeography (check out his rap at [email protected] over on YouTube for a detailed exposition). Self notes how modern, urban life isolates us on small islands of existence surrounding home, office, pub, etc. As a result, any visceral feeling that we may have for the urban geography that surrounds us is highly restricted, as travel between these urban islands is largely facilitated passively by means of motorised vehicles that are barely a century old. Thus little sense of geography, relief or scale exists imprinted in our modern minds as mental maps, and processes evolved over hundreds of thousands of years have now been negated.

Self therefore resolved to walk from his home in London to New York. Specifically, he walked from his house to London’s Heathrow airport, flew to New York, and then continued his hike from JFK airport to a downtown hotel. The physically exhausting effects of the walk, coupled with the passive, enclosed down time spent on the plane apparently tricked his brain into believing that he had traversed a single, continuous landmass.

Still with me? Well, always a sucker for an essentially ludicrous idea that’s been dressed up in a patina of intellectual theorising, my colleague Dan and I set out from Monas at 2am one fair evening and began a long hike to Soekarno-Hatta Airport for a midday flight to Palangkaraya. We elected not to head along the toll road and instead followed the main city artery of Jalan Daan Mogot for a good 20km before hanging a sharp right and trudging the final few clicks to the airport. 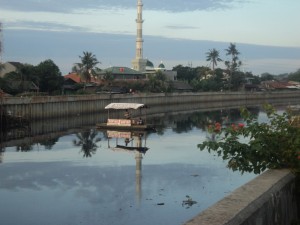 The early stages of the slog were a haunting urban night hike fuelled by large cans of Anker (the importance of decent hydration on long hikes cannot be overstated). Dawn was soon upon us however and we were able to take the full measure of our post-apocalyptic surroundings. Ammonia wafted across the canal and into our eyes and piles of rubbish smoked carcinogenically while underclass children sporting interesting skin conditions played away among the ruins of West Jakarta. It’s the city that never sleeps folks, which is why it looks so bloody awful the next morning.

The sun rose ever higher in the sky, the juggernauts pounded relentlessly at the asphalt and fatigue started to take its toll on our limbs as we neared Terminal One. The concrete and noodle-packet shantytowns finally gave way to the start of the airport toll road that we joined from the south, along with the airport’s comparatively verdant area of lake and trees that I usually only see through a taxi window.

The final, painful hour of hiking through the now roasting sun eventually carried us into the terminal building. According to Dan’s Charles Babbage, steam-powered GPS device, we had walked 26km and felt a real sense of achievement at having scaled heights of mental instability that few manage to reach. Certainly, incoming social-media comments were unforgivingly harsh in their general assessments of the project.

After a short flight, we recommenced our hike on the lush island of Borneo. The final 3km stroll into town through the bucolic tropical countryside surrounding Palangkaraya Airport was a relative breeze after the purgatorial wastelands of West Batavia. Any sane person would have started hiking from here instead. It had been a memorable trip certainly, although I should ’fess up here and reveal that the following day’s return leg was not undertaken on foot. So is anyone else up for the challenge? Supping cocktails on a beach in Bali is so 2014.

Open Letter to the Gracious People of Indonesia