Anthony Burgess’ begins his marvellous series of novels, The Long Day Wanes, (aka The Malay Trilogy), with Flaherty, a British police lieutenant, pointing his colleague Nabby Adams (and Nabby’s dog, Cough, so-called because he keeps getting under people’s feet) in the right direction.

(Remember, the story is set in Malaysia.)

“ ‘East? They wouldn’t know the East if they saw it…That’s where the East is, there,’ he waved his hand wildly into the black night. ‘Out there, west. You wasn’t there, so you wouldn’t know. Now I was. Palestine Police from the end of the war until we packed up. That was the East. You was in India, and that’s not the East any more than this is…’ ”

This illustrates the contradiction between cultural perception and geography, which places Australia and New Zealand, far to the “East of Suez”, in the “West”, and southwest Asian countries, and, until recently, even North African countries as far west as Morocco, in the “Near” or “Middle” “East.”

The book’s title refers to the British Empire, on which the sun supposedly never set. When it did, it can be said to have set in the East, if the handing over of Hong Kong was its last flicker.

Traditionally, the “West” was seen as thrusting, rationalist, materialistic and technically superior, whereas the “East” was timeless, spiritual, exotically mystical, and technically backward. To quote Kipling, “Here lies a fool who tried to hurry the East.” The Chinese, for example, were seen as patient, cunning, and “inscrutable”, adept at concealing their emotions.

However, the Japanese, with their technical innovativeness, never conformed to that stereotype, with the founder of cyberpunk literature, William Gibson, for example, seeing Japan as the perfect simulacrum for our future wired techno-culture. And if you want to see some “inscrutable” Chinese, just YouTube the cult videos of the Taiwan Parliament.

The confusion between “east” and “west” also happens on a more mundane level – writers just get them mixed up, which they never do with “north and “south”. For example, one thriller writer, Eric Ambler, criticized another, Ian Fleming, for confusing the Golden Horn and the Bosphorus in Istanbul, but Ambler himself, in his classic The Mask Of Dimitrios/A Coffin for Dimitrios, has the Turkish army in 1922 advancing on Izmir/Smyrna from 200 miles west, which would have put them just outside Athens, the last place on earth they would have wanted to be.

And talking millennium, here is a true story. At New Year in 2000, a group of Bandung International School students, holidaying in Bali, rose early and jogged to Kuta Beach to watch the sun rise on the new millennium. Yes, Kuta Beach… After a while, and no sun, one of these expensively educated geniuses realized that Kuta faces west. 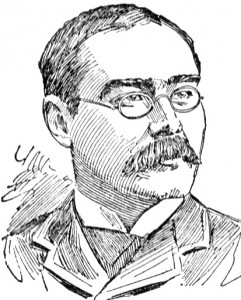 Back to Kipling, and here is the full text of his introduction to The Ballad of East and West.

“Oh, East is East, and West is West, and never the twain shall meet,
Till Earth and Sky stand presently at God’s great Judgment Seat;
But there is neither East nor West, Border, nor Breed, nor Birth,
When two strong men stand face to face,
tho’ they come from the ends of the earth!”

So let’s not take the first line out of context, and surely our mission, including the “strong men and women” who read Jakarta Expat, is to take and blend the best of “East” and “West” into a tolerant, respectful and flavoursome global culture.

Unless the whole thing gets reversed. Over the previous millennium, a host of seekers and pilgrims, including figures like Paracelsus, Blavatsky, Gurdjieff, Ouspensky and Husein Rofe, made the “Journey to the East”, seeking in Asia sages who could enlighten them on the meaning of life.

Imagine, now, our seekers, abandoning the soulless materialism of Asia/Pacific, crossing the Bosphorus and, fortified with talismanic garlic, wending their westward ways through Transylvania and the Carpathians. Some will take the northern route, revelling in the esoteric ceremonies of Walpurgisnacht on the Brocken in Germany; others will take the southern route through France and Rennes-le-Chateau, mingling in its reputed Magdalenian mysteries.

Then our pilgrims will cross over to Britain, full of western promise, and absorb the holy vibrations of such sacred sites as Glastonbury, Bardsey and Rosslyn. Finally, they will merge into the Celtic dreamtime, and, in some Hebridean cave or Atlantic island, encounter a sage like the ageing Bono, Shakin Stevens or Billy Connolly, who will fulfil their Quest by providing them with their own true customized point of the compass.