Roberto Di Marco was born and grew up in Rome, Italy. He attended a liceo in Rome, earning degrees in philosophy, psychology, criminology and forensic psychiatry. Roberto has worked as a teacher for handicapped children, taught literature in secondary school and history and philosophy in high school. From 1982 to 1989, he was a lecturer in the Department of Neurological Science in an Italian University and has also worked as a counselor for couples and the mentally ill. To research an anthology of expat life, Roberto lived six months in Cebu in the Philippines and two years in Phuket in Thailand. In 2014, Orchid Press published Roberto’s What Do You Pack If You Are Never Coming Back, a compilation of 15 true stories of expats who left their past behind to start a new life in a foreign country.

What do you think motivates people to move to another country to live and work?

People often have very established habits and need a strong motivation to leave their country. The most common reason to make a radical geographical change is a desire to improve their economic conditions. But there are many other reasons: to move from a rich country to a poor country where their money is worth more; men looking for wives and lovers; the increased economic power that offers a greater choice; the allure of a more temperate climate; the attraction of a more natural way of life, free from constraints and formalities. A minority, mostly dissatisfied artists and writers, are interested in discovering new dimensions in their lives. Bali, for example, is more suited to the artist than to the business person.

Why does living abroad change us?

Knowledge of different countries and new ways of life helps people become masters of their fate and not a victim of the system. At home, each of us exists in a limited environment, confined to only what we can see and experience in our immediate surroundings, i.e. what our neighbours, friends and co-workers are doing. We all think that this is normal and perhaps even the best way of living. But often we want something more, sometimes without even realizing it.

Which Asian countries are the most favourable for expats to live in?

I personally like busy international tourist centres like Bali in Indonesia and Phuket in Thailand where you find fantastic nature and eternal summer but also services for people from all over the world. In these places you find a different way of life, yet you are able to enjoy almost all the habits and comforts found in your home country. In countries such as Laos, Cambodia, Philippines and in northern Thailand, an expat can live for less than 1,000 Euros per month. In a town or area with few expats and tourists, you can live even cheaper.

Can you give examples from your book of expats who have made successful lives for themselves overseas?

I always liked the story of a Spanish man who was leading a boring life in Spain as a clerk, then he became a seaplane pilot in the Philippines, which — to say the very least — opened up new vistas for him. Another story is about a man who was chased by the mafia and ended up in Bali.

What are the best practices and attitudes to have to make a success of living abroad?

Be open to changing your habits, don’t judge others and don’t be inflexible in your opinions. Take the opportunity to test yourself in unknown situations. Try to understand different ways of seeing and thinking. Visit places other than those in which you can meet your fellow countrymen. Many compatriots meet often in the same places, which predictably just recreate in an overseas setting the lives that they lived in their home country. This is understandable. We all want a sense of belonging in a familiar group, but it’s also important to be part of the culture of ‘the other’, to come in contact with different people from other countries and walks of life. This doesn’t mean of course that you have to renounce your identity or accept blindly everything that is culturally new.

What are the most important steps an expat should take after arriving in his or her adopted country?

Get as much information as possible beforehand on the new country’s culture, customs, health services, retirement life, tax laws, visas, ways to save money, etc. It’s important to know what kind of dangers exist, such as risks of disease or criminality, as well as which areas and neighborhoods are safe to live in. Expat blogs are especially good for tips and useful information for those who want to fit in. Studying the language of the adopted country will make it a pleasure to mix with the locals, so buy a dictionary and phrasebook.

What are the most frequent causes of an expat’s failed attempts to live abroad?

Sometimes expats behave as if they are still in their own country, ignoring the rules and what is acceptable behaviour in their adopted country. Often conf licts occur in mixed marriages, for example when a Catholic marries a Muslim. I know of one instance in which an Egyptian married to an Italian woman took his 12-year-old daughter on vacation to his country where he forced her to undergo a clitoridectomy. His wife was outraged and asked for a divorce. Now the daughter does not want to see him, is burdened with a serious identity crisis, acts like a male and eats pork in defiance of the Muslim religion. 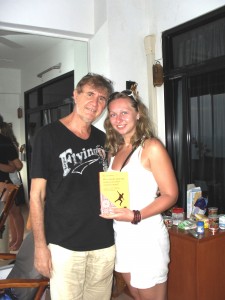 What should one be prepared for when marrying an Asian woman?

Marrying a Filipina, Javanese or a Thai woman may mean that relatives and friends will be frequently visiting or living in your home, which may require you to sacrifice privacy. Expats may have to reconcile the sense of community that an African or Asian wife feels with the individualism that a European prizes. For an English person, family difficulties are resolved in private, but for an Ethiopian it is normal to involve relatives and friends in the resolution of family problems. Will your African or Asian spouse be amenable to a Westerner’s tendency to criticize everything? Would he or she be willing to become passive in order to keep the peace?

Are there any good movies about expat life?

The film The Song of Carla is an eye opener for those thinking of marrying someone from a different culture. In the course of hero Ken Loach falling in love and taking a journey into the unknown world of his partner, he is swept up in the political cause of her people.

So, what do you pack when you go to live in a new country?

An Italian-English dictionary as well as an Italian-whateverlanguage- of-the-new-country dictionary. I also carry books on a wide variety of subjects about the adopted country.

How can you be contacted?

Email me at [email protected], or visit or visit my website www.bobdimarco.com

How to Find a Proper Dentist in Indonesia

What to Watch Out for When Renting Property in Indonesia