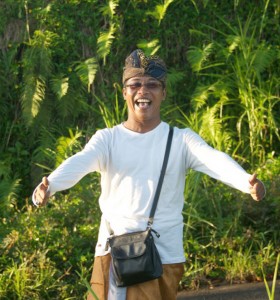 Leaving his village at the age of nine and finding himself on the streets of Jalan Diponegoro, the main street of Denpasar, alone and homeless, this is Dana’s story.

Dana relied on the good heartedness of others and only one meal a day for some time until his entrepreneurial skills kicked in and he started selling flowers to survive. About a year later, he secured a job on a construction site earning Rp.45,000 a month. Surveying the streets scenes from above on a scaffold showed him another side of life. Dana could see a world of tourists and visitors from other countries and as tourism was booming all around him, so was his curiosity.

Realizing he needed to learn and speak English if he was to progress, he enrolled at an International English College. The study fees were Rp.30,000 a month and living on only Rp.15,000 a month proved very challenging. He knew at this time, the sacrifice would be worth it, and seven months later he graduated.

Dana then secured a job as an office boy in a travel agency where he worked for five years learning more about tourism and what was required to be a tour guide.  This led him to start up his own business at 17 years old and with the assistance of some financial support from friends, he was now his own boss and on his way to being a business owner.

The year 2005 was a pivotal one for Dana as he had a chance meeting with a businessman from Australia who was running courses at one of the five star hotels in Ubud. Rex from Australia turned out to be a major influence in Dana’s life and his advice was “keep planting the garden and the butterflies would come”. This year, he also met the love of his life and got married.

Shortly after this time he started a tour company, and in 2007 another chance meeting occurred with some travel agents from Australia who took Dana into their world and assisted him with acquiring some well-connected people in the industry. Dana now has five vans and a very busy and successful business, so the butterflies have truly arrived.

From Dana’s experiences, and a very difficult life surviving on the streets of Bali, he has learnt many things, however he will never forget the kindness that he received from many people along the way and now wants to give back, providing training and education for young children through his “Chicken Little” English teaching program in his local village. He also supports an orphanage in Tabanan and has a determination to help other Balinese people to start their gardens and attract more into their world.

The amazing thing about this man is his attitude and his wonderful sense of humour. He is an example of how tourism encourages the positive aspects of progress and growth in Bali.

Dana is always looking for English teaching volunteers to help out with his Chicken Little School, a home-based village school on Sunday mornings. Please contact him if you want to help out and if anyone needs a reliable, happy tour guide Dana can be contacted on 081338712047 or [email protected]

David is a Bali expat resident and organizes photography tours throughout Indonesia, specializing in Bali.  www.davidmetcalfphotography.com