Chris Slappendal is an advocate for all endangered species and their habitats, whose passion for the Sumatran tiger led him to found the TigerTrail project.

The Sumatran Tiger [panther tigris sumatrae] is the smallest of the remaining five tiger subspecies on Earth. It has lived exclusively for the last million years in the once-extensive tropical jungle on the island of Sumatra. The tigers’ population in the wild is heavily fragmented. Groups ranging in size from just a few to several dozen can be found principally in and around the Sumatran National Parks. Sadly the parks have been under siege recently, due to a proliferation of palm oil plantations and the deforestation which precedes them.

The Sumatran tiger represents a uniquely hopeful opportunity for the survival of a pure subspecies in the tiger world. The Sumatran tiger is small, due to limited natural habitat and smaller prey. They weigh on average three hundred pounds, and may be up to eight feet in length. Extremely fast swimmers, they feature webbing between their feet. Indeed, this animal is genetically and geographically isolated, offering field biologists the opportunity to study the effects of genetic isolation of a subspecies versus those which have been able to intermingle. As a result of this research, important first-hand field data has been generated which is relevant to all surviving tiger subspecies.

In 2012, Dutchman Chris Slappendal decided to dedicate a year of his life to saving tigers. By 2013 he had started a project called TigerTrail, to tell the world about tigers and the sad environments they live in, including tigers in captivity.

He feels it is imperative that education efforts are stepped up to raise awareness about the deterioration of our natural ecosystems, and the endangered species which depend on them.

Without our natural ecosystem intact, even humans will not survive. 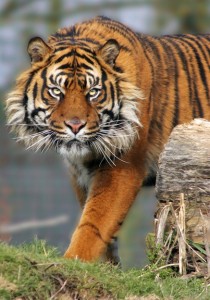 Since 2013, Slappendal has visited 23 countries, all of which had tigers or still have tigers. Currently tigers roam in only 13 countries, whereas a hundred years ago they were present in 30. Tigers have lost 93% of their habitat in that time period. Slappendal feels Indonesia is an important country for tigers and their protection. Indonesia previously hosted three subspecies of tigers, but two have already become extinct: the Java and the Bali tigers. During his TigerTrail travels, Slappendal visited both areas, to see why tigers were wiped out, and to learn about the specific circumstances of these extinctions. On visiting Sumatra, Slappendal was frightened to see how fast the palm oil industry has taken over not only precious rainforest but parts of protected areas such as Kerinci Seblat, despite its protected status – posing great risk for the Sumatran tiger.

To that end, Slappendal started the Tiger Trail project, to raise awareness, spark debate and garner publicity for the cause. The organisation remains in touch with other conservation groups and governmental organizations such as JAAN, ASTI, and the Harimau Kita forum (which represents many NGOs), with the main aim of cutting cross-purposes and uniting forces in their common efforts to save the Sumatran Tiger.

Slappendal’s next project will start in the Netherlands. He is going to sell ecologically and socially pure T-shirts. All profits shall go to initiatives to save wildlife. The brand will be called Icons of Nature. There will be a platform built where up-to-date content about wildlife may be shared, like a marketplace, so people can learn more about their favourite animal. Once operational, Chris plans on bringing it first to Indonesia, where the Sumatran Tiger will be a priority.

Chris says, “I love the country, the people and the Indonesian kitchen. But to tell you the truth, what stole my heart was the Sumatran tiger. When I saw my first one in Jambi, it made my heart leap!” Long may this passion last to help such a beautiful, unique Indonesian creature.

Thank you Chris, Tiger advocate for life! To get in touch, go to www.tigertrail.org