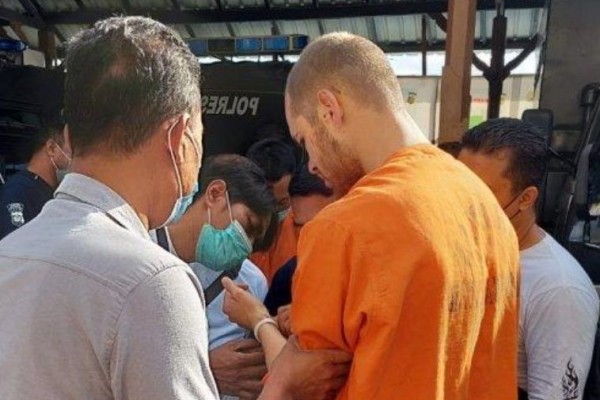 A Russian man has been arrested by the Gianyar Police because he was caught trying to steal a Honda Vario motorbike in Kenderan Village, Tegalalang District, Gianyar Regency.

It is said that the man had run out of money during his trip to Bali.

The man, known as Georgi Razhin, tried to steal a motorbike parked in the Pondok Wisata Ika Kitchen area in Kenderan Village at around 02:00 am local Bali time, by jumping over the villa guardrail.

When he was about to take the motorbike, he was blocked by an iron chain and then caught by security personnel. When secured by a local security guard, Razhin got angry, causing the manager to report the incident to the Ubud Police Headquarters.

“After receiving the report, we then have secured the perpetrator along with the evidence,” said the Head of the Gianyar Police, Police Grand Commissioner Adjutant I Made Bayu Sutha Sartana, on Wednesday 29th June 2022.

The police who received news of Razhin’s arrest from the security guard then went to the scene. Initially, he was detained in the Gianyar police station cells. However, Razhin was eventually placed in a correctional facility.

He was transferred after going on a rampage and breaking the cell’s iron bars to the point of disturbing other prisoners.

“We threw him in jail for disturbing the inmates. He kept screaming until he peed,” said Sartana.

As a result of his behaviour, the police have also taken Razhin to the psychiatric hospital in Bangli Regency to have his mental condition checked. The results show that there isn’t any problem with his mental health.