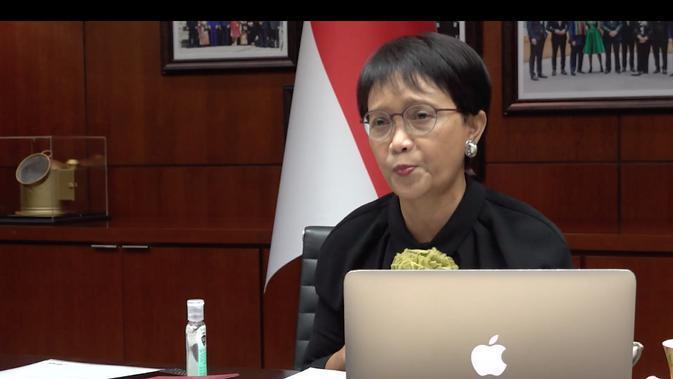 Retno firstly pointed out that, according to the World Health Organisation (WHO)’s Director-General Tedros Adhanom, “we are in a dangerous period of the pandemic as no country has yet won the battle against COVID-19. We are seeing surges of cases and deaths, especially in parts of Africa, Asia, and Latin America resulting from the new variants.”

Thus, the Indonesian government is continuing to secure more vaccines. Since the early months of the pandemic, Indonesia has been among the countries actively securing vaccines for their people.

“More than 100 million doses of vaccines have been secured up to now. To be more exact, Indonesia has secured and received 119,735,200 doses of vaccine, both from bilateral as well as multilateral cooperation,” explained Retno.

With the vaccines that Indonesia has secured so far, said Retno, the country is able to vaccinate 49.618 million people, making it the fourth-largest vaccination drive in Asia.

In the coming days, Indonesia will be receiving more than 3 million Moderna vaccines from the US as the first shipment and more than 1.1 million AstraZeneca vaccines from Japan as the second shipment.

“This is not an easy endeavour due to supply and manufacturing constraints,” commented Retno.

As one of the co-chairs of COVAX Advance Market Commitment (AMC) Engagement Group, Retno explained that this engagement group, together with Ethiopia’s Health Minister and Canada’s International Development Minister, is established to facilitate the work of COVAX AMC.

Significant progress has been made on delivery since the first doses began rolling out to countries in February. “COVAX has shipped more than 93 million doses of vaccine to 133 participants, 81 of which are members of AMC. Over 528 million doses have been committed to COVAX by donors through the doses-sharing mechanism. This is an important gesture of solidarity and must be replicated,” she said.

“Our vaccinations still do not cover all of the vaccine targets, so it is important for us to understand that this third vaccination is only given to health workers,” said Budi.

Currently, health workers are prioritised to receive the COVID-19 vaccine because they are the group most at risk of being exposed to the virus.

In addition, the Food and Drug Supervisory Agency (BPOM) and Indonesian Technical Advisory Group on Immunisation (ITAGI) have recommended the Moderna vaccine be used for the third dose. “So that it can provide maximum immunity against the variations of existing viral mutations,” he said.

In terms of oxygen tanks, Budi said 2,400 tons per day are being prepared. The previous need for oxygen was around 400 tons per day. However, after the current spike in COVID-19 cases, oxygen demand has risen sharply, moving to 800 tonnes per day and reaching 1,000 tons per day.

“We have prepared how to supply that much oxygen needed for each hospital in Java and Bali. Later we will replicate the system for hospitals outside Java,” said Budi.