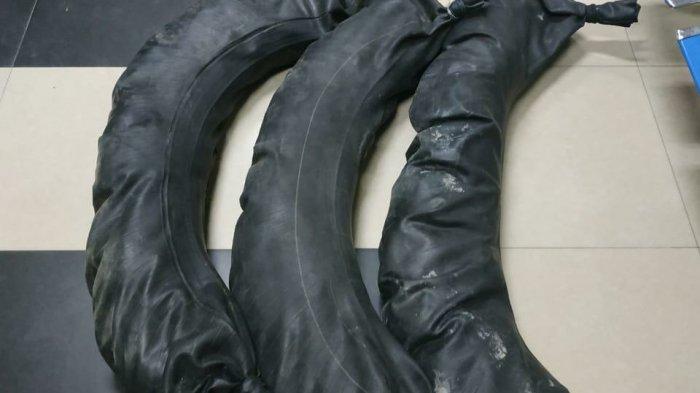 The BNN, or National Narcotics Agency, has discovered a large drug syndicate smuggling 81 kilograms of methamphetamine and more than 100,000 ecstasy pills in the inner tubes of car tires.

A member of the group was shot dead, while others were arrested in Tanjung Balai, North Sumatra. Inspector General Arman Depari, deputy of BNN’s eradication division, stated that the evidence has been completely secured. The 8kg of meth was reportedly split into 70 packets, while the 102,656 pills were put inside 20 packages which were all hidden inside car tires.

“The team secured three inner tubes containing narcotics confirmed to be meth and ecstasy. So the narcotics were hidden inside car tires,” Arman said.

The BNN claims that the first two suspects have admitted that they have kept meth in a house at Lubuk Palas, Asahan Regency.

“The BNN team went and found one inner tube containing narcotics behind the house. The team also secured the house keeper, Fadli,” he added. The suspects also provided information to the BNN team about other members of the group, which led the BNN to arrest four more people. The fifth person was shot to death as he was resisting the police officers.

“Currently the suspects and the evidence are secured in the BNN headquarters in North Sumatra for ongoing investigation and further developments,” the policeman added.