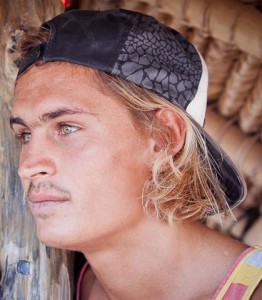 Maksim, where are you from?
Originally I’m from Kazakhstan. I lived in the capital, which is Alma Atta. From where I lived you could see the high mountains. It’s beautiful when it’s warm out – with green meadows, flowers and streams. Also we have very good food; natural and local. Russia has so much land and a lot of it is still very untouched.

When did you come to Bali and how did you discover Bali?
I came five years ago for surfing. When I was a kid I thought I wanted to travel to America or Europe, but the ocean called me. I never heard about Bali – I just looked up where the best place to surf is and I read about Indonesia and Bali, so I came here. Now everybody in Russia knows about Bali. You even see signs in Bahasa, English, and now Russian!

What is your favourite surf beach and what beaches do you go to everyday living in Kerobokan?
My every day beach is Canggu and Echo beach. My favourite surf spot on Bali is Keramas because I can get barrels there! I go to Sumbawa when I can to surf and enjoy the simple life that is still there. My friend has a boat and we go out to find great spots!

Why did you want to leave Russia?
It’s cold and there’s no surf. We come here to live in a better way and enjoy the important things in life while we can. Russia is a hard country. There are many problems there, as there are in other places. Capitalism is good for some people, but can be brutal for others. There are a few very rich people and many people who suffer. Well, I guess this is happening everywhere now. It is just more difficult for all the people in cold countries that were industrialized and now labour is cheap to compete in the world’s economy. It is all too serious.

Did you surf before?
No, but I was a skateboarder since I was ten years old, so I have that feeling. If you are a skateboarder the next step is to ride waves. When you snake a street, after a while you want to snake a wave! You want to feel the music of nature move under you. I knew that was what I wanted to do. What surprised you the most about Bali?
Traffic and so many people mixed in one place. It was my first time in Asia. People were everywhere, doing everything. I thought it would be mostly Balinese people, but it’s not anymore. It seems like more than half the people on the beach are from other parts of Indonesia. I guess it’s for work, but plenty of Balinese need more work, too. I was surprised by the amount of pollution and garbage and people all mixed up in traffic. I thought it would be more wild, with more jungle, but people don’t seem to care about nature. They just throw trash everywhere, burn plastic and cut trees. Everybody wants to be western and modern. It is stupid because just look at what is happening in western countries now.

Do you like the ceremonies?
Yeah, I like them. I think it puts a lot of good energy everywhere. Maybe that’s why Bali attracts people to it. So much of Bali’s culture has to do with the power of nature and worshipping that power, like the gods are in everything, everywhere. But they leave so much garbage! I noticed that after Melasti, the beach was covered in plastic cups and other garbage; it is sad. I don’t understand this lack of respect after giving offerings to nature and its forces.

Do you think a lot of expats take more than they give to Bali?
No, my friends are all very good people. We live simply and share what we have with who needs it. None of us are here to make money. We just enjoy the surf and the nature. But those are my friends. I know there are people who come here to make money and they probably do not give back like they should. That is the same everywhere though. The rich take and the poor give. It’s a global situation.

What do you think about food in Bali in general?
I like the local fast food when its good – a good bungkus. But I was surprised at the low quality of the milk. In Russia we get real milk and local natural foods where you know what it is you’re getting. Where did you grow up and go to school?
When I was very young and before school I went to live in Mallorca, Spain with my family. Then from the age of seven to 12 I went to school in Russia. Then until I was sixteen I went to school in Prague, Czeck Republic. Then back to University in Moscow where I studied law for two years, but I stopped because I didn’t like it. Then I went to College for a year for management. Then I came to the sun to surf.

Have you gotten into any business ventures here in Bali?
Besides some consulting for management, no. I see other people busy making money and getting more and more and I think that would be boring. I am here spending a small income from past works. I don’t need much. I don’t want much.

What do you want to do with the rest of your life?
I want to travel and surf all the best surf spots in the world. Right now I’m happy to be here and travel to different islands. What I think about most is what island I want to visit next!