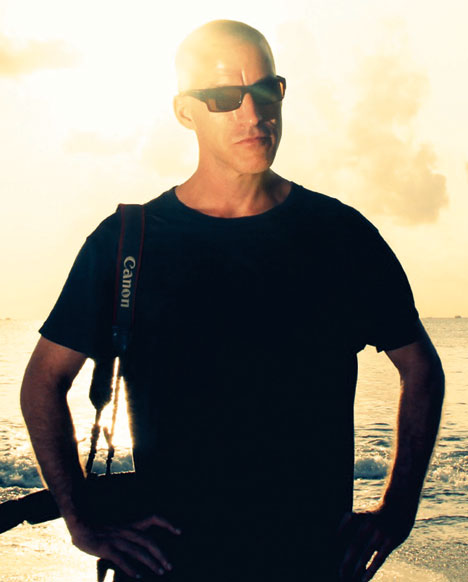 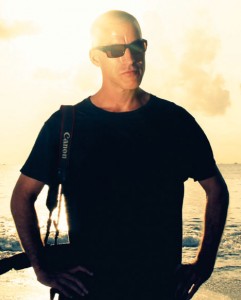 Meet John Bergman. A professional photographer who enjoys living the dream in Bali.

John, you are now a photographer in Bali shooting clubs and villas, however you started as a graphic artist. What got you into the graphic arts?
When I was just six years old I was designing horror movie posters and moved onto sculptures in high school. I always wanted to be an artist but I took a detour and joined the military. I found that the US Navy didn’t work for me with too many strict rules and nothing artistic – I was an electrician, changing batteries, etc. After being in the navy I studied at Wayne State University and majored in Fine Art.

Who were your heroes or main influences growing up?
My influences were Van Gogh, Picasso and especially Man Ray who is very experimental.

What work are you most proud of?
I’d say Kellogg’s Cereal – Star Wars franchise. We were advertising Star Wars Episodes One, Two and Three, and I was an illustrator and re-toucher.

Would you say that design is a hobby?
No, I worked during the day and partied at night. In the early 90s I took an interest in DJ culture – electronica, house, rave and techno, mainly between 1989 to 1993 in Detroit. Whilst working in advertising, I started to DJ as a hobby and was a photographer for DontStayIn.com, around 2007 to 2009. It was non-paid but I did it to get recognized as a photographer. I also had a day job as a graphic artist and was shooting clubs on the weekends.

So why did you move to Bali?
Basically, I took a holiday in London and a saw Laurent Garnier at a nightclub called The End where I met a girl. I kept contact after I moved back to Chicago, and then we spent another two weeks travelling around Italy and then after I got back from Italy I was working on fumes due to the 2008 financial crisis.

Later she went to Bali on a culture programme and invited me to come and stay with her for six months which worked out alright. I didn’t really work, and just travelled around Bali and Java. One of my friends mentioned about this new movie being shot called Merah Putih 2 who were looking for extras and I got cast. I was in the jungle being a Dutch soldier with a group of 10 crazy guys. At night we drank beers and went to clubs in Bogor and that’s where I met the two owners of Indonesiaclubbing.com. I told them I had shot clubs in Chicago, they said that was great and they were looking for a good photographer to shoot for them in Jakarta. How did you find clubbing in Jakarta compared to the States?
Depends on where you go. Clubs in Jakarta are bigger and fancier. I’ve never seen anything like Stadium in the States…

So what happened after your spell with IndonesiaClubbing.com?
I came back to Bali. I like Bali so much and my girlfriend was still living here for about six months so I went back to Chicago and sold up, including selling my 1969 Vespa.

Do you have any favourite haunts in Bali?
Normally Hu’u Bar, Mint and Pyramid. Places like Hu’u Bar and De Ja Vu have more Indonesians as customers and I think that’s a good thing. Maria Magdalena is also a good one and I’ve had many crazy times there.

Are you settled in Bali? Or have you got plans to move on?
When my girlfriend comes back, we’ll be looking for a villa. She works six months a year as a bar manager in Saint Rafael. I think I’ll be travelling back and forth for a while.

What can we expect from John Bergman in the near future?
Well, let’s see… I’ll keep on shooting clubs and villas but I plan to focus on website design and development.

What do you say to all the plus 40s who sit at home on Saturday night?
The concept of life is happiness… and it’s relative. I had a wife and kid in Chicago, and in Bali I live like a teenager!

Finally John, what are your all time favourite parties?
In the world, The Winter Music Conference, 2008. In Bali, probably The Underground at 88 Kerobokan. This party was in the basement and DJ Minuro Funky Gong was headlining. Also W Retreat and Spa’s opening where they had two back to back parties. And also Kevin Saunderson and Derrick May at Potato Head Beach Club.

Setting Sail for the Waters in the East: Meet Britta Slippens