We are approaching the dry season and that is good news for one hardy bunch of Jakarta residents: the running community. Or should that be communities? There are several including the various hashes, Jakarta Free Spirit, Indo Runners and Senayan Runners, with more cropping up all the time.

Evidently, running is getting more and more popular; you only have to see the ever-increasing number of sponsored events shutting down main arteries in Jakarta to get a sense of the interest in putting one foot in front of another at speed.

What started out as a bit of exercise is rapidly morphing into a lifestyle with the dedicated few building social lives around the activity. On a recent trip to Bangkok, for example, I met a friend of mine who was on his way to compete in a race in Sihanoukville, Cambodia with some friends.

It’s not about buying the latest Nikes and trying to look cool – for more and more people it is an activity to be shared and enjoyed in the company of others.

Scott Cunliffe is one such example. He took up running back in 2010 in a bid to curb the excesses of the night before. This meant the Hash was out of the picture, so he looked around and settled on the Senayan Runners, a small, close-knit friendly bunch of runners who do their thing on a regular basis at the Bung Karno Stadium in the centre of Jakarta.

“We take our running seriously,” said Scott as he explained the attractions of the club. “We hire a running coach to help us to develop as runners, but we still have a good laugh together and what happens off the track stays off the track,” he smiled.

While many see running as something they can do near their house, half a dozen Senayan Runners recently set off to take part in the Tokyo Marathon. Some went with their families, some stuck around to go skiing – like I said, more than just running.

“We are a community of runners largely Jakarta-based who run in Senayan (on the running track inside the stadium). We have a great coach, Siprianus, a former national athlete, who gives us great tips and motivation,” added Scott.

One of the exercises they do is something called interval running. Here they may run 400 metres 10 times with a short break in between, the idea being to hold a steady pace or even increase it. 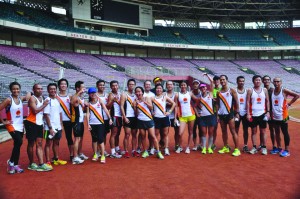 Training is carried out every Tuesday and Thursday at 6am, while the weekends see the group venture out on longer runs like half marathons, or the full 26-miler. There are also a few triathletes in the group who add cycling and swimming to their efforts.

I sat with Scott in a well-known watering hole in Kemang. Comfortably middle-aged and manifestly fit, he was sipping water while I necked my beer. The casual way he was dropping references to sprints, marathons and intense training sessions was making me feel uncomfortable as I struggled with my bulk on the bar stool. To be fair, the Englishman had just spent the last three or four nights on the town following his Tokyo exertions, but he was already planning to get running as soon as possible.

Senayan Runners boast a hard core of 15-20 runners, and while it is open to new members, they are keen to emphasise the running side of their club.

However, Scott is keen to stress the camaraderie in the group. As someone who is actively in conflict resolution in his day job, he recognises the positive effect running can have on people and explains the club has members of all faiths, races and creeds. United by running.

“Because we are close-knit, we know our strengths and weaknesses and that means we are able to offer each other support that is perhaps more heartfelt than your typical ‘come on, you can do it’,” explains Scott.

It does seem like during the dry season hardly a weekend goes by without some large running event and I wanted to know what was driving this surge in interest.

“I think as the middle class expands,” he says, “people obviously have a bit more cash in their pockets and are looking for ways to spend it. And also, people are more aware of their health. We saw this in the West back in the late 70s and 80s as people took up jogging and going to the gym. The same thing is happening here.”

The ‘latest craze’ element is something the Senayan Runners are fully aware of and is perhaps one reason why they are not as evangelical as other groups. Not for these guys, the frivolity of brightly coloured running shoes worn by people with selfie sticks.

“When I first started running you would get 200, 300, 500 people at a race. Now it can be up to 10,000. It is booming and now you have these gimmicky-type runs (The Colour Run for example) and people get involved because of the publicity, but they find they enjoy it and become really active in the scene,” Scott says.

Summing up, Scott highlights the community feeling in the group and reflects on the backgrounds of the people he now calls friends musing how he could apply these experiences to his day job as he seeks to improve inter-faith dialogue in fractious zones across the country.

Interested? Check out the Senayan Runners on their Facebook page or get your best Reeboks on, head down the Bung Karno Stadium early Tuesday and Thursday mornings and be prepared to show a clean pair of heels to the competition.