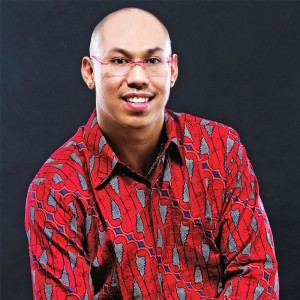 The family name, Soeryadjaya is synonymous with power. Edwin Soeryadjaya has been incredibly successful with energy company PT Adaro, among other businesses, and his brother Edward Soeryadjaya with PT Astra (until 1997), and recently, the MRT revitalization project of Jakarta. Grandson of the late, and oftentimes related to as great, William Soeryadjaya, Adimas (Danny) Soeryadjaya has taken the power of his family name to a more spiritual level, starting the meditation school, Soul Centre in Jakarta. Danny aims to pass on his knowledge and wisdom to those wishing to better their lives, by starting within themselves through the art of meditation. I met with this young guru at Hotel Garden Kemang to learn more about his story, teachings and methods.

“Did you know that the average human has over 60,000 thoughts a day?” Danny asked me as we discussed his meditation practice. I knew I personally had many, but didn’t realize the true scale, which horrified me somewhat. “Thoughts will affect your emotional state, as they lead to feelings, and this will affect the actions you take, so you have to manage your thoughts well.”

At 29 years of age, Danny may not look like your average spiritual guru. Dressed in modern attire in his chosen colour of pink (in admirable commemoration of the fight against breast cancer), he may be the opposite of what one may expect from a certified meditation teacher. He speaks openly and honestly about his experiences, not forgetting a good laugh and giggle along the way.

Danny’s spiritual journey has been an interesting one, starting in Singapore. Whilst waiting for a work permit, he took on as many activities as he could, from working out at the gym, salsa and bachata dancing, reiki healing, to Forex and stock exchange classes. One day he discovered the teachings of Vikas Malkani, author of ‘The Little Manual of Meditation’ and ‘The Little Manual of Happiness: 7 Simple Steps to a Joyful Life’. With no previous
experience in meditation, he asked Vikas if he could join Masters of Meditation, an advanced meditation class at Soul Centre, Singapore. Vikas’ response was a simple, “Yes, but you must do everything I tell you to.” And Danny did just that, regardless of how difficult and repetitive the tasks given to him were.

Danny succeeded in completing the Masters of Meditation class, and continued practicing until he became a Certified Meditation Teacher. He follows the teachings of his guru, Vikas, and passes on his knowledge to his students through story-telling and simple equations, which Danny loves to draw out and explain for you. I was lucky enough to experience his teachings first-hand and found his teaching style relaxing, clear and very helpful. The hugs are also a nice addition to the class, as we all need one now and then.

“There are many misconceptions around meditation,” Danny tells me. “Many people think it’s some mumbo jumbo holistic nonsense.” To the contrary, what Danny hopes to teach people are the tools and techniques to be able to incorporate the art of meditation into our daily lives, making inner peace, happiness, and healthy living an obtainable goal. “But you must be willing to put the hours through practicing what you learn in your own time, knowing that finding this peace is not something that happens overnight.” Danny will teach you how to put the time, energy and efforts into harnessing this ancient technique, if the will is there.

Danny’s classes, available in Kemang, start with Meditation Made Simple, followed by Meditation in Action, consisting of four sessions each, both two hours in length. If you are a beginner, or have had some experience in meditation, but are keen to know more, you must start with the Meditation Made Simple course, which will give you the fundamental basics you need. You can then move on to the Meditation in Action course, and if you would like to delve further, there is the Masters of Meditation course, which consists of 10 weekly 2.5 hour sessions, followed by an exam. For the first two courses, you will receive two best-selling books as part of your training and you will be in exceptional hands within a small group. The option to study one-onone is also available upon request. All courses are good value for money.

It’s clear that Danny has harnessed the power of the mind through meditation, as he has overcome almost every fear he has. Ask him about the non-conformist activities he’s done to overcome his fears. These include skydiving (sometimes only wearing a Speedo), fire-walking and body-piercing. A sky-diving guru? The opportunity to learn from someone like this doesn’t come around often, so grab it while you can and take that first step to living a better life.

Taking a Spin in Kal-Tim