“If you don’t like it here, then why don’t you go back to your own country?” Those are words that, I’m not proud to admit, I have said on a couple of occasions to expats moaning incessantly about Indonesia. I have also been on the receiving end of those very words. 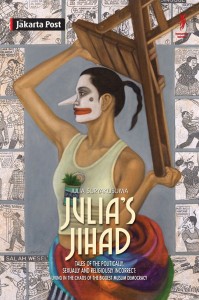 As foreigners, we are at risk of seeming condescending, insensitive or even racist, when we complain too much about things that bother us in Indonesia. Even though we only hope to see things changed for the better, constant griping is unbecoming – unless we’re prepared to take Indonesian citizenship. Fortunately, we have Julia Suryakusuma, a local columnist writing in English, who wages a war of words in defence of common sense.

Julia’s chief weapons are humour and a passionate level of political incorrectness. Here’s a sample from a column on noise pollution: “Prayer music?? That ungodly sound? No wonder atheism is on the rise.”

The best of her columns over the past seven years, from The Jakarta Post and Tempo magazine, have been collected into a hefty volume titled Julia’s Jihad, which was launched in Jakarta last month and in Bali last week.

Weighing in at over 500 pages, it’s not the sort of book you should attempt to digest in a single sitting. Some Westerners, especially the British, have the repulsive habit of keeping light reading material in the bathroom, to occupy their minds while emptying their bowels. Julia’s Jihad may therefore not be out of place in the bathroom, perhaps alongside a defaced copy of Soeharto: The Life and Legacy of Indonesia’s Second President. The latter could serve as bumph for those unaccustomed to a cebok (water dipper – it’s explained in one of Julia’s columns) – while the former is ideal for dipping the mind into, as each piece takes only a few minutes to read.

Julia is often described as a tigress. One wonders whether she used to have a career as a lion-tamer before unleashing her energy through writing. Her Australian husband, Tim Lindsey, mentioned in the occasional column, perhaps did not tame the tigress, but he has provided amusing illustrations for the book.

There are 110 columns, covering everything from lesbianism in Islamic boarding schools, to religious intolerance, to the local government candidate who forced his wife into prostitution to repay his campaign debts. Nearly all of the content would have been impossible to publish under the Suharto regime, which did not look fondly on the truth or constructive criticism. Interestingly, an Indonesian edition of the book was considerably shorter, as the editor sought to omit the most provocative stuff and instead opted for “the lowest alert” columns. A Korean translation of the book was also shorter, distilling Julia’s prose into its essence.

Julia is at her best when she’s angry. Many of us have trouble expressing our anger beyond some carefully chosen swearwords, but Julia weaves her wrath into columns that are insightful, informative and entertaining. The book is laden with puns, often accompanied by a ‘sic’ in parentheses, acting as a snare drum and cymbal crash (badum-tish!) in case anyone has missed the joke.

Julia’s Jihad is not pretentiously highbrow, academic writing. The only time I had to reach for the dictionary was in the preface by the Chief Editor of The Jakarta Post. The Post deserves kudos for publishing Julia’s essays, as no one else is so critical of crooked religious leaders and politicians. Her feisty style is quite different to the more reserved tone of The Jakarta Globe’s regular columnist Desi Anwar, whose equally thoughtful and incisive musings were bewilderingly subjected to cruel online attacks until the Globe redesigned its website recently.

There are almost a dozen glowing endorsements across the inside cover-flap and peripheral pages of Julia’s Jihad. One of them informs us Julia “is the voice of the masses”. Yet there are no columns about suffering a cramped busway ride that takes an extra hour when police are too incompetent to keep inconsiderate motorists out of the bus lane. There’s no mention of scavenging through rubbish and discovering a used syringe with your fingertip. What Julia does have is tremendous empathy for the masses, who are termed the wong cilik (little people).

At the launch of the book, The Jakarta Post’s founding Editor Sabam Siagian and the Pakistani Ambassador both advised Julia to tone down her criticism. The Ambassador singled out her attacks on Communications Minister Tifatul Sembiring as unfair. In one column, Julia berates Tifatul’s “obsession with pornography” and puts him in the same basket as the Islamic Defenders Front and terrorist mastermind Abu Bakar Baasyir. Sabam suggested that as she gets older, Julia should mellow and be more polite. Her ardent fans think otherwise.

A few minor typing and grammatical errors have made it into the book. But they are so infrequent to be inconsequential. All writers should have a flunkey to spot and fix their typing errors – but this is not a perfect world.

A daily dose of Julia’s Jihad is just the thing to soothe a soul troubled by the trials of living in Indonesia. It costs Rp.125,000 at Gramedia bookstores, which makes it much better value than Pak Harto: The Untold Stories. Get a copy for yourself and for friends who want to know more about Indonesia, its people and politics.

From London to the Jaks: A Fashionista’s Journey

A Journey into History at Tugu Hotel, Malang

Universal Care Clinic: Treatment from Within