The quaint district of the old Citadel Street, now Jalan Veteran, houses a few great secrets. For the epicures of Jakarta, Jalan Veteran’s Dapur Babah Elite, near Monas, is a well-kept haven a little ways away from the hustle and bustle of the newer parts of the city.

‘Babah’ itself is a term that came about around the colonial times in Jakarta to describe the fusion of the East and the West; when Dutch-influenced Javanese women married Chinese settlers. The half-breed mixture of the two cultures resulted in a new blend of rituals and spices in the kitchen. The Javanese women were familiar with many spices that are native to Indonesia; with the help of the incoming Chinese heritage, new flavours were introduced, creating a mixture we now call peranakan cuisine. Hence, the term ‘Dapur Babah’ (Babah Kitchen), where the food is derived from all things ‘Babah’. 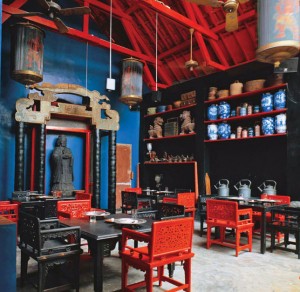 As I stepped in to the restaurant, greeted by friendly staff, a completely different Jakarta meets the eyes. Owner of Dapur Babah and its sister establishments of the Tugu Group, Anhar Setjadibrata, is a long-time collector of Indonesian antiques. So much so, that every room in Dapur Babah and the rest of the Tugu group restaurants – Lara Djonggrang, Samara, and Shanghai Blue 1920 – are designed to tell a specific story using the antique items he’s acquired over the years. The Garden area, for example, is a portrayal of the original Babah kitchen of the early 20th century; the pots and kettles displayed here are original pieces, and the Goddess Protector statue is typical of a Babah kitchen, as a deity figure that oversees the quality of the kitchen and its cooks. Dapur Babah has clearly chosen each item in the restaurant with careful consideration.

Dapur Babah adopts the philosophy of ‘Bringing art, soul and romance of Indonesia’ into its design. And it’s quite true; romance plays a big part in creating the atmosphere at Dapur Babah with its signature dimmed lights, cosy booths and the use of photographs of the Babah ladies from back in the day. The place is divided into a few rooms; the Kwan Im Room, where large party diners can have a private gathering, the Megawati room, Tao bar area, the Garden area, the VOC room, and the Angela Room. The Garden area is the only non-smoking section of the restaurant, as it is an open-air terrace area. Dapur Babah takes pride in having art, soul and romance not only displayed in the interior, but the food as well. Dapur Babah’s signature peranakan cuisine has roots in Javanese spices, the Dutch’s rich flavours, and Chinese sweet and spicy seasoning. All three languages were incorporated into the menu. As I was a first-timer, I asked for their specialty dish and drink. Rosiany Chandra, PR for the Tugu Group, recommended Nasi Tjampoer Babah with delight. But not before first ordering a drink; I went with the Mahadeva Garudasana and my brother went with the Sleeping Buddha. Mahadeva was very refreshing; a concoction of tea, muddled mint leaves, strawberry and palm sugar. The Sleeping Buddha was a delicious combination of soursop, milk, and vanilla ice cream. A bit too heavy for me, especially for dinner, nevertheless it was amazingly fresh.

After drinks, the appetizers were Tahoe Goreng Petis, fried tofu with sweet shrimp paste as the dip, Maccaroni Schottel and Bitterbaletjes. The shrimp paste used in Tahoe Goreng Petis was sweet and savoury at the same time, and well-paired with the fried tofu. Bitterbaletjes are round croquettes made of potato and meat that was very rich, but after eating it with the yellow carrot and cucumber pickle garnish, it was even tastier. But the winner of the appetizers, I would have to say, is the Maccaroni Schottel. It is simple ‘Mac and Cheese’, with a Dutch twist, that is usually overpowered by the heavy use of cheese, yet Dapur Babah used just the right amount that I could taste the texture of macaroni and ham, without it being drenched in cheese. Quite the comfort food! 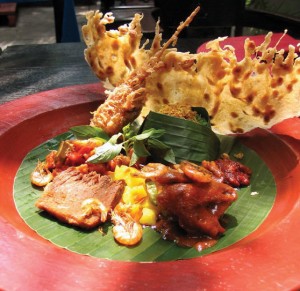 Then came the signature dish, Nasi Tjampoer Babah. We also had Petjel Pintjoek, a mix of steamed vegetables with peanut sauce and rice in a banana leaf, as well as Ikan Goreng Moelet Garing Boembon – fried fish that has been marinated in spices and grated coconut. Even the sound of it is mouth-watering. And yes, they were great! Nasi Tjampoer Babah consists of rice, complemented with nine different types of Javanese side dishes; from shrimp skewer to marinated beef and sautéed tempeh. Nasi Tjampoer typically uses white rice, but at Dapur Babah it is infused with Pandan leaves; making the rice green and lavish in aroma. Such a treat!

Dapur Babah is happy to offer a dining experience in which all your senses can be entertained. They even offer a Grand Selamatan Tafel in which the traditional Nasi Tumpeng – a cone-shaped mountain of rice and its side dishes, usually served at parties and feasts – is transformed into a ceremonial procession where Dapur Babah’s staff carry an augmented version of this dish in a palanquin and enter the room with fanfare. It is one of the most interesting dining experiences, I would imagine.

We finished the night with the famous Es Tjampoer Babah; shaved ice with young coconut, tropical fruits, coconut milk, and the unusual but delightful selasih seeds. Something sweet – but not too sweet – and exotic to end the night with.

Dapur Babah has a relaxed environment and casual dining attire is acceptable. It’s quite a place if you’re looking for a unique restaurant with great peranakan food. No doubt, Dapur Babah’s approach is ‘food with a story’. 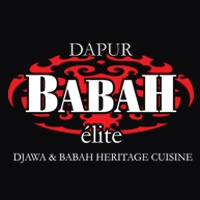