A year ago, a music-loving couple, Leo and Liz Sinatra, decided to stage a concert at their shop in Batubulan and just 48 hours before the show was due to start, the local banjar informed them that there was no way they could accommodate 1,200 ‘guests’ in their street. Within two days, a new venue was found, equipment set up, posters re-printed and with Bali’s underground communication system working at warp speed, the crowds came, the bands played and a splendid time was had by all.

Move forward one year, and this time round things were a lot different, as I discovered when I arrived at the venue in north Denpasar. Situated inside a huge walled field that now contained a giant stage (complete with large video screens on either side), police and security present in abundance, and a phalanx of pop-up stalls selling refreshments and band merchandise, this was no amateur hour.

Catching up with the organizers, Leo and Liz Sinatra, both of whom looked remarkably calm, was an absolute delight. This couple bubble over with boundless energy, enthusiasm and talent and their love for music knows no bounds! This year they managed to bring together a bigger and perhaps better concert than the year before (if that’s possible). With the success of this foray there is no doubt that Rock in Capital will be around for many years to come. 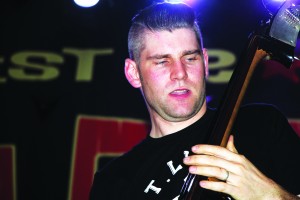 The event featured ten bands all in one spectacular location. To accommodate all the artists, the first act began playing at 4pm when the sun was still high in the sky. The crowd at that time of day was a little thin, however, Liz who was manning the gate whispered, “Paul, as they say, if you build it they will come.”

I snuck off to a little warung to grab some dinner, as the night ahead was no doubt going to be busy. Returning an hour or so later I realized that Liz’s prediction was spot on for there was barely enough room in the car park to slot my bike! Queues now stretched way back from the entrance, with eager patrons scrabbling to get inside before one of the big bands of the night, Superman Is Dead, began their set.

Making my way through the crowd, the place was jumping with JackKnife Blues in full flight, belting out some of the best — let’s call it country rock — I have heard in a while. The stage organization was flawless with a five minute break between acts, where a small army of black clad roadies descended, getting one band off and the next on and tuned up.

With little fanfare, one of Indonesia’s biggest bands suddenly took to the stage and they certainly didn’t disappoint. Here is a group that has come a long, long way since they formed in Kuta in 1995. This is Superman Is Dead (SID), and at last I had the experience of seeing them live. With several albums under their belt and tours to the USA and Australia, any early kinks in their sound had all but been eliminated.

This was a flawless and tight set and judging by the crowd knowing all of their lyrics, they have lost none of their star appeal; they certainly deserve their spot as one of the country’s best. Their early inspiration came from American band, Greenday and eight years on, in my humble opinion, they now far surpassed their mentors.

What I liked about this music festival was that even with a headline act such as SID, they were not the headline act, and after ripping through their set, there were lots more to come, even though filling their shoes was going to be a hard act to follow.

Not so, for Double Black, the Melbourne based rockabilly/rock band were flown in especially for this concert. Made up of Travis Demsey, Matt Black and Jason Skewes, this was a first for Bali’s music fans to get a taste of the rock/punk sound from down under.

It took a couple of numbers for the crowd to fully appreciate what they were seeing, but then the groove took hold and looking out over the crowd all one could see was a couple of thousand concert goers bopping to the rollicking beat! Jason Skewes antics with the double bass, Matt Black’s stunning guitar riffs and Travis Dempsey’s thumping drum rhythms, would bring even the most die-hard Ramones fans to ecstasy.

Maybe it was pure modesty that kept the Suicidal Sinatras’ late entrance to the stage (after all it was Leo Sinatra’s organization that brought this concert together) but they were certainly worth waiting for! I had the privilege of seeing this band at the first St. Lucas Concert in 2013 and if anything, these guys were better second time around. Leo Sinatra’s guitar playing was sublime and the band’s tight set was one that once again lifted the crowd to a virtual frenzy. Keep watching out for this bunch of talented guys, for there is no doubt we will be hearing a whole lot more from them. 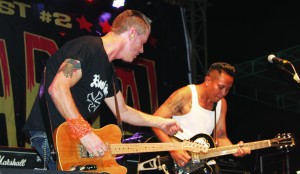 All too soon the concert came to its inevitable end and the organizers should certainly give themselves a pat on the back. As the crowd made their way slowly to the exit gates, one got a sense that they would have liked a lot more. However, noise restrictions in the Denpasar area dictated that the concert had to finish at a respectable hour and that rule was respected.

Still, seeing ten bands in fewer than eight hours, those that came certainly got their money’s worth. There is no doubt that Rock in Capital will become a permanent fixture on the Bali concert circuit. It deserves to for it was a sensational night out.

If I don’t get asked back next year, I’ll simply have to gatecrash!