Congratulations on your debut feature film “Crawl”. How does it feel to have completed such a big project which Paul wrote and directed and Benjamin produced? You guys must be so proud!
It feels really great. It’s difficult in the independent film world just to make a movie and it’s been a long project. It originally started as a different film called Howl which was going to be set in East Texas and was going to be shot in Canada as that’s where the money was coming from and as is the case in the independent film-making world, finance fell through so we ended up tweaking the script to be more of a suspense-thriller from black-comedy, paying homage to the film-makers we admired; Roman Polanski, Alfred Hitchcock, the Cohen Brothers. We just went for it guns blazing basically!

Has it been difficult at all working so closely together as twin brothers? Or has this been an advantage?
It was an advantage really, a hand-in-hand process. We’re very close and there’s no issue at all. We’re online and see eye to eye with everything.

Any telepathy involved?
We wish, but sadly no… Maybe on a subconscious level? Maybe we could film ourselves and make another movie out of that?

Paul, where did the idea for the story line come from and develop into such a dark, bloody thriller?
The original idea stemmed from a coyote of all things which turned into the original idea which was Howl, set on the border of East Texas. When it formed into Crawl we had an idea of three characters which were thrown together in devastating circumstances and we envisioned the film with very little dialogue with slow movements, carefully panned and creative shots. We just wanted to make something entirely cinematic. When it comes to film making, most film makers opt for the gritty hand-held style but we wanted to go to the other side of the spectrum in terms of cinematography and score. Essentially it’s a small story, but we wanted to tell this small story well. 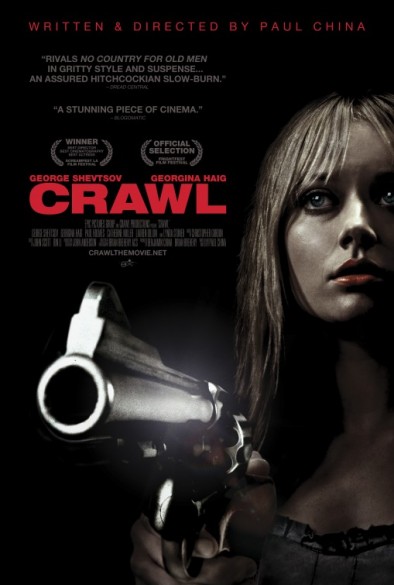 Crawl is influenced by the works of Alfred Hitchcock, Martin Scorsese and the Cohen Brothers. Can you tell me how these greats influenced your direction and vision?
One film which was a huge influence on the film was the first film by the Cohen brothers, Blood Simple, which is almost like a neo-noir western horror to a certain extent. They influence us because they are masterful story tellers. They have control and precision on every shot and line of dialogue which is what really intrigued u and inspired us to make intelligent and entertaining cinema.

What did you guys study at University?
We studied Film Studies at the University of Gloucestershire and the course was entirely theory-based so we pretty much watched films and talked about them for three years! We actually had no practical experience so when we set off to make Crawl we surrounded ourselves with the best possible crew we could attract. The first time we set foot on the set of Crawl was the first time we set foot on any set.

That’s awesome guys. And where did your love for cinema stem from?
We fell in love with movies, it’s our number one passion. We used to watch Western films at our grandfather’s house when we were seven and I think it implanted something in our brains.

So what’s next in the pipeline?
We’ve got three screenplays, one is a dramatic-thriller, another is a noir-crime thriller and another is a western that are already written and we’re heading to L.A next month to get them off the ground.

And do you consider yourselves the next Cohen brothers?
It’s been said a couple of times and a wonderful thing to say as we’re huge admirers of the Cohen Brothers. Maybe they’ve made that assumption because we’re brothers as well and our last name begins with ‘c’, but we’d also very much like to be known as the China brothers!

The China brothers has a certain ring to it!  Where did your last name come from?
Our grandfather did some research and we think it was a misspelling. It should have been Shrina or Shreena or something along those lines and was misspelled on a document. It’s an unusual last name but we love it!

So, you both spent time living in Jakarta whilst growing up didn’t you? Do you have any specific fond memories from Indonesia?
Yeah, we came to Jakarta in ‘92 when we were ten then left in ’98 and went back to England to finish school and university then went to Australia after that and have been here ever since. We loved our time in Jakarta and definitely remember going to the cinema every weekend! The time that we had in high school there was so great.

“Crawl” is now screening at cinemas in Jakarta. Can you give us some ideas of what to expect when we go and watch your film? Is pop corn a must and will I need to cover my eyes?
There may be a couple moments where you have to cover your eyes – it is a suspense-thriller, but there are some moments of light-hearted comedy and bits of horror as well, so we’re mixing up the genres. We want the audience to walk away questioning certain things, but not leaving them unsatisfied. It’s there for them to ponder over and we hope it sticks in their mind for a while after they watch it.

Do you think you will ever write, direct and produce a film in Jakarta or Indonesia?
We haven’t really thought about it yet, but obviously we’d love to come back and visit the place as we have such fond memories of the country. It’s impacted us greatly and the time we spent there were some of the best years of our lives without a doubt. Living with such an international community in such an amazing country was an education that money can’t buy.