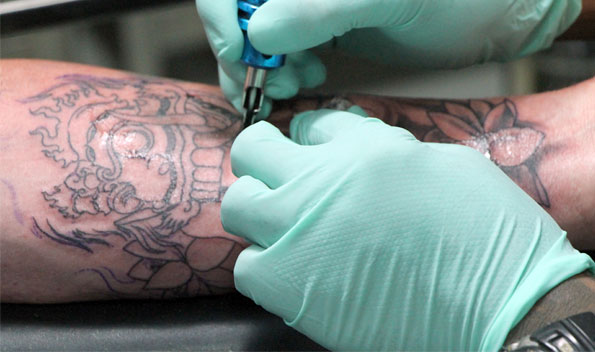 Hidden away in a modest apartment in Gifu, central Japan, 79-year-old tattoo artist Horihide (meaning to carve) is preparing his tools. Over the decades this supreme master of the art of the hand tattoo has been plying his trade inking the bodies of Yakuza members, geishas and several members of the Japanese royal family. Today he will begin work on a client who has waited 32 years for an appointment and has flown all the way from California to have the work done by arguably one of the best in the business!

Tattooing is exploding across the planet, especially among the 18 to 35-year age group, to the point where more than one fifth of the adult population of Great Britain have decided to adorn their bodies with images that are personal expressions of individualism.

Once the preserve of sailors, bikers and assorted deviants, tattooing has now definitely gone mainstream. Hardly a week goes by when we see in magazines, celebrities sporting their latest tattoo evoking a rallying cry with erudite quotes inked onto their bodies. Think Angelina Jolie, David Beckham and Robbie Williams to name but a few.

Tattooing has been around for centuries. When the ‘iceman’ was discovered entombed inside a glacier on the Italian/Austrian border, once thawed it was found that he had elaborate designs tattooed onto his chest, back and knuckles of both hands. Carbon dating revealed that this man died some 5,500 years ago meaning the art of adorning one’s body with imagery has been with us for quite some time.

In Indonesia tattooing arrived into Kalimantan centuries ago where the Dayaks adopted the practice thought to have migrated south from the Yunnan Province in China. Wearing tattoos was initially the preserve of men and it often symbolized the taking of heads. However in Dayak Kayan, it is mainly the preserve of the women who adorn their bodies with intricate designs. They follow the traditional application method of applying the inks using a thin bamboo shoot, which has been filed to a shark point and then ‘hammered‘ into the skin with a small mallet.

The English word Tattoo actually comes from the Tahitian ‘tatu’ where the practice of skin art originated in the South Pacific. The trend spread quickly to other South Sea Islands, where men in Samoa, Tonga, Fiji and New Zealand adopted the practice before weaving its way up into Indonesia’s southern archipelago.

In certain societies the tattoo was considered barbaric, as often only criminals were tattooed across their foreheads to show the crimes they had committed. However, the tattoo as art began to gain traction amongst even the elite of several societies. Marco Polo on his travels observed that, “Many come from as far afield as India, travelling to China to have their bodies painted with the needle.”

In Samoa, the tattoo is still sacred amongst men coming of age, where the skin from above the waist to below the knees is fully inked. This is known as Pe’a and is applied over many months using traditional methods of application, such as sharpened turtle shell or bones. A half completed tattoo on a Samoan man is a mark of shame, as it shows that the recipient was not able to complete the design and therefore did not pay the artist. 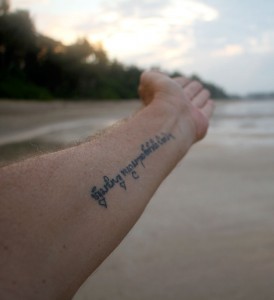 What is it today that makes one contemplate enduring pain in order to make a bold statement on one’s body that will accompany them to the grave? Walk down any main street or gang in Bali and more than often there will sit a tattoo parlour ready to apply any given design on whatever part of the anatomy you choose.

Rebelliousness? A rush of blood to the head? Too many tequilas at that last bar?

Whatever the reason, it seems that the steam of customers heading to tattooists is certainly not decreasing.

I recently visited an old friend, Apel Hendrawan, a renowned author, artist and tattoo artist who let me sit in on a session or two where he was applying an intricate design to the shoulders of a Dutch tourist who had travelled from Amsterdam especially to have work done. There is no doubt that there is a certain skill in applying a complex design to living flesh and there is absolutely no room for error!

Tattoos will always be with us and even if the trend dies off in the next few years, those discreet and not so discreet statements of one’s individuality will be on show for many years to come.

There is still perhaps a stigma associated with getting a tat’, “as if one has slipped down the food chain and joined the ranks of the criminal deviants or the lower classes.”

Not so. It’s an individual choice, as Clementine, wife of Winston Churchill once said when revealing a multi-coloured coiled snake that twisted up her the inside of her left arm.

In order to make this article a little more authentic, I felt I had to give it a whirl! Without a thought I hopped into Apel’s chair, rested my arm on a pedestal and watched while he applied a phrase in Balinese Sanskrit to my inner arm. It was akin to being stung several times by a swarm of bees, but once begun there was no turning back. The comments I receive are varied and many, but too bad, it’s there for as long as I tread this earth so I, and everybody else will simply have to live with it.