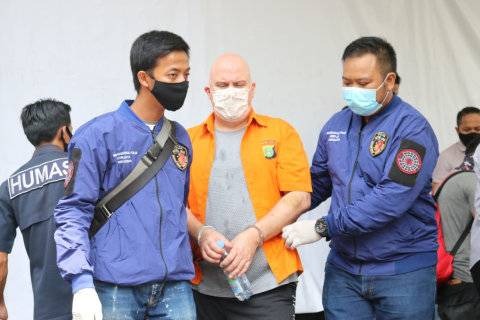 Police in the Indonesian capital of Jakarta have arrested a convicted American paedophile wanted by the US Federal Bureau of Investigation (FBI) for a cryptocurrency investment fraud case.

Russ Medlin (48) was arrested on Sunday (June 14) at a rented house on Jalan Brawijaya in Kebayoran Baru, South Jakarta. Police said he had abused three female child prostitutes, procured by an Indonesian pimp.

In a separate case, Medlin has been a fugitive from American justice since 10 December 2019, when Interpol issued a red notice for his arrest over his involvement in a Bitcoin investment swindle.

US authorities have indicted Medlin and four co-conspirators on fraud charges over the operation of BitClub Network, a Bitcoin mining investment vehicle that allegedly scammed investors out of US$722 million.

The alleged fraud took place from April 2014 to December 2019 in New Jersey and elsewhere. Members of BitClub Network each paid US$99 for exclusive access to Bitcoin mining opportunities, but authorities say the operation was a Ponzi scheme.

US authorities have already arrested three other people involved in running BitClub Network: Matthew Brent Goettsche (37), Jobadiah Sinclair Weeks (38), and Joseph Frank Abel (49). They face up to 25 years in prison if convicted of fraud.

Long before the Bitcoin scam, a Nevada court in March 2006 convicted Medlin of sexual assault against a 14-year-old girl. In June 2008, the same court found Medlin guilty of possessing child pornography.

Jakarta Police spokesman Yusri Yunus said Medlin was arrested after reports from the public that underage females were often seen entering and leaving his rented house.

Police raided the house moments after three females, including two girls aged 15 and 17, had exited the building and admitted they were paid for sex with Medlin. Police confiscated a mobile phone containing Medlin’s chats with a 20-year-old Indonesian pimp, identified by police only by as A. Yusri said police had identified three child prostitutes and were investigating how many girls had been procured for Medlin.

Police said Medlin paid the girls Rp2 million (US$140) per visit and had asked to photograph and film them.

Evidence seized by police included phones, laptops, and cash of Rp6.3 million and US$20,000. Upon examining Medlin’s passport, police discovered he was wanted by Interpol and the FBI.

Yusri said Medlin had been in Indonesia since December 2019 on a tourist visa and had begun renting the house in Kebayoran Baru three months ago.

Indonesian police have not yet said whether Medlin will be handed over to US authorities. If charged with child sex abuse in Indonesia, he could face from 5 to 15 years in jail and a fine of up to Rp5 billion.