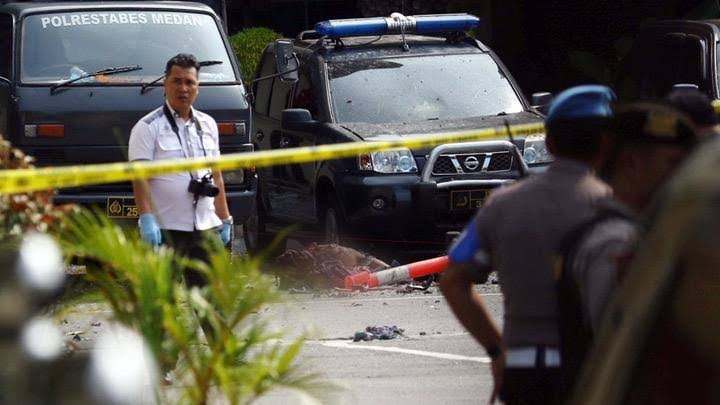 A suicide bomb in Medan

A bomb explosion occurred at the Police Headquarters of Medan, North Sumatra on Wednesday 13th November.

The headquarters have assumed that the explosion came from a suicide bombing by two people wearing online ojek clothing.

“Densus 88 and Regional Police of North Sumatra are investigating the incident,” Dedi Prasetyo, Head of Information of the Indonesia Police Headquarters, said.

The bombers are believed to have been killed in the attack and six people were injured – four police officers, a part-time worker and a member of the public.

Dedi said the police have not been able to give further information as the investigation is still in progress. The police have secured the location and set a perimeter cordon.

Prior to the explosion, the alleged bombers had been checked when entering the Police Headquarters of Medan. They were checked because of their suspicious actions.

“The alleged bombers have been checked twice because of the suspicious actions,” Tatan Diredam Atmaja, Head of Public Relations of Police Region of North Sumatra, said
When the incident happened, it is reported that many people were present at the location, waiting to register for their Certificate of Good Conduct from the Police.

The alleged bombers mingled with the people who were queuing to enter the gate. Shortly after, the explosion happened.