Schools across the country are preparing for a huge shift; beginning this next term, English will no longer be a required subject in Government primary schools. The outrage is, justifiably, large and there are fears that this will hurt the ability of Indonesian students to succeed in a globalized world.

This debate reminded me of my original interest in Indonesia. On one hand, there were the environmental riches of the country, the biodiversity, but I was also drawn to the human side. This was the country with the second most languages in the world, with so many religions, ethnicities, and beliefs scattered across its countless islands. I imagined, naturally, that Jakarta was a cultural mixing pot, and wondered if I would be able to tell the difference between Javanese, Sundanese, or Madurese if I heard it on the streets.

The history intrigued me too, especially the unique idea to make the national language not the most-spoken tongue, Javanese, but an easy to learn dialect that, for centuries before colonialism, allowed kunlun sailors to trade goods throughout Southeast Asia.

This was Riau Melayu (not related to the Sumatran province). It was an auspicious start. Unlike the similarly diverse Philippines, which made its national language the language of Manila (Tagalog) and created decades of discontent, or the many African countries that maintained colonial tongues, Indonesia chose a language that didn’t empower any particular people, nor the former overlords. In fact, at independence, few spoke the newly coined Bahasa Indonesia. It was, quite possibly, a third, more egalitarian way.

And then nationalism took over. Separatist movements in Aceh, Bali, Papua, and Timor led to the assertion and creation of a strong national identity under both Presidents Sukarno and Suharto.

Remember, the early leaders of Indonesia were European educated elites, who believed in very foreign concepts of Government and identity. The European nation-state was taught as being “natural” and “civilized” and at its base required there to be one, unifying, national language. It was language that drew most of the borders between countries in Europe. This was, of course, not an easy process, as Benedict Andersen’s seminal book, Imagined Communities, demonstrates. Even seemingly linguistically homogenous countries like France once had several competing dialects, and it took decades of education and coercion to invent the idea of a unified French nationhood. Even then, it didn’t succeed fully, as any proudly independent Basque speaker from the Pays Basque region will tell you.

Not surprisingly, this system was an ill-match for Indonesia, a huge, diverse country. What happened here was akin to uniting all of Europe as a single country and replacing all written languages and scripts with a simplified, easy to learn Esperanto. The scale – and the effects – was massive. 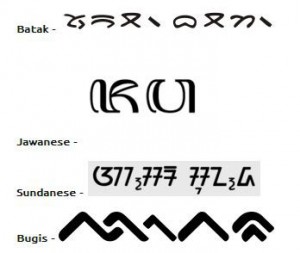 Did you know that, a century ago, Sundanese, Javanese, Batak, and dozens of other Nusantara languages had their own unique, beautiful scripts based on those still used today in South India? In fact, they look much like modern Khmer, Burmese, and Thai. Today, those scripts are essentially extinct, all replaced by Romanized Indonesian. To my dismay, I found that in Jakarta, nearly everyone uses only Bahasa Indonesia, and that my young Indonesian friends often didn’t know, or care about, their parents’ native tongues. Even those who do only use it at home, never on Facebook, Twitter, or other social mediums.

As writing disappears, speech will soon follow. Part of the blame is on education, which from the earliest age, is entirely in Bahasa Indonesia. While cursory local studies, including language, exist (less than two hours per week), they never include writing or reading. On top of that, all media is only in Indonesian or, increasingly, imported from abroad. This results in some sad facts, including one that stands out for me – Javanese is the most widely spoken language in the world without a daily newspaper, TV station, or radio outlet.

Why does this matter? There are many reasons. For one thing, ignoring local languages may harm the ability to properly educate youth, as study after study shows that you need to be able to speak one language well in order to learn a second language – and that, without this foundation, brain development can be stunted. By not allowing education in rich native languages, Indonesia is not only hastening the loss of its vibrant culture, but its future generation’s ability to thrive as well. Perhaps this is why the country, despite massive economic development, still ranks only 56th out of 66th in reading ability globally.

A possible solution may be taking shape in a fellow ASEAN country. Today, Vietnam is addressing the low-education attainment of its large minority populations by implementing mother-tongue education in some Hmong, Khmer and Jarai communities, and finding that this is dramatically improving test scores as compared to minority students forced to study in non-native Vietnamese.

There are other benefits to maintaining cultural diversity besides education. As I’ve written about in previous articles, Indonesia is still experiencing massive deforestation, and loss of its unique biodiversity. Studies show that, around the world, the places with high biodiversity also have high human diversity, and when one falls, so does the other. It makes sense – diverse knowledge systems embedded in culture create a strong, symbiotic relationship between humans and nature. Scripts, oral history, even verb tenses and idioms encode information. People and nature can build – and sustain – each other, as the Dayaks have in Central Kalimantan for centuries. It should be no surprise that, as forest cover disappears, Indonesia is also losing its languages. 12 have gone extinct since 1950 and 134 more are endangered according to UNESCO’s language atlas.

My proposal follows the Vietnam example – mandatory mother tongue education in the early years, a reintroduction of old scripts into daily use, followed by Bahasa Nusantara (Indonesian sans nationalism and more integrated with Malay) and English education built on the foundation of Ambonese, Banjar, Tetum, or another of the 400+ Bahasa Daerah. Multi-ethnic cities like Jakarta can follow a Canadian model, in which language instruction is offered in many (including immigrant) languages when student population reaches a high-enough level.

The alternative – a country of people who speak colloquially, but can’t read or write, their mother tongues, use Romanized Indonesian badly, and English not at all. In that scenario, the one we’re currently on, as the trees continue to fall, so will Indonesia’s cultural diversity, its two greatest assets slowly fading away.

No More Forest Fires in 2016? Good Land Use Management is the Key